The information tracks incidents through the 2018-2019 academic year. 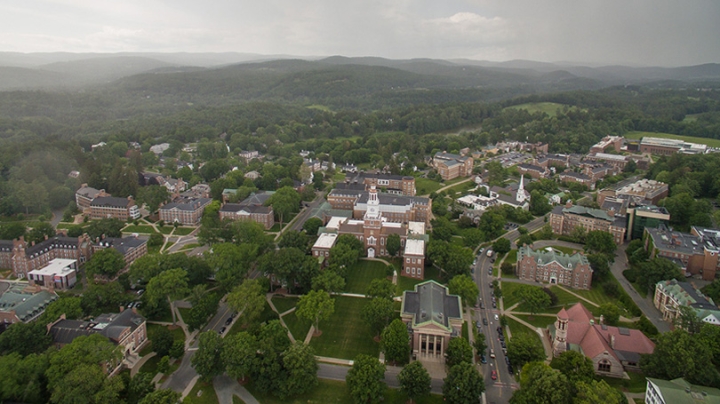 Dartmouth has released its latest data on the number of alcohol-related incidents involving undergraduates on campus. The new information, which tracks incidents through the 2018-2019 academic year, is available on the Student Wellness Center website.

“The data show several trends in desired directions, which is encouraging,” says Caitlin Barthelmes, director of the Student Wellness Center. However, she cautions that the numbers say little about the underlying causes of these trends.

The good news, Barthelmes says, is that the overall numbers of reported alcohol-related medical incidents, as well as the number of times students’ blood-alcohol concentration, or BAC, measured at near-overdose levels, are lower than at any point since the College started collecting data in 2011-2012.

“I am optimistic about the possibility that our prevention efforts may be having an impact on high-risk drinking on our campus,” she says. “However, we know numbers ebb and flow year to year. As a campus, we should continue to look more closely at possible mitigating factors that could be influencing the changes.”

The data track four measures: the number of alcohol-related incidents in which safety and security and residential life staff were involved; how many times students received medical interventions related to alcohol use from Dartmouth College Health Service and Dartmouth-Hitchcock Medical Center; how many of those medical encounters involved students with BACs higher than 0.25; and the number of “Good Samaritan” calls received by safety and security—that is, calls in which students request help for someone during an alcohol-related incident without risking College disciplinary action.

The wellness office also tracks alcohol-incident data by term, which allows the College to examine trends that may occur in specific terms.

“Comparisons across and between terms allow us to take a closer look at the impact of specific changes taking place in the community,” Barthelmes says. “The long-term annual data is useful for determining our overall trajectory.” 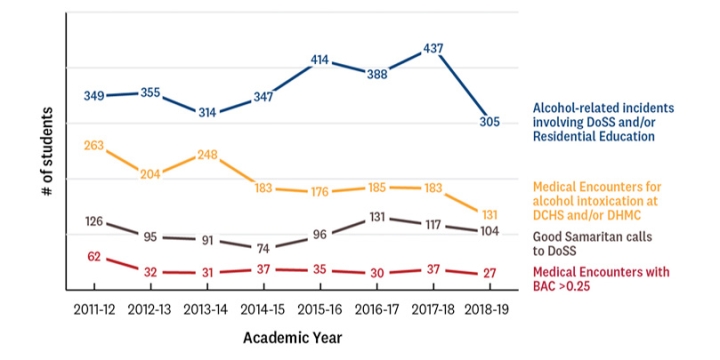 As part of the center’s effort to contextualize the data and encourage the community to have a fact-based dialogue about alcohol use on campus, Barthelmes and her colleagues are publishing a five-part series of reports on high-risk drinking and student well-being. The first three of these reports—“The Need for High-Risk Drinking Prevention,” “Expanding the Healthy Majority,” and “Changing High-Risk Behaviors: Individual Strategies”—are available on the student wellness center website. The other two reports, which focus on campus-wide strategies for changing high-risk behavior and on building community, will be posted before the beginning of fall term.

“The series was created to engage all members of the Dartmouth community—students, administrators, alumni, faculty, parents, and staff—in a dialogue around alcohol use,” Barthelmes says. “We want to give community members accurate, up-to-date information and data that can enable them to address the challenges related to high-risk drinking and its associated harms in an informed, collective way.”

The College’s efforts to understand and mitigate high-risk behavior are part of the challenge President Philip J. Hanlon ’77 set forth in the Moving Dartmouth Forward initiative, which was launched in 2015 to improve student safety and well-being.

Moving Dartmouth Forward established a ban on hard alcohol for undergraduates. Other initiatives include the health service’s alcohol-screening service; the creation of the Student Wellness Center in Robinson Hall; the Brief Alcohol Screening for College Students (BASICS) program, which helps students clarify their values about drinking; and the Dartmouth Bystander Initiative, which trains students to intervene when they witness others in high-risk situations.

Moving Dartmouth Forward is one of three key initiatives, along with Inclusive Excellence and the Campus Climate and Culture Initiative (C3I), aimed at creating a safe, welcoming, inclusive, and equitable environment for all students, faculty, and staff.