The professor of Spanish and comparative literature began her term July 1. 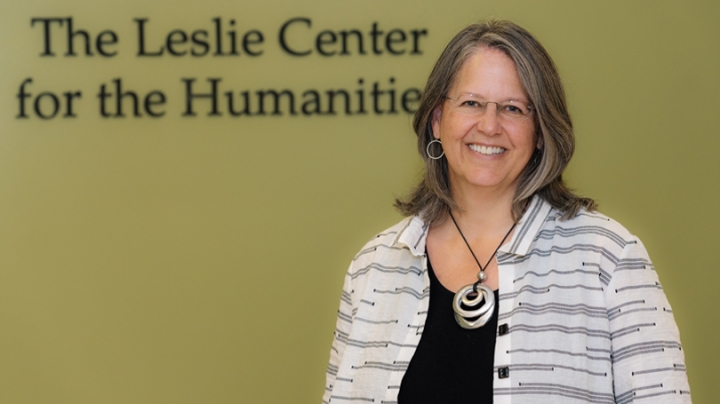 Rebecca Biron, a professor of Spanish and comparative literature and former dean of the College, has been named the next director of the Leslie Center for the Humanities, Associate Dean of the Arts and Humanities Barbara Will announced. Her term began July 1.

“Rebecca Biron is a strong advocate for the humanities both at Dartmouth and in the public sphere—exactly the kind of leader the Leslie Center needs,” Will says. “She is committed to continuing and growing the center’s work of promoting faculty scholarship and fostering student engagement.”

“The humanities underlie everything we think we know,” Biron says. “They are about the human experience: languages, symbolic systems, values, and human creativity—ways of knowing that allow us to understand not only ourselves but also the external world.”

It’s in this broad context that she sees the Leslie Center’s crucial function: supporting the work of the humanities at Dartmouth, on campus and beyond.

Among other activities, the center funds faculty and student research projects, sponsors interdisciplinary faculty working groups on a variety of topics, offers article and manuscript review opportunities for junior faculty to receive feedback, and is a funding source for guest lectures and other events on campus.

Her third goal, she says, “is to amplify Dartmouth’s institutional voice nationally and internationally on the value of the humanities.”

Since its founding in 1999, the Leslie Center has provided support to the humanities through colloquia, seminars, symposia, and conferences as well as activities for students, faculty, and visitors relating to the humanities.