Leading anti-violence scholars and activists will be on campus throughout the summer. 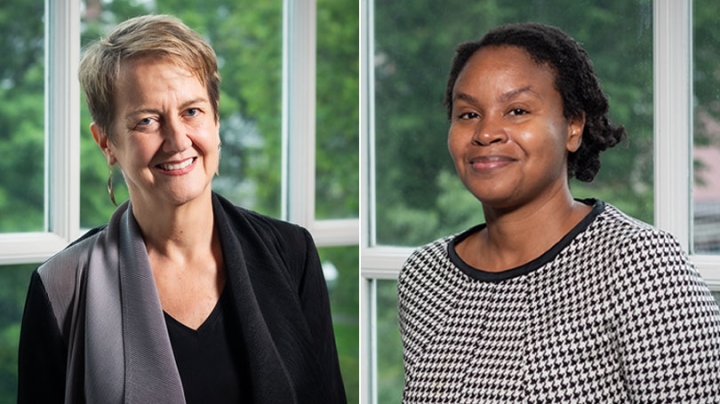 Organizers of the series are, left, Susan Brison, the Eunice and Julian Cohen Professor for the Study of Ethics and Human Values and professor of philosophy, and Shatema Threadcraft, an associate professor of government. (Photos by Rob Strong ’04)
7/05/2019
Body

This month and next, Dartmouth will host six public lectures to draw attention to the ways black women and girls are disproportionately subjected to violence in American society—and often ignored by social justice movements.

The series, “#SayHerName: Intersectionality and Violence Against Black Women and Girls,” will bring to campus leading scholars in the field—among them Columbia University and UCLA law professor Kimberlé Crenshaw, who coined the term “intersectionality” as a way of describing how people with multiple marginalized identities face overlapping systems of discrimination. In recent years, the concept has had a powerful impact on how scholars and activists analyze and combat social inequality and injustice.

The organizers of the series are Susan Brison, the Eunice and Julian Cohen Professor for the Study of Ethics and Human Values and professor of philosophy, and Shatema Threadcraft, an associate professor of government, who are both teaching summer courses in conjunction with the series. They hope “to have students talk to and hear from scholars who are on the pulse of what’s going on now in scholarship and activism,” Threadcraft says.

Brison says she and Threadcraft, who met last fall at a conference on the #MeToo movement, decided to collaborate on “a lecture series that centers the experiences of black women and girls because there has been very little focus on this in mainstream academic work. Even in popular culture and in legislative efforts there has been a totally insufficient focus.”

That’s starting to shift, Threadcraft says, as the public reception of the recent Lifetime documentary Surviving R. Kelly shows. Scholars like Crenshaw “have long understood that a middle-class approach to violence against women does not serve black women in disadvantaged neighborhoods, but the R. Kelly documentary and the context of the #MeToo movement have raised it to public consciousness,” she says.

In 2014, Crenshaw, in conjunction with the African American Policy Forum (AAPF), helped launch the #SayHerName campaign “to bring awareness to the names and stories of Black women and girls who have been victimized by racist police violence, and to provide support to their families,” according to the AAPF website. In her Aug. 1 talk, Crenshaw will discuss the importance of putting the experience of black women and girls at the center of efforts to change the culture around police brutality and sexual assault.

On July 9, Beth Richie, a professor of African American studies and head of the department of criminology, law, and justice at the University of Illinois at Chicago and author of the book Arrested Justice: Black Women, Violence, and America’s Prison Nation, will kick off the series with a lecture on “Black Feminist Responses to Gender Violence: The Case for Abolition Politics and Praxis.” (Richie is the sister of Dartmouth Board of Trustees Chair Laurel Richie ’81, who will join Beth after her talk for a conversation about their experiences as black women in academic leadership.)

Below is the schedule of events that, unless otherwise noted, will take place in Filene Auditorium in Moore Hall.

Aug. 8
4:30 p.m., Kristie Dotson: “Beyond the ‘Now’: Epistemic Oppression and the ‘Common’ Sense of Mass Incarceration”