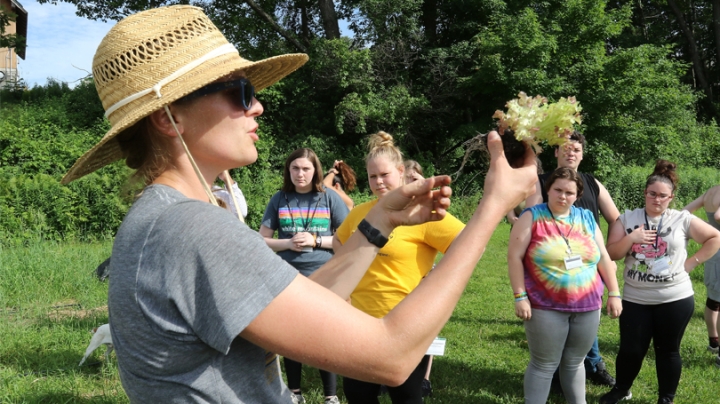 At the Dartmouth Organic Farm, SEAD scholars—who were on campus for a week in June to experience college life—listen as farm program manager Laura Braasch explains how to plant lettuce. (Photo by Herb Swanson)
7/15/2019
Body

The experience begins at the Moosilauke Ravine Lodge with ice-breakers, an evening bonfire, and a hike before the students arrive in Hanover for a week of classes, mentorship, and fun.

No—it’s not First Year Trips, but a more recent Dartmouth tradition: Summer Enrichment at Dartmouth (SEAD), a program run by the Dartmouth Center for Social Impact (DCSI) to help prepare low-income and first-generation high school students to succeed in college.

Over the next four years, this cohort of 24 rising juniors—from Stevens High School in Claremont, N.H., Rivendell High School in Orford, N.H., and Hartford High School in White River Junction, Vt.—will gather for a week on campus each summer to experience college life.

Now in its 17th season, this year, for the first time, SEAD’s mission will focus exclusively on students from Upper Valley schools. The shift is creating more opportunities for Dartmouth students to mentor the SEAD cohort throughout the school year and for Dartmouth to develop stronger ties with local schools and students’ families, says Caitlin Rosario Kelly, program manager of educational access and equity at DCSI.

“SEAD 2.0 is a pilot program in the sense that it’s now local—we’re working with all low-income, high-potential students in the Upper Valley,” Rosario Kelly says. “We’re thinking about what community building looks like for Dartmouth in the Upper Valley, but also what it looks like to shepherd students from low-income, rural backgrounds into the schools of their choice.”

Ashley Doolittle, associate director of DCSI, says, “We’re excited about the ongoing weekly mentoring component of the local model. We’ll be able to select a cohort of Dartmouth students who are committed to the school and the scholars for a year, and we will be supporting the scholars through their sophomore year of college—a bridge that can be hard for first-generation students. We can do that because we’re local.”

Teresa Alvarado-Patlán ’19, the student director of SEAD, knows firsthand how challenging it can be to navigate college admissions as a first-generation student. “When I was a junior in high school, there were many teachers who supported me during the college application process, but there were also some who did not believe in me and my worth,” she says, recalling a college counselor who doubted her ability to get into an Ivy League school. “I ended up applying to 27 schools by myself.”

“I didn’t have anybody to talk to about college before. This lets me know that I can go to college like all these people did,” Roach says.

During the week, SEAD scholars get a taste of college classes, taking courses on “Evolutionary Medicine,” taught by Assistant Professor of Anthropology Zaneta Thayer, and “Constructing an Argument,” taught by Senior Lecturer James Binkoski.

Alecia Thompson, a SEAD scholar from Hartford High School, says the courses have opened her eyes to the kinds of academic opportunities she might find in college. “It’s awesome—these are two things that aren’t offered in our schools. It’s opened me up to new ideas and opportunities. I realized that I actually really like philosophy.”

Cheyanne Pero, also from Hartford High School, says, “It’s helped me feel more confident. I’ve shown myself that I can take college classes and understand them.”

In addition to classes, SEAD scholars are learning leadership skills, visiting the jewelry studio and the organic farm, participating in coffeehouses and movie nights, and forming close bonds with each other—in short, enjoying a taste of college life.

“SEAD is about balancing what it means to live a full life in college,” says Rosario Kelly. “Even seemingly small things like visiting the library stacks are exciting and important for any first-generation student—and especially for students who maybe have driven by Dartmouth, but who have never been told that this is their home, too.” 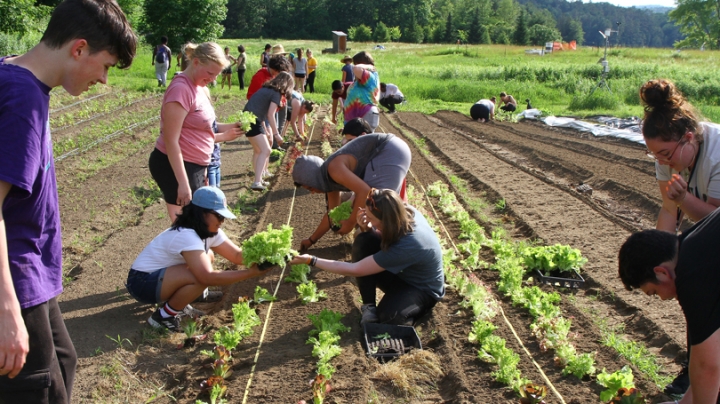 On their last full day on campus, SEAD scholars toured the organic farm, where they planted lettuce, made pizza in a wood-fired oven, and enjoyed an evening bonfire near the river. (Photo by Herb Swanson)

At a coffeehouse in One Wheelock, scholars share talents—from guitar playing to slam poetry—in a supportive environment that several scholars and staff describe as a highlight of the week.

“Last night I spoke up on stage in front of everybody, and I never would have done that a week ago,” Thompson says. “I feel like I fit in here. Everyone is so inclusive. I’m realizing there are other kids just as serious about college as I am.”

Faydra Richardson ’20, one of the Dartmouth student staff members, says the best part of the week has been watching SEAD scholars form close bonds with each other.

“At the start of the week they stayed in their own school groups and were scared to branch out,” Richardson says. “Now, as they’ve come together, they’re making friends, making plans for the summer. Seeing them break down those barriers and come together as a large SEAD family has been fun to watch. They are teaching me so much about being vulnerable and brave and stepping outside of your comfort zone—I feel like a better person having known some of them.”

Richardson and Alvarado-Patlán say the program has given them a new appreciation for the Upper Valley.

“As a Dartmouth student with very limited transportation, I never really had a chance to get to know the area,” says Alvarado-Patlán. “I am so happy that I got to know students from the Upper Valley.”

The SEAD scholars and their mentors spend their last evening on campus at the Dartmouth Organic Farm.

“Each SEAD scholar family will be receiving a CSA share from the farm, so we wanted to bring them here to see where some of the food that they’ll be enjoying is coming from,” Rosario Kelly says.

After touring the greenhouses, helping to plant lettuce, and making pizza with fresh-picked ingredients, they enjoy a last bonfire together. The next day, their families will come to campus to share a luncheon before they all go home. Though some of the scholars are sad to leave, this is the beginning of their SEAD experience, not the end.