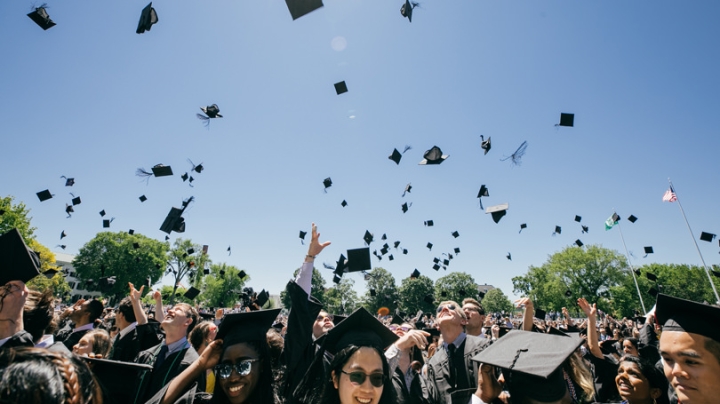 The new graduates celebrate in the traditional way. (Photo by Robert Gill)
7/19/2019
Body

Young alumni gave to the Dartmouth College Fund in unprecedented numbers during the fiscal year that ended on June 30, providing immediate scholarship support to undergraduates and—through their remarkable participation and the generosity of three members of the Class of 1978—expanding the College’s financial aid endowment by more than $1 million.

Inspired by a special challenge and the opportunity to make the dream of a Dartmouth education possible for students with demonstrated financial need, the number of young alumni who made a gift to the DCF during fiscal 2019 surged by more than 20 percent over the previous year, at a time when most colleges and universities across the country are experiencing flat or declining alumni giving rates.

A total of 8,823 alumni and seniors from the classes of 2000 through 2019 made a DCF gift in fiscal year 2019, including 1,367 first-time or lapsed donors. All of these gifts count toward the fundraising goal of The Call to Lead, Dartmouth’s comprehensive campaign.

Through the DCF challenge announced in early April, three members of the Class of 1978— Dave Hodgson, Rick Kimball, and Steve Mandel—pledged to establish a $100,000 endowed scholarship fund named in honor of each class that achieved a DCF giving participation rate of at least 45 percent in fiscal 2019. The three donors committed to increase the scholarship fund to $150,000 for classes that reached 50 percent participation.

With 10 classes surpassing the 45-percent participation threshold and three of those classes topping 50 percent, young alumni donors have secured $1.15 million for the College’s scholarship endowment, which will provide financial aid to talented students in perpetuity.

“Congratulations to all the young alumni who are continuing the great Dartmouth tradition of paying it forward, and a special thank-you to all the volunteers who worked so hard to make this challenge a rousing success,” says President Philip J. Hanlon ’77. “You are clearly stepping forward as the next generation of philanthropic leaders in the Dartmouth community, and your generosity will make the transformative power of a Dartmouth education possible for generations of students.”

The positive outcomes of the challenge are both immediate and far-reaching. Class volunteers noted that while the focus of DCF giving is principally to help current undergraduates, the challenge has changed some classmates’ attitudes about annual giving and has broadened Dartmouth’s long-term base of alumni support.

“The success of this challenge is definitely going to have a big impact for our class,” says Amanda Prentice ’06, head agent for the Class of 2006 and a Dartmouth College Fund Committee member. “We have a better sense that a 50-percent giving rate is an achievable goal, which I believe it is. We’ll always be able to point back to what we did in 2019.”

Jenna Sherman, president of the Class of 2008 and a DCF volunteer, says she expects the enthusiastic response to the challenge will translate into more robust annual giving well into the future, in part because of the number of alumni now re-engaged with Dartmouth.

“With the emphasis of this challenge on participation, we really made an effort to reach out to every class member, including people who hadn’t given in five years or hadn’t given since graduation,” she says. “Many, many of those people donated as part of the challenge. They were excited to participate and to give back to the College.”

Sherman and Prentice agreed that younger donors tend to want to see immediate impact when they make a philanthropic gift. “However,” Sherman says, “what’s great about an endowment is that it’s not only for the future. We’ll see benefit from the endowment this year.”

Prentice adds that the giving numbers in response to the challenge will also be inspirational. “This is going to have a great ripple effect for younger classes coming up because the bar is set higher now. They should be motivated by what we’ve accomplished.”

More than half of all Dartmouth undergraduates rely on scholarship support, and the average individual award is currently more than $53,000. Gifts to the DCF are the largest source of College financial aid and are essential as Dartmouth competes for outstanding young men and women with financial need.

Expanding accessibility and affordability through financial aid is a top priority of The Call to Lead. With a goal to expand endowed scholarship resources by nearly 50 percent through the campaign, Dartmouth seeks to:

Half of the 20 classes eligible for this DCF challenge achieved giving participation of 45 percent or more in fiscal 2019:

“Our class brought in 256 donors after the announcement of the challenge, nearly the total number of donors we had in all of FY18,” says Kenney. “I want to thank the members of the Class of ’78 who made this challenge possible. I’m incredibly proud of all the ’03s who made this happen and am delighted our class will make a difference for future Dartmouth students.”