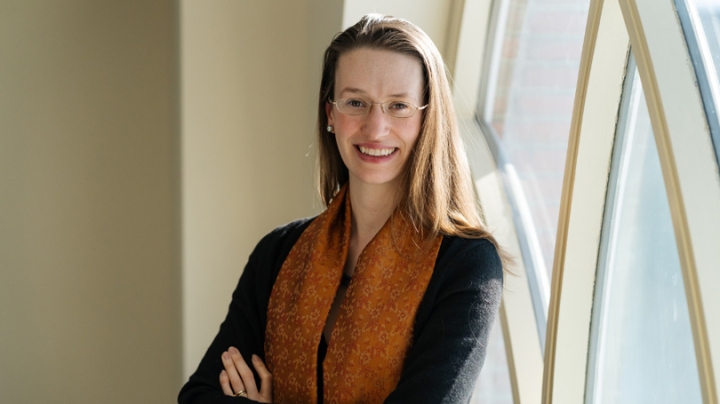 “Our collective goal at the center is to study autism in a holistic way—from brain to behavior,” says Assistant Professor of Psychological and Brain Sciences Caroline Robertson. (Photo by Eli Burakian ’00)
8/27/2019
Body

Caroline Robertson, an assistant professor of psychological and brain sciences, investigates the way people with autism experience the world.

For example, using virtual reality goggles and brain imaging techniques, Robertson and her colleagues are discovering how brain cells filter—or do not filter—nonessential visual stimuli that could be distracting to people on the autism spectrum. Robertson’s team is also finding nonverbal markers in the brain that can lead to early diagnosis of autism in children who are unable or too young to speak.

With a BA from Columbia University (2009) and a PhD from the University of Cambridge (2013), Robertson conducted postdoctoral research at MIT and Harvard before coming to Dartmouth in 2018. In collaboration with the Dartmouth-Hitchcock Medical Center and the Geisel School of Medicine, Robertson launched the Dartmouth Autism Research Initiative (DARI), which is devoted to understanding biomedical causes of autism while seeking to improve the lives of individuals on the autism spectrum.

Dartmouth News recently spoke to Robertson about her research and her plans for DARI.

Why is Dartmouth a good place to start an autism research center?

In the Department of Psychological and Brain Sciences and at Dartmouth-Hitchcock, I saw an opportunity to integrate research with practice, and I knew I would find gifted researchers and practitioners here who would rise to that challenge.

In particular, I have been lucky to work closely with the Behavioral and Neurodevelopmental Services Group at Dartmouth-Hitchcock (BANDS), especially Dr. Jennifer McLaren. BANDS sees over 350 unique individuals with autism each year, and the greater DHMC system serves over 900 individuals.

In addition, there are a lot of community organizations in this area that provide support for people on the autism spectrum and their families. And Landmark College, in Putney, Vt., serves students with different learning styles, including autism. I thought, if we built an autism research center at Dartmouth, we could be a hub in that set of spokes. We could learn about the brains of people with autism. We could engage actively with groups that are trying on a day-to-day basis to improve the learning and sensory environments that people experience in the Upper Valley.

What kinds of things are you hoping to learn about autism?

Our collective goal at the center is to study autism in a holistic way—from brain to behavior. We use neuroimaging to learn how the autistic brain is structured, so we can get at the root of the neurobiological differences that are markers for the condition. We also study behavior, using tools like eye-tracking, virtual reality, and basic sensory tests, so that we can understand how people with autism experience real-world environments and social interactions. Autism affects practically every aspect of a person’s experience—from sensory processing to movement to language and thought.

So what have you been learning that wasn’t known before about how people with autism experience day-to-day environments?

Ninety per cent of people with autism describe challenges with sensory processing—for example, hypersensitivity to touch or sound. We want to understand where these differences come from in the brain.  A paper that I published before coming here received attention in the news because it was the first link between a metrical behavior symptom in autism and a particular neurotransmitter in the brain.

That was remarkable only because we know so much about autism behaviorally and we know so much about the brain, but there’s been an enormous disconnect between the two. I made an observation using a visual perception paradigm in which people are attempting to filter irrelevant visual information—we think of it as akin to other types of sensory filtering. For example, to hold this conversation I have to filter out the footsteps we are hearing in the hallway. But sometimes people with autism have challenges with that kind of filtering. We showed in many different populations of people with autism a behavioral difference, which predicted their clinically-measured autism severity scores.

Are you talking here about GABA, the chemical needed to support this filtering process? You showed that even though it is present in an autistic brain, it doesn’t function in a way that allows for the filtering out of distracting stimuli.

Right. This was our big question. If GABA is there, why isn’t it loading onto this behavioral symptom? This is a deep neurobiological question that will take a long time to answer. What we are studying now are different receptors that GABA binds to in the brain, and how that binding process works—or doesn’t—in the brains of people with autism.

You and your team of graduate students and postdocs use virtual reality goggles to learn how people with autism engage in the “outside world”—as opposed to the more sterile environment of a scientific labs. Can you briefly describe a session like that?

What’s beautiful about VR is that we can put a person in a full 360-degree space and track their eyes as they look around a very realistic environment. These spaces have dynamism. There’s sound. Someone is talking, telling an engaging story, and what we’re interested in is what the individual chooses to attend to—how they “tune in” to relevant information like the story even if a fan is spinning around and there might be the sounds of dishes in the background. We want to have a better understanding of what it is about an environment that puts someone in a state of vulnerable social attention. We’ve also taken these VR headsets around the country and use them in peoples’ homes. The virtue of that approach is that otherwise, those people might be left out of studies because they may not be high-functioning enough to come into our lab.

You are also adapting actual environments in and around Dartmouth to help people with autism have low-sensory experiences. How is that working?

Yes, we’ve started working with local organizations to minimize large crowds and loud noises at special showings of movies and concerts, or in tents set up at farmers’ markets. With the Hartford Autism Regional Program (HARP), the Special Needs Support Center (SNSC), and Keene Perspectives, we’ve formed a group called Sensory UV, which has so far hosted a sensory-friendly movie at the Lebanon Opera house, another at the Nugget in Hanover, and a play at Blow Me Down Farm in Cornish, N.H. We’re also working to make an upcoming play at Northern Stage—The Sound of Music—more accessible to people on the autism spectrum.

You say you want to build bridges between research and real-world diagnosis and treatment. Why is that such a challenge?

The problem is that we don’t know how to screen for autism in an objective way. Although we are now able to recognize signs of autism in kids as young as 9 months old, on average in the country, the age of diagnosis is about 4 years old. An effort we can make from a scientific perspective is to identify simple, objective, nonverbal markers of autism, so we can create a bigger battery of tools for early screening.

Our other big challenge, as researchers, is to communicate to the public what we are learning, in an understandable way. From the neuroscientific perspective, there are lot of false theories out there about what autism is and what escalates different symptoms, and so forth. Science has a really important role to play to establishing what’s really going on and how we could possibly intervene in ways that improve lives. Conversely, it’s also really important for us, as researchers, to incorporate the voices and expertise of individuals with autism into our research—“nothing about me without me,” as we say.