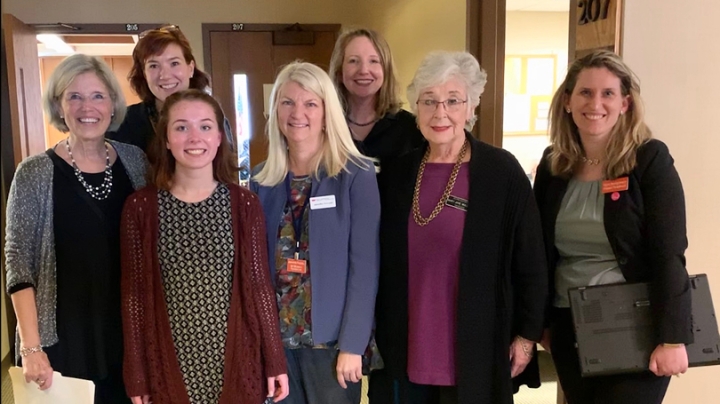 New Hampshire Gov. Chris Sununu on July 17 signed a bill, championed by a Rochester teen with help from Sen. Martha Hennessey ’76 and Associate Professor Deborah Jordan Brooks, to mandate that all middle and high schools in the state provide free disposable menstrual pads and tampons in female and gender-neutral bathrooms.

Caroline Dillon, a high school senior from Rochester, N.H., learned about “period poverty,” the term for the stigma and disruption experienced by women and girls who can’t afford menstrual hygiene products, as part of a school project. She enlisted the help of Hennessey, a state senator representing Hanover and Lebanon, to draft and sponsor a bill, and Brooks from the Department of Government, to provide expert testimony.

“I’m just really happy that Gov. Sununu made this choice that’s going to help out a lot of people and really make New Hampshire a leader in the country in women’s health and supporting students in school,” said Dillon after her bill became law.

Brooks, who with her students established the Dartmouth Global Girls Forward Lab, which has been researching and sharing information about global menstrual health, says with the passage of Dillon’s bill, New Hampshire became the fourth state, after California, Illinois, and New York, to provide free menstrual products in public school bathrooms.

“This bill illustrates the power of women to come together in politics to produce needed change that can otherwise be missed by mostly male political institutions,” Brooks says.

Since the passage of the bill, Brooks, who testified before the committee deliberating on Dillon’s bill, says she has heard from many people around the world who are interested in passing similar legislation in their own countries, and who are looking for information on where to start.

Brooks says the effort in New Hampshire not only helped to provide a template for those who want to pursue legislation elsewhere, it also illustrates the importance of opening a public discussion on menstrual health issues.

“During and after the hearings on the bill, several male legislators indicated that they had not thought about this issue before, and that after having heard about it, now see the need for measures to be taken,” says Brooks. “Put another way, many were entirely open to the idea, but no one had ever talked to them about it or asked them to make a decision on the matter.”

After the hearing at which Brooks testified, the committee on education and workforce development voted to recommend the bill for passage, and the proposed law passed both the New Hampshire House and Senate with bipartisan support before Sununu, a Republican, signed it on July 17.

“SB 142 will help ensure young women in New Hampshire public schools will have the freedom to learn without disruption—and free of shame or fear of stigma,” Sununu wrote.

In discussing the steps that went into putting forward the New Hampshire bill, Brooks and the students in her lab stress, on the IMHER website, that opening a public discussion is valuable.

“Exposing decision-makers to issues facing girls and women can have power, regardless of the short-term outcome of any given piece of legislation,” Brooks says. “Even if this bill had not passed, it still would have been an important step forward that people in positions of political power were given a chance to learn about an issue than many had never thought about before.”