Students can control how they are known in Dartmouth’s information system. 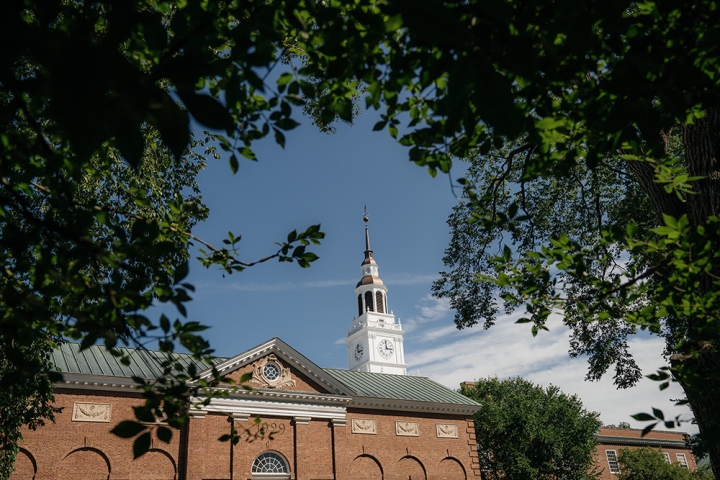 When students return to Hanover this month, they will have the option to choose the name, pronouns, and gender identity by which they wish to be known on campus via DartHub, the landing page for Banner, Dartmouth’s student information system.

“As a community, Dartmouth recognizes that it is important for students to be known by the names they choose,” says Provost Joseph Helble. “The College now has the infrastructure to make it easy for students to make their chosen names known.”

Since 2007, trans and nonbinary students have been able to request IDs and directory listings that reflected their preferred name, but now all students will be able to log on to DartHub and make desired changes on their own, says Registrar Meredith Braz, who has spearheaded the Chosen Name and Identity initiative.

“I have learned over the years what it means for some students to be able to choose their name. It can have a big impact. So it means a lot to me that we can do this,” says Braz, who notes that last year’s Banner upgrade gave the College the technological capacity to build the new self-service system and expand the reach of where the information is displayed. “Students have been asking for this for a while, sometimes even before they matriculate. It’s the right thing to do.”

Braz expects two groups of students will especially benefit from the new policy: trans and nonbinary students whose gender, pronouns, and chosen names may differ from their legal documents, and international students who prefer to be known by an Americanized name while they are studying in the United States.

But any student can take advantage of the opportunity. “We have people who might go by ‘Dave’ instead of ‘David.’ Some people go by their middle names. Until now, the system has only allowed them to use their legal names,” Braz says.

Chosen names will appear in Dartmouth’s online directory. Students can elect to receive a new identification card that reflects their chosen name, though they are not required to do so. They can also select which name—chosen or legal—they wish to have appear on official College documents, such as transcripts, diplomas, and the commencement program. And students can manage changes to their chosen name designation up until they graduate.

Braz encourages international students to consult with the Office of Visa and Immigration Services (OVIS) about the implications of using a name other than the name on their passport and visa for their transcripts and student identification. All students, however, should consider carefully before they elect a change. “This is your chosen name within the Dartmouth community, but when you leave here, there might be consequences if your ID doesn’t match your official identification, like your driver’s license, for instance,” she says.

For most purposes, a student’s chosen name will be the only name members of the Dartmouth community see. But a handful of administrative campus offices will still have access to students’ legal names. These include accounts payable, athletics, campus billing and DartCard services, Student Affairs, financial aid, human resources/student employment, institutional research, OVIS, payroll, the registrars’ offices, and safety and security.

Developing and implementing the new policy involved stakeholders from around campus, Braz says. “This is an institution-wide change, so there have been many details to work out. It affects everybody.”

Working with Sam Cavallaro, the director of student and academic systems in the Office of Information, Technology, and Consulting, the group gathered questions and feedback from departments across campus. ITC partnered with students at the Digital Applied Learning and Innovation (DALI) lab to design and develop the new DartHub student profile.

“I’ve been heartened by the enthusiastic response—people are excited about it,” says Braz. “Senior leadership of the College has been totally supportive.”

To learn more about the new policy, visit the Chosen Name and Identity website. Later this fall, faculty will have the opportunity to learn more about chosen name, pronouns, and gender identity at a session hosted by the Dartmouth Center for the Advancement of Learning (DCAL).