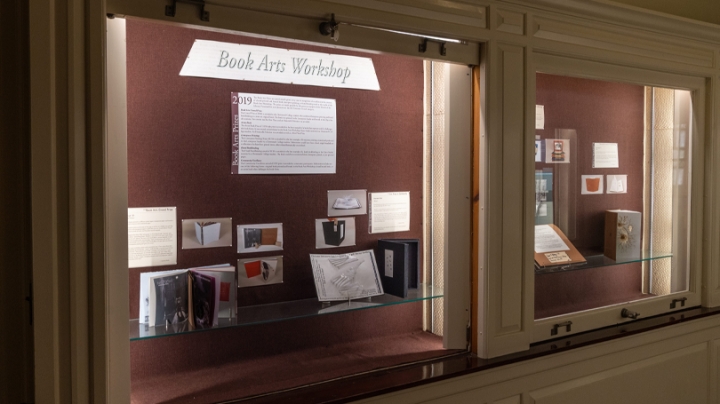 The winning books are on display at the Dartmouth Library’s Baker-Berry Library. (Photo by Eli Burakian ’00)
9/12/2019
Body

Jackson Rich ’21 loves Kanye West’s music so much that he made a handbound booklet featuring images and lyrics from each of the singer-songwriter’s eight solo studio albums. Rich’s project, “Progression of Kanye” won the $500 grand prize in the 2019 book arts contest sponsored by Dartmouth Library’s Book Arts Workshop. 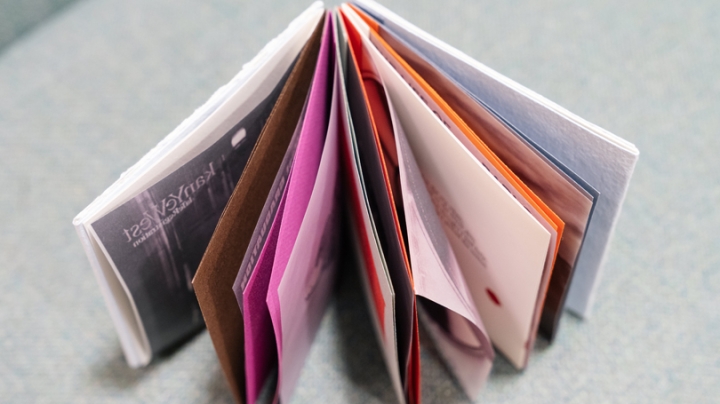 “I have always been interested in music, specifically rap and hip-hop,” Rich says. “Kanye West, despite his political views, is my favorite musician. … He has a unique, intriguing musical and lyrical progression, which is why I made him the focus of my book.”

Rich’s prize was one of four awards and two honorable mentions given this summer to Dartmouth Library patrons—primarily students—who created handbound books and broadsides. The winners are on display in the Dartmouth Library’s Baker-Berry Library, in the corridor leading to the Treasure Room.

The Book Arts Workshop, in the library basement, was created in 1989 to honor Ray Nash, from Royalton, Vt., who taught book design, typography, and calligraphy at Dartmouth from 1937-1970. Director Sarah Smith oversees the workshop’s hands-on seminars in the art of printing and bookbinding.

Many people come away from the workshops with a new or deepened appreciation for books made by hand, says Smith. “Several of our students have gone on to buy their own printing presses, and one has even started a letterpress printing business.”

Rich discovered the workshop while working on a project for his comparative literature class “History of the Book,” taught by Associate Professor of English Alexandra Halasz. The workshop complemented the class, Rich says, teaching him to appreciate the level of detail involved in creating a book.

“Every letter is placed the right way, and the spaces are all even,” he says. “Every time I look at a book now, I appreciate the work that goes into it.”

Smith says Rich and the other contest winners showed creativity, craftsmanship, and attention to detail.

“The judges looked for something that wowed them. Something different,” she says.

“In this project, I wanted to accentuate William Carlos Williams’ playful word choices and orderly arrangement,” Song writes in the description accompanying her submission.

Spring Yu ’19 received the artist book prize for her piece “Under the Light of the Two Moons,” a narrative pop-up book with black-and-white text set against a black backdrop. “Book art is a great medium for the things I am interested in—art, craft, storytelling, and interaction between object and viewer/reader,” she writes in the description accompanying her submission.

An honorable mention for the artist book prize went to Alice Crow ’22, who created an accordion book with hand-drawn ink images. 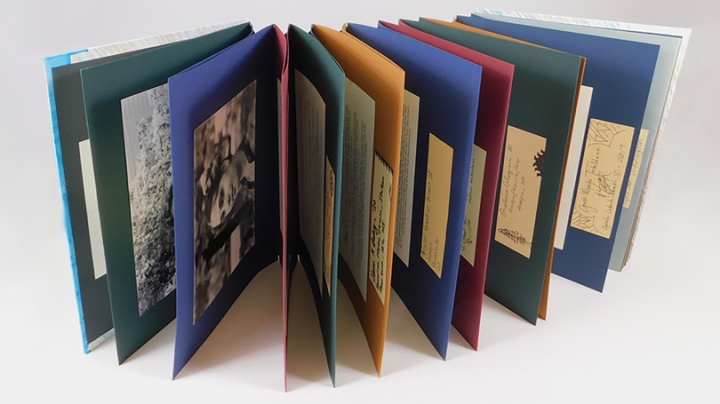 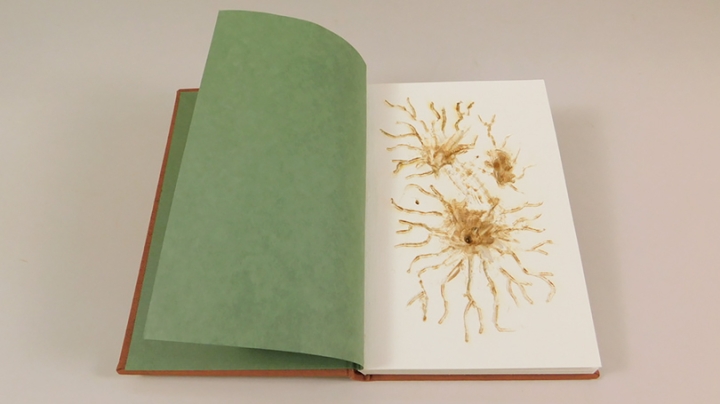 Honorable mention for bookbinding went to Kyle Carlos ’21 for his project, “Depth.” Carlos used a drill to cut and burn through pages of a handbound book, aiming for “both a visual and an aromatic experience.”

The community prize was given to Harriette Yahr ’87 for “Wonder,” a handbound pop-up book that pays tribute to her late brother.

“My hope is the project brings people closer with its hidden messages—the ones you have to discover, by exploring and looking closer,” she says.