At Dartmouth, Shaheen Holds Forum on Youth and E-Cigarettes 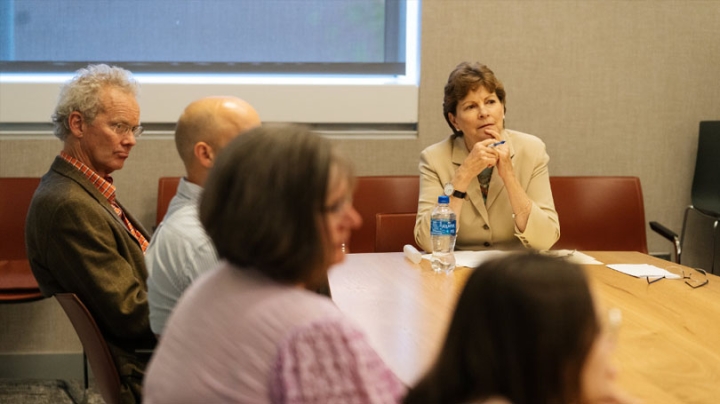 The event, held at the Hood Museum of Art, came as the Centers for Disease Control and Prevention confirmed three deaths linked to vaping-related lung disease and the Federal Trade Commission launched an investigation into the youth marketing practices of e-cigarette company JUUL. Earlier this year Shaheen introduced a bill that would require e-cigarette companies to help fund federal prevention efforts and regulate enforcement.

At the meeting, Shaheen pointed to the groundbreaking work of former Surgeon General C. Everett Koop ’37, whose 1982 Surgeon General Report on Smoking and Health definitively established the link between cancer and smoking, as an inspiration for her E-cigarette Youth Protection Act.

“I was thinking about what made the difference in smoking in America. It was all those CEOs finally having to admit that they lied (when) saying they didn’t know what impact smoking has on health. And we need a similar kind of thing. We need that kind of research to show what’s really happening as a result of vaping in the U.S. That it’s not safe.”

Kaycee Reagan, a student at Woodsville High School and a member of the Governor’s Youth Advisory Council on Substance Misuse, said vaping and the use of JUULs is widespread in her school, where flavors like mango and mint are hugely popular. Some parents even buy JUULs for their children because they believe the marketing that vaping is safer than smoking, Reagan said.

“It is definitely marketed toward youth. We’re especially concerned about how it’s marketed through Instagram influencers. And we’re concerned that the harm is discounted not just among students, it’s also among parents. They think, well, if they’re JUULing, they’re not smoking,” said Reagan.

Sai Cherala, a physician with the New Hampshire Department of Health and Human Services, framed the issue, noting that in 2010 HHS was not even aware of the issue of vaping among high school-aged youth. By the 2017-2018 school year, self-reported e-cigarette use had risen to 23 percent of high school students, she said.

“Over the last four years, first-year students’ reported use of vaping and e-cigarettes has gone from about 4 percent to 12.5 percent, and regular cigarette smoking has gone from 4 percent down to 2 percent,” Bowden said.

While Dartmouth has campaigned for many years to achieve a cigarette-free campus, vaping as an issue arose only in the past few years. It was just last year that the College included vaping in the no-smoking rules in administrative buildings and dorms on campus, Bowden said.

While the harms of smoking are well documented, there is little data about the effects of e-cigarettes.  So, while vaping may be helpful for people who want to quit smoking, it can provide a gateway to nicotine addiction, Sargent said.

Shaheen said she hopes her bill will provide a first step by requiring e-cigarette companies to fund research and prevention efforts among youth and help fund work to establish data to be used in regulating the industry.

As the number of deaths linked to vaping mounts, the urgency of that work becomes more obvious, said Sargent.

“Anyone who makes a product that people inhale into their lungs needs to be regulated,” he said.