Dartmouth Welcomes the Class of 2023 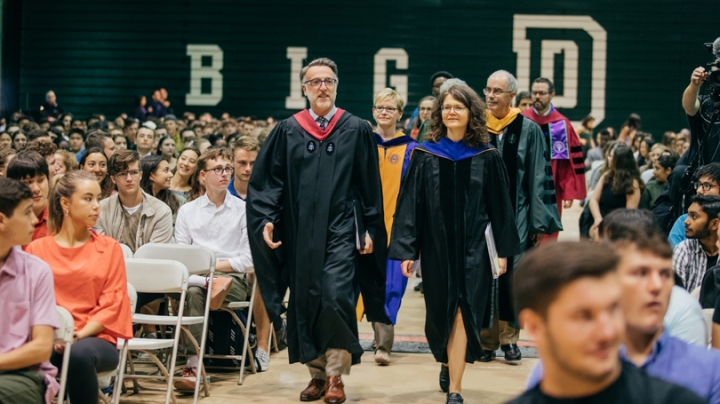 From left, Dean of Admissions Lee Coffin, Dean of the Faculty Elizabeth Smith, Dean of the College Kathryn Lively, and President Philip J. Hanlon ’77, lead the procession at the beginning of the ceremony welcoming the Class of ’23. (Photo by Robert Gill)
9/11/2019
Body

“I am a woman who refuses to lower her voice.”

“Playing trombone is my form of rebellion.”

“I’m a transgender kid in the rural Midwest.”

“I have birthed some baby goats.”

Lee Coffin, vice provost and dean of admissions and financial aid, offered a collective biography of the Class of 2023—drawn from their own words—during a community welcome today at which he formally passed the newly enrolled Dartmouth students from his charge as admissions chief to Dean of the College Kathryn Lively.

“You are a dynamic collection of 1,193 individuals drawn from 952 high schools around the world. You join us from families in all 50 American states—with Californians representing 11 percent of the class—D.C., Guam, and Puerto Rico as well as 25 tribal nations and indigenous communities. Bolivia, Cambodia, Germany, Kenya,  and Turkey are five of the 51 countries across every inhabited continent represented among you,” Coffin said.

Lively welcomed the students on behalf of the faculty and staff of Dartmouth College. “Each of you brings your own interests, backgrounds, talents, identities, concerns, and motivations to your College experience. At the same time, you all have one core thing in common: Your job here is learning.”

Coffin, Lively, President Philip J. Hanlon ’77, and other alumni, faculty, and administrators greeted the Class of ’23 at the ceremony, held in Leede Arena. It was the second day of orientation, and the Class of ’23 ended the hour-long ceremony by linking arms and singing the alma mater together for the first time before being dismissed in groups based on their house community for a gathering with their house professors. Each professor was introduced from the stage to cheers from their newest members, as each of the six house communities seemed to compete to make the most noise.

The ’23s are the fourth matriculating class to participate in the residential living system established in 2015 as part of the College’s Moving Dartmouth Forward initiative. Each house—Allen, East Wheelock, North Park, West, School, and South—consists of a cluster of residential buildings and a faculty residence nearby.

President Hanlon began by reminding the class that joining an academic community means they are joining an enterprise dedicated to inquiry and truth.

“As a member of an academic community, you have an overriding obligation to set aside any biases or preferences of your own and approach questions with a truly open mind,” Hanlon said.

“Throughout this process, what you will learn is the search for truth is a team sport if there ever was one, most effectively done when ideas and opinions are exchanged in an open respectful manner. And importantly, you’ll learn something that is backed up by decades of rigorous research. That the deepest understandings, the most effective analyses, the most accurate predictions are achieved by groups of people who bring diverse perspectives to the table.”

The next four years will be the adventure of a lifetime, Hanlon told the Class of ’23. “And you can expect nothing less than that the quality of your mind will be transformed for the rest of your life. Welcome to Dartmouth, and best of luck to you all.”

Colin Calloway, the John Kimball Jr. 1943 Professor of History and Native American Studies, shared some of the College’s history in acknowledgement of the 250th anniversary. Eleazar Wheelock founded Dartmouth in the heart of Abenaki country as a school for Native Americans, Calloway told the new students. It was built on the money raised by Wheelock’s student, Samson Occom, a Mohegan and ordained minister. But once a charter was granted, Wheelock forgot his original mission, Calloway said.

Then, in 1970, Dartmouth was rededicated to its original mission. In the past 50 years, more than 1,000 Native American students have graduated from Dartmouth, more than at all of the other Ivy League schools combined.

“So as we sit at this moment, and the College looks to its next 250 years—and you are the beginning cohort of that—we need to recognize the deep history of this place,” Calloway said. “To recognize that Dartmouth sits on indigenous land, to acknowledge that none of us would be here without the efforts of an Indian preacher, and to appreciate that you, the Class of 2023, like all Dartmouth classes, stand on the shoulders of those very few first Native students.”

Dean of the Faculty of Arts and Sciences Elizabeth Smith left the students with a suggestion. “I would also ask that you approach this experience with humility. No single individual, here or elsewhere, is more important than another. Both inside and outside of the classroom, listen to each other, learn from each other, take care of each other.”