Delving Into the Unknown: In the Cosmos and at the College

Astronomer Jedidah Isler leads the Shared Academic Experience for the Class of 2023. 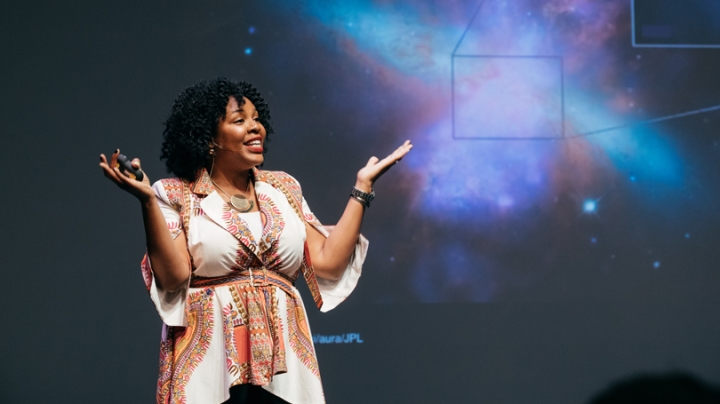 Jedidah Isler, an assistant professor of physics and astronomy, delivers the 2019 Shared Experience lecture to the Class of 2023 in Spaulding Auditorium. (Photo by Robert Gill)
9/17/2019
Body

Now that the members of the Class of 2023 are back from their team-building first-year trips, they’re embarking on a different sort of adventure—a foray into the cosmos.

This year’s Shared Academic Experience program, aimed at spurring community dialogue and personal reflection, was led by Assistant Professor of Physics and Astronomy Jedidah Isler. The first African-American woman to receive a PhD in astrophysics at Yale University, Isler studies blazars—supermassive black holes at the center of galaxies that spin up jets of particles moving at nearly the speed of light.

Last Thursday, Isler, who joined Dartmouth’s faculty in 2018, invited a capacity crowd of first-year students at Spaulding Auditorium at the Hopkins Center for the Arts, and others watching by video from the Hop’s Moore Theater, onto the cutting edge of astrophysics. In April, astronomers performed computer analysis on observations from a worldwide network of radio antennas, called the Event Horizon Telescope, to capture the first-ever image of a black hole.

Isler frequently used humor to explain what is known and unknown about this cosmic abyss in the Messier 87 galaxy in the constellation of Virgo, almost 55 million light years away from Earth.

Showing colorful, doughnut-shaped images created from the Event Horizon data, Isler spoke about how black holes can be formed—sometimes (but not always) by the collapse of giant stars—and how they can merge. She also related Einstein’s theory of relativity to the latest findings on black holes.

“And why do we care?” she asked. “Because black holes are awesome. And beyond that, they’re ubiquitous. Black holes, we think now, are at the center of every massive galaxy known in the universe.”

To prepare students for the lecture, Isler had posted reading material and other media on Dartmouth’s classroom technology website, Canvas. Following her presentation, many asked questions that, she said, were excellent.

She concluded by noting that college, too, can seem like a vast unknown, at least at first, and offered tips for navigating higher education with common sense and courage.

First, she said, paraphrasing the late author Toni Morrison, “If the book you want to read doesn’t exist, write it.” Astronomers, for example, are writing “the book” of black holes, and she urged the Class of 2023 to make their own discoveries.

“And welcome your new self,” she added. “College is an opportunity to make a new start, and you don’t get that opportunity many times in life.”

Finally, Isler advised, “Rest when you need to. But also wrest—fight for—what you want.”

Dean of the Faculty of Arts and Sciences Elizabeth Smith, who attended the lecture, said Isler was an ideal choice to lead this year’s shared experience.

“This is a stellar scientist who cares about promoting women in STEM fields,” Smith said. “As for her topic, I think, for students, it’s important to think and really feel that they are part of something bigger than themselves. To be inspired by awe and wonder, but also know that they are not alone in this world.”

To drive home that point, on Friday night Isler and two colleagues from the Department of Physics and Astronomy, Associate Professor Ryan Hickox and Assistant Professor Elisabeth Newton, gathered more than 100 students—including many from the Class of 2023—to peer at the sky through telescopes set up on the Green.

Our existential problems right now are rooted in the very real climate crisis, which we must address immediately.