With impact visible across campus, The Call to Lead sets sights on unfinished goals. 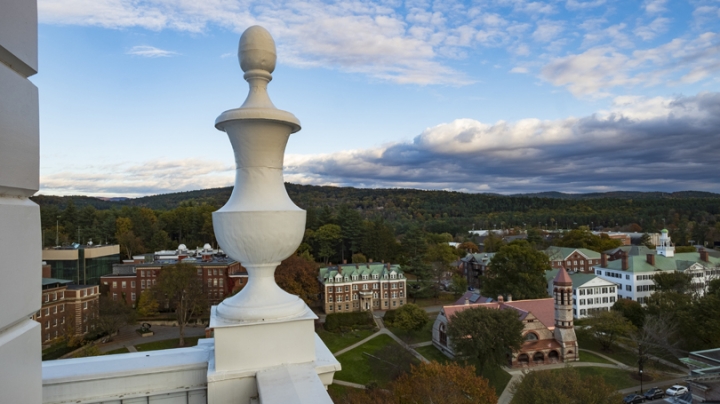 Alumni, parents, and friends committed $329.2 million in philanthropic support to Dartmouth in the fiscal year that ended June 30, driving the institution’s strategic vision to advance Dartmouth’s distinctive educational model as the fusion of a renowned liberal arts college and a robust research university.

The tally of campaign gifts and commitments in fiscal 2019 was the second highest total in the College’s history, behind only the previous year, when Dartmouth publicly launched The Call to Lead, its $3 billion comprehensive campaign. In April of this year, campaign giving passed the $2 billion mark, and then reached $2.15 billion by the close of the fiscal year.

Alumni giving in Dartmouth’s 250th year was particularly strong, with the Dartmouth College Fund experiencing an increase in participation to 41 percent of all alumni.

“Dartmouth is on the move,” said Greg Maffei ’82, a trustee and campaign co-chair. “Community support is shaping Dartmouth’s future in real time. The impact is evident by any measure—student talent, faculty recognition, campus facilities, collaboration across schools, fiscal discipline, and lives improved around the world through Dartmouth research.”

Although the campaign runs through 2022, The Call to Lead is already heightening the Dartmouth experience:

These achievements underscore alumni pride in the institution and have helped position Dartmouth as the premier combination of a liberal arts college and research university, where students learn from world-leading teacher-scholars.

The passion to give back to the Dartmouth community is lifelong. For the third consecutive year, Forbes has ranked Dartmouth first among all U.S. colleges and universities in its “Grateful Graduates Index,” which measures alumni philanthropic support.

Big Green Is a Big Tent

The forces driving the campaign’s success include initiatives that are creating new models of higher education philanthropy by inviting diverse segments of the alumni population to join in The Call to Lead.

The Centennial Circle of Dartmouth Alumnae continues to play a pioneering role in women’s philanthropy in higher education, raising $8.4 million for financial aid through the Dartmouth College Fund in fiscal 2019. With a goal of 250 members by December 2019, the Circle had 243 members as of June 30.

Young alumni responded enthusiastically to a special annual fund challenge this past spring, countering national trends related to unrestricted and millennial giving. Overall participation for the 20 youngest classes grew by 20 percent over the previous year, and the challenge added more than $1 million to the endowment, which was dedicated to financial aid.

“The opportunity to create an endowment in our class’s honor really did it,” said John Apostolides, a head agent for the Class of 2003, which achieved a 52 percent participation rate. “We realized that we could do something really special, and we almost doubled what we achieved the year before.”

The 26 members of the Dartmouth Founders Circle, a cadre of leaders in technology, social enterprise, venture capital, and private equity, have each committed $1 million to the Magnuson Center for Entrepreneurship. The center provides a distinctive mix of cocurricular programs, grant-making, mentoring, and internship experiences to support students, faculty, and alumni—from ideation through venture launch.

Innovative campaign initiatives such as these led to Dartmouth receiving seven awards this year from the Council for Advancement and Support of Education (CASE), the premier international organization dedicated to educational advancement. CASE praised the Centennial Circle as “a national example for how to engage women in the power of giving.”

The Next Big Push—and Why

The push to raise the next $1 billion is essential to ensure that every student and faculty member can excel with the full support of the Dartmouth community. Investment in faculty achievement throughout their careers is central to each school’s ambitions. Endowed student scholarships are a universal priority because of their role in advancing student access and the affordability of a Dartmouth education.

“At the core of The Call to Lead is the idea that every Dartmouth student will benefit from the full breadth of the Dartmouth experience with extraordinary faculty mentorship and the elimination of financial constraints,” said Ellie Loughlin ’89, a trustee and campaign co-chair. “What could be more motivating than to prepare tomorrow’s leaders?”

Learn more about all of these efforts and the campaign overall at calltolead.dartmouth.edu.