The Dartmouth professor’s mission is to make math fun for all ages and abilities. 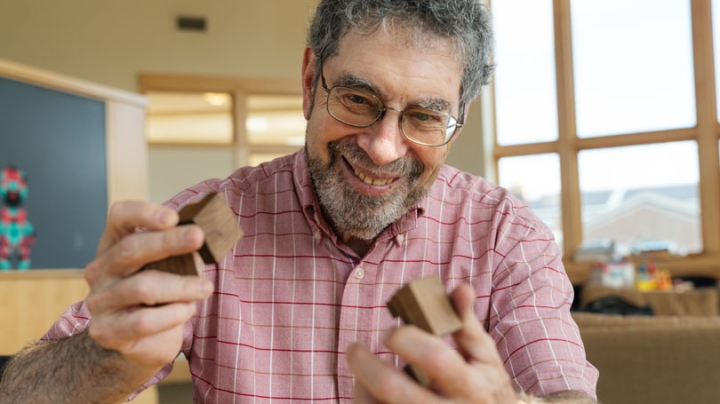 Math and computer science professor Peter Winkler, who will lead “A Year of Puzzles” at the National Museum of Mathematics in New York, assembles a wooden puzzle that proves the equation for the sum of consecutive squares. (Photo by Eli Burakian ’00)
9/04/2019
Body

But you can just call him “puzzle master.”

Winkler, who teaches combinatorics, probability, and the theory of computing at Dartmouth and holds a dozen patents in cryptography, holography, and distributed computing, left this month to begin “A Year of Puzzles” at MoMath. During his one year away from Dartmouth, he will lead a series of public initiatives, including teaching mini-courses in puzzle solving; holding special events at city high schools; and hosting a series of puzzle-themed dinners for executives on probability and decision theory.

“Serving as ambassador is what the appointment is all about. I’m building a bridge between academic mathematics and public enjoyment of math as a stimulating and fun game,” he says. “You don’t need to be a researcher or math teacher to appreciate the beauty of mathematics, any more than you need to be a composer or performer to enjoy music.”

Mechanical puzzles such as linked rings and interlocking wooden blocks are within easy reach on the desk in his Dartmouth office, and the popular mathematical puzzle books he wrote, as well as his novel Crypto-Bridge, share shelf space with his advanced math and computer theory textbooks on three walls.

“Puzzles are my outreach device. I like to use puzzles to teach, to get people excited, and to challenge them to think.”

While his duties as the MoMath puzzle master will take him to New York for a year, Winkler will continue his work with graduate student Christopher Coscia, Guarini ’20, and postdoctoral researcher Martin Tassy, a John Wesley Young Research Instructor in Mathematics.

“I might be able to rope them in for some public events for the museum,” Winkler says.

Winkler’s fascination with mathematical puzzles goes back a long way. Between earning his BA at Harvard and his PhD at Yale, Winkler served at a mathematician at the National Security Agency and then as a special duty officer in cryptology in the U.S. Naval Reserve.

Before coming to Dartmouth, he taught at Stanford University and Emory University. While at Emory, he solved a widely publicized problem that had arisen at Bell Labs, which eventually landed him a job as director of fundamental mathematics research at the renowned industrial research company.

“When Bell Labs originally thought about designing the internet, J.R. Pierce realized that the system wouldn’t work with traditional phone lines. The problem was, can we devise an address system for little ‘packets’ of data, swimming around out on the system, to find their way around any network?”

Winkler came up with a way it could be done. His solution was not the one that was eventually used in creating the World Wide Web, but “it was an entrée to Bell Labs and came with a cash prize of $250.”

Although he sometimes uses puzzles and games to illustrate ideas in his advanced mathematics classes, Winkler also loves recreational math. He is part of an online community of people who design, build, and collect mechanical puzzles, he says, pointing to a complex interlocking wooden block puzzle on his desk that one of his online puzzle-maker friends created to prove the equation for the sum of consecutive squares: 12 + 22 + 32 + . . . + n2 = n(n+1)(2n+1)/6.

Winkler sees his mission at MoMath as breaking down “math aversion” and letting more people in on the fun.

“Even people who are trained in math are often afraid of being given puzzle challenges—in a job interview, for example. I want to share strategies for solving puzzles, and maybe even show people how this outlook can be helpful in our daily lives,” Winkler says.

“I want to help people recognize where intuition can lead them astray and see how to fix it by using mathematics and problem-solving.”