CNN’s Jake Tapper ’91 interviews the filmmakers about the ups and downs of moviemaking. 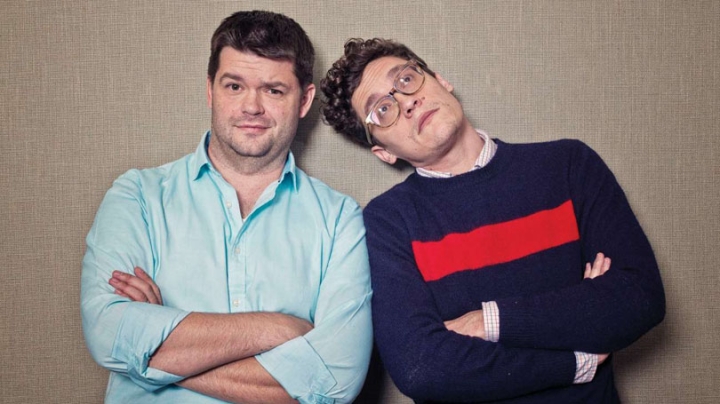 Author and chief Washington correspondent for CNN Jake Tapper ’91 interviews fellow alumni Phil Lord ’97 and Chris Miller ’97, who met at Dartmouth and whose movie credits include Cloudy With a Chance of Meatballs, 21 Jump Street, The Lego Movie, and Spider-Man: Into the Spider-Verse.

Tapper: What do you love about the TV and movie business?

Miller: It’s amazing that we get to come up with crazy ideas and make them into a reality. It always feels so magical when you think of something and then someone builds a set. We can think of something in our minds and then have it be real. I never get over that. It still makes me giddy.

Lord: I’d say it’s the collaboration with all of the crew members, artists, cast, and writers. That thing when everyone is cooperating to make art, which to me is miraculous. It’s miraculous when people get on an airplane in orderly fashion, let alone when they get together to do something as abstract and apparently as meaningless as a film or a TV show.

Tapper: Can you tell us a good behind-the-scenes story from your movie sets?

Miller: On 21 Jump Street, which was our first …

Lord: … live-action feature. Johnny Depp was going to do one day of shooting.

Lord: He gets into this whole makeup thing where he is completely unrecognizable. He has a long beard—he looks like ZZ Top. That evening we had a break for a meal, and Johnny disappeared. He came back a couple of hours later and said, “I’m sorry, I was in costume and nobody recognized me. Brie Larson thought I was an extra and asked me, ‘Like, what is this, your first time on a set?’ I realized this is my only chance to ever go down Bourbon Street, so I went in full disguise, and nobody recognized me. Sorry for the delay.”