Safety and logistics crew shuttles supplies, checks in, and keeps everyone laughing. 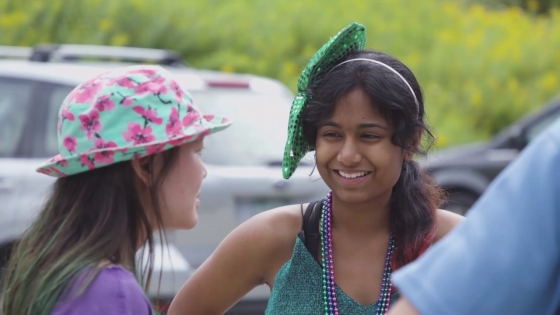 Vox Croo is a combination of the secret service and the jolly pranksters of Dartmouth’s first-year trips.

“We are the safety and logistics crew, so essentially our responsibilities include just troubleshooting all the trips,” says Daniela Armas ’20, a Vox captain. “We handle any sort of issues that happen while trippies are out on the trail, so if people run out of supplies, or if there is a problem with group dynamics or someone needs to come back to Hanover, we’re on it.”

Since 1935, the entirely student-run Dartmouth Outing Club’s trips program has helped first-year students transition to Dartmouth with an outdoor experience that introduces them to each other and to sophomores, juniors and seniors, with a positive and welcoming tone. Each trip has a theme, from cabin camping and yoga, to rock climbing and kayaking.

In addition to a full slate of scheduled trip visits, or “raids,” by Vox Croo, any trip leader can call if they need supplies or just a charge of manic energy, says Sriram Bapatla ’20, a self-described Vox “crooling.”

“We’re really the people that trip leaders will call whenever they feel like they should call somebody about anything,” Bapatla says. “In general, the trippies don’t know that we exist at all–we’re sort of the clandestine services.”

Whether the visit to a trip group is a supply run, a safety check, or a random drop in, part of the job is to make it zany, he says. “Usually you want to play around and have a concept to your raid. You want to do something kind of weird and maybe throw them off because you’ve got these trippies who are just coming to the school, so they don’t really know much about what’s going on. It definitely helps create a fun shared experience and helps create new friendships.” 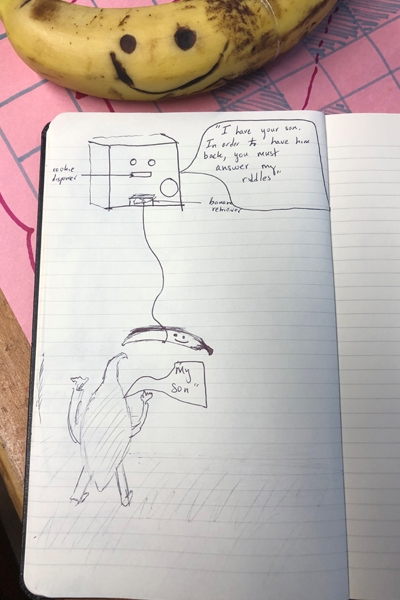 During some down time at the secluded compound base known as “The Vox Hole,” (an off-season summer camp in Orford, N.H.), Bapatla was sketching out a plan for a raid involving a banana suit, a kidnapped banana, and a cardboard-box robot that dispensed cookies and held the baby banana hostage until its riddles were answered. Nearby, Sarishka Desai ’20 was flipping through a red binder that has health forms for all trippies to make sure the brownies they baked for a different raid wouldn’t be a problem for anyone’s food allergies.

“Each raid has a theme, and we made a rule that you’re not allowed to repeat raids,” says Armas. “By the end of trips, our crew has done over a hundred, so they just kind of get progressively wackier and wackier.”

The croolings have a running competition to come up with ideas for raids, Armas says, pointing to a 15-foot table along a back wall piled high with tutus, rainbow wigs, animal costumes, and all manner of psychedelic leisurewear.

“But at the end of the day,” Bapatla says, “You trick them a little, be kind of interactive, and give them a treat.” 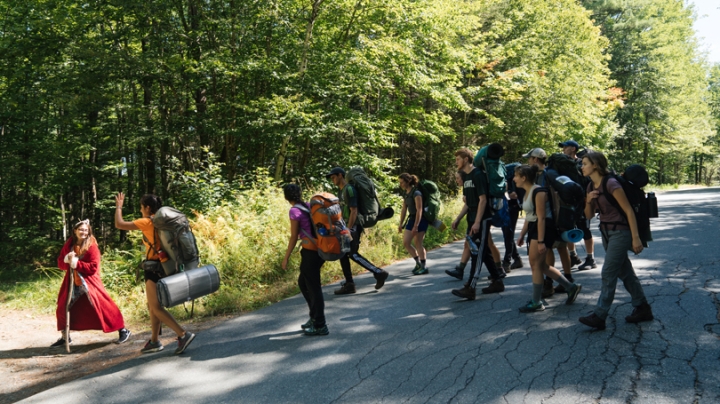 Vox Croo co-captain Daniela Armas ’20, in character as a woodland spirit, intercepts a climbing trip as they cross a road.