Conference to Celebrate a Century of Women on the Faculty

Events explore women’s leadership, from Elizabeth Hapgood, hired in 1918, to the present. 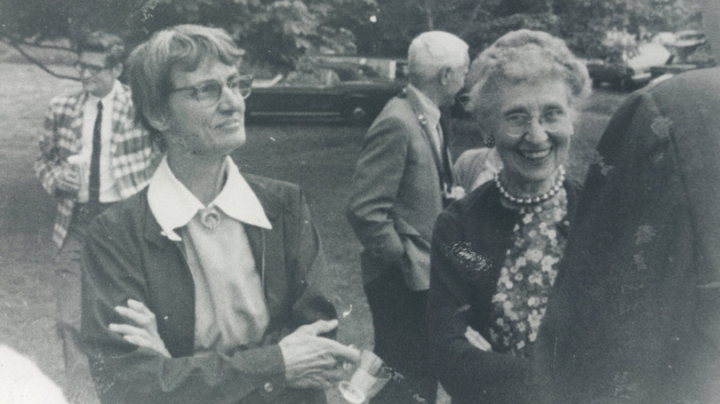 Professor of Biology Hannah Croasdale, left, and Mildred Morse, secretary and curator in the art department, at a convocation event in 1969, a year after Croasdale became Dartmouth’s first tenured female professor. (Photo courtesy of the Dartmouth College Library)
10/30/2019
Body

The 1918 correspondence of President Ernest Martin Hopkins ’01 illustrates the trepidation felt by Dartmouth leadership in making the unprecedented move of hiring a woman to fill the newly created position of Russianist.

“I would like to do the very unfair thing of utilizing Mrs. Hapgood’s knowledge and ability without formally putting ourselves on record as having established this precedent,” Hopkins wrote to Professor Louis Dow, chair of the Department of Romance Languages and Literatures, on Aug. 19, 1918.

A slide show and talk about how Hopkins and the board of trustees eventually came to hire Elizabeth Reynolds Hapgood as the first woman on the College faculty, as well as stories of other legendary female professors, such as Hannah Croasdale, Dartmouth’s first female tenured professor, who taught biology from 1935 to 1971, will kick off an all-day conference on Nov. 8 titled “Women on the Faculty: A Dartmouth Centennial.”

John Kopper, professor of Russian and comparative literature and co-organizer of the conference, says the event “celebrates the centennial of Hapgood’s history-making presence on the Dartmouth faculty, and, therewith, the roles played by women faculty in the hundred years since.”

Co-organizer Sienna Craig, an associate professor of anthropology who is affiliated faculty with Women’s, Gender, and Sexuality Studies, says, “Through this event, we hope to focus not just on the professional lives of pioneering Dartmouth women faculty but on the crucial roles they played in mentoring students.”

The conference opens at 9:30 a.m. on Friday, Nov. 8, in Occom Commons at Goldstein Hall, with welcoming remarks by Elizabeth Smith, dean of the Faculty of Arts and Sciences, followed by a series of panel discussions covering the pioneering decades, the early years of coeducation, and contemporary experiences. The event will also include an exhibit at Dartmouth Library’s Rauner Special Collections Library devoted to the career of Arctic explorer and scientist Evelyn Stefansson Nef.

The keynote addresses, from 4:30 to 6 p.m., will be presented by two former members of Dartmouth’s history department: Judith Byfield ’80, now a professor of history at Cornell, and Mary Kelley, the Ruth Bordin Professor of History at the University of Michigan. Kelley taught at Dartmouth for 25 years and delivered the keynote address in 1997 at a celebration of a quarter century of coeducation.

Support for the conference has come from the 250th Anniversary Committee, the Office of the Provost, the Department of Russian, the Leslie Center for the Humanities, and the Program in Women’s, Gender, and Sexuality Studies.