Dartmouth Hosts a Summit on the Future of the Northern Forest 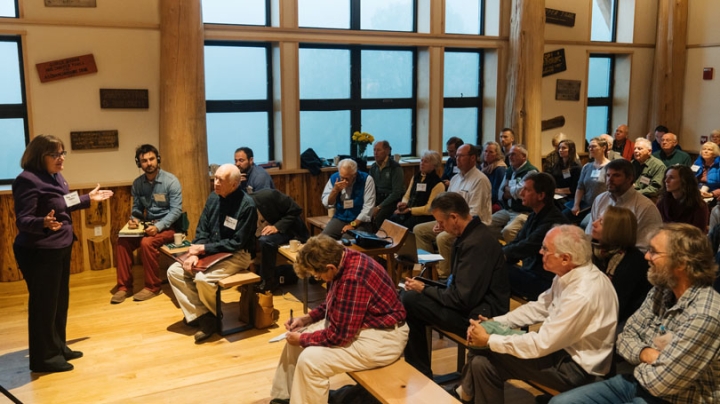 U.S. Rep. Ann McLane Kuster ’78 (D-N.H.) welcomes participants at the opening of a conference on “The Future of the Northern Forest in a Time of Change” held Monday at Dartmouth’s Moosilauke Ravine Lodge in the White Mountains. (Photo by Eli Burakian ’00)
10/09/2019
Body

Dartmouth has an important role to play in bringing about an effective response to the threat climate change poses to the Great North Woods ecosystem, said U.S. Rep. Ann McLane Kuster ’78 (D-N.H.) at a Moosilauke Ravine Lodge conference Monday on “The Future of the Northern Forest in a Time of Change.”

“Climate change is here. It’s happening, and we need to understand how to respond,” said Kuster. “Dartmouth, through a combination of research and convening discussion, can play a significant role. The interdisciplinary approach of bringing together researchers and the timberland owners, along with conservation and recreation groups, industry, and policy makers, is key, because everybody has a role to play. I think it is the communication among and between the groups that will be the most effective.”

Kuster spoke at the start of the day-long conference, organized at the College’s White Mountains lodge by Dartmouth’s Second College Grant management team and the Office of the Provost. Some 75 people attended the event, which featured Dartmouth research presentations; a panel discussion with non-academic stakeholders, including the Society for the Protection of New Hampshire Forests, the Northern Forest Center, Lyme Timber, the College Woodlands Office and the Dartmouth Sustainability Office; and research-poster presentations by Dartmouth undergraduates and graduate students.

David Lutz, a research assistant professor, spoke about his research on the Second College Grant, a tract of 27,000 acres of New Hampshire forest that Dartmouth has owned and managed for more than a century. He summarized decades of data gathered in the grant that show declining snowpack, rising average temperatures, and shifting seasonal rainfall patterns, illustrating the local effect of climate change. And he appealed to the participants to consider how research could be helpful to their work as they try to adapt to these rapid changes.

“All of our institutions, be they federal, state, local, regional, or NGOs, have a lot of knowledge, and we can gain by working together. Dartmouth is committed to serving as a central point where this kind of work can happen,” Lutz said.

“My question to you all is to think about how you would like to be involved. What perspectives or resources can you bring? One of my goals here today is to create a list of people who want to go forward with projects together—getting people connected.”

Lutz hopes the Moosilauke conference can be the start of an ongoing conversation. The event organizers are already discussing next steps and future gatherings, he said.