The neuroscientist nurtured and inspired generations of scholars. 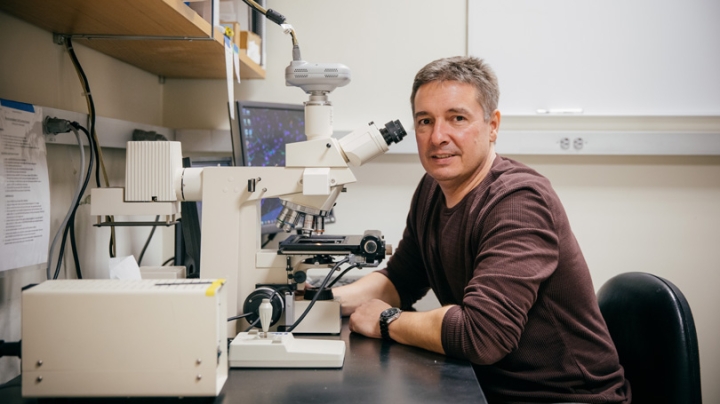 David Bucci was the Lincoln Filene Professor of Human Relations in the Department of Psychological and Brain Sciences. (Photo by Robert Gill)
10/23/2019
Body

The Dartmouth community is mourning the loss of Professor David Bucci, a generous and supportive colleague, a neuroscientist who nurtured and inspired generations of scholars, and a devoted family man, who died on Oct. 15.

In an email to the Faculty of Arts and Sciences, Dean Elizabeth Smith called Bucci a remarkable colleague and scholar. He was also, she wrote, a dear friend to many.

“Our future will be less bright without Dave to lead students to make transformational discoveries. In addition to his family, Dave leaves an international cohort of students and colleagues in neuroscience and neurobiology. And he leaves those of us here on the Hanover Plain, who mourn the passing of this brilliant, compassionate man, this dear friend.”

“We will remember Dave as a kind and generous scholar, teacher, colleague, and community member,” President Philip J. Hanlon ’77 and Smith wrote in an email informing the community of Bucci’s passing.

Bucci, who had been at Dartmouth since 2004, was the Lincoln Filene Professor of Human Relations. He had served as chair of the Department of Psychological and Brain Sciences (PBS), and as a faculty member in the graduate Program in Experimental and Molecular Medicine, the Center for Cognitive Neuroscience, and the Center for Technology and Behavioral Health at the Geisel School of Medicine. Beyond Dartmouth, he was an elected fellow of the Association for Psychological Science and the American Psychological Association and received numerous institutional and national awards for his research, teaching, and mentoring.

He is survived by his wife, Katie, and their three children, Joshua, Ava, and Lila. Survivors also include his parents, John and Barbara Bucci; a brother, Christopher Bucci; and a sister, Cheryl Bucci.

Calling hours for Bucci are from 2 to 4 p.m. and 6 to 8 p.m. on Thursday at Knight Funeral Home in White River Junction. A Mass of Christian Burial will be celebrated at 11 a.m. on Friday at Saint Denis Catholic Church in Hanover. A reception and lunch in Alumni Hall will follow the mass and be a time for members of the Dartmouth community to share their memories of Bucci.

In lieu of flowers, contributions may be made to a college fund that has been set up for the Bucci children. In addition, there is a GoFundMe site that can be found on a memorial website created by a friend and colleague of Bucci.

Bucci is remembered by friends as a proud and involved father and an enthusiastic community volunteer.

He was an expert on learning and memory, wrote Smith. “His research is widely regarded by his peers as pushing the frontiers of knowledge. One colleague predicted that, as time passes, we will find ever-increasing citations of Dave’s work.”

“Dave was a student and then a researcher, teacher, and mentor to hundreds of postdoctoral fellows, graduate students, and undergraduates. In the classroom, in his Bucci Laboratory, and as an informal mentor, Dave’s students benefitted from his passion for research and learning and from his empathetic and compassionate manner,” she wrote.

“Many students say that Dave challenged them and inspired them to ask questions, to make discoveries, and to acquire new knowledge,” wrote Smith. “Dave’s peers believe that his influence will be felt by generations of scholars and practitioners in neuroscience and in mental health.”

Bucci’s research sought to understand the basic mechanisms of information processing in the brain in order to relate these findings to cognitive dysfunction in humans. His research was continually funded for more than 20 years and he received $11.5 million in funding during his lifetime of work, and drew interest from a variety of fields in science and medicine. At the time of his death, he was working on research supported by the National Science Foundation and the National Institute of Mental Health.

With more than 90 publications and 80 invited presentations and lectures during his time at Dartmouth, Bucci’s work has changed and informed the fields of neuroscience and neurobiology, Smith wrote. “It has been the focus of high-profile media coverage on topics such as risky teenage behavior and brain chemistry; the relationship between memory and place; exercise during pregnancy for boosting children’s brains; and the genetic reasons exercise makes you smarter. His work will continue to advance scientific inquiry and the practice of mental health.”

In an interview with Dartmouth News in 2016, when he was appointed to the Lazarus professorship, Bucci talked about the joy of seeing his students learn. “Perhaps my favorite aspect of working with students is exposing them to new ways of thinking, seeing them become passionate about a topic, and providing them with the experience of discovering new knowledge themselves,” he said.