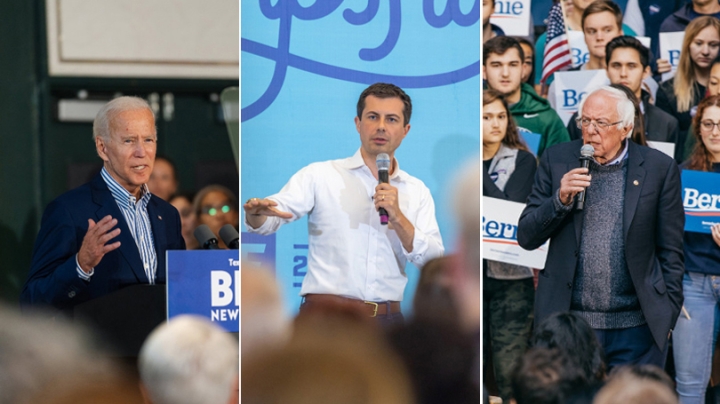 Dartmouth has been a frequent backdrop for the presidential primary in recent months as national attention turns to New Hampshire’s first-in-the-nation-primary for insight into the developing race for the Democratic nomination.

On Sunday, Sen. Bernie Sanders (I-Vt.) campaigned at the Bema, speaking to a crowd of more than 1,000 students and community members. His speech proved hard to resist for the national media, with images of Sanders rallying the crowd among the Dartmouth pines turning up on network news broadcasts, in The Washington Post, and on the Politico website, along with reports of Sanders’ recent fundraising numbers.

One of the students attending the Sanders event was Berit DeGrandpre ’20, who, as a first-year student during the 2016 election, voted by absentee ballot in her native Montana. But after seeing the level of political engagement among New Hampshire voters, she decided she wanted to exercise her right to vote in her new home. She says she is very excited to cast her ballot in the February primary.

“It’s a great opportunity to be in such an important state in this election. Talking to Dartmouth students and people my age, our generation is starting to understand that this is a critical election. Having a say and exercising our right to vote as citizens are really important,” DeGrandpre says.

“Hopefully, New Hampshire will be a great state for a lot of students, a lot of young people, and a lot of voters in general to come out and take part in the democratic process and set that precedent for the rest of the country,” she says. 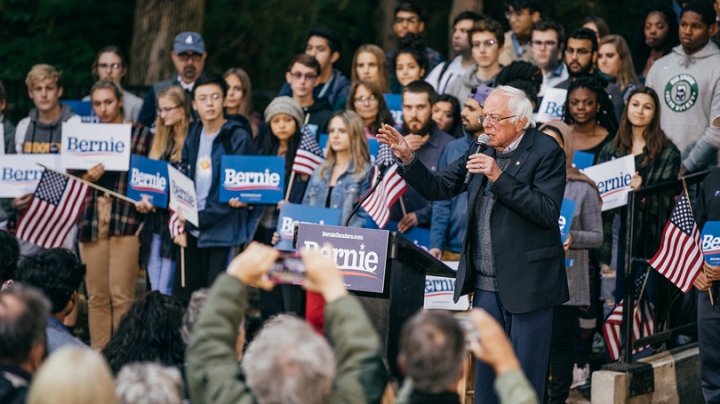 Images of Sen. Bernie Sanders (I-Vt.) speaking to Dartmouth students during a campaign rally among the pines at the Bema were picked up by television stations and newspapers across the country this week. (Photo by Robert Gill)

One day after Sanders’ visit, Chasten Buttigieg, the husband of candidate and South Bend Mayor Pete Buttigieg, was at the Hopkins Center meeting with some 50 students and campaign supporters in the faculty lounge. It was the second visit from the Buttigieg campaign in as many months. Mayor Pete himself, as his supporters call him, had visited Dartmouth just over a month before. At the Aug. 24 event, the Hanover Inn ballroom was filled to capacity with some 350 students and community members, with several hundred more in an overflow area outside. 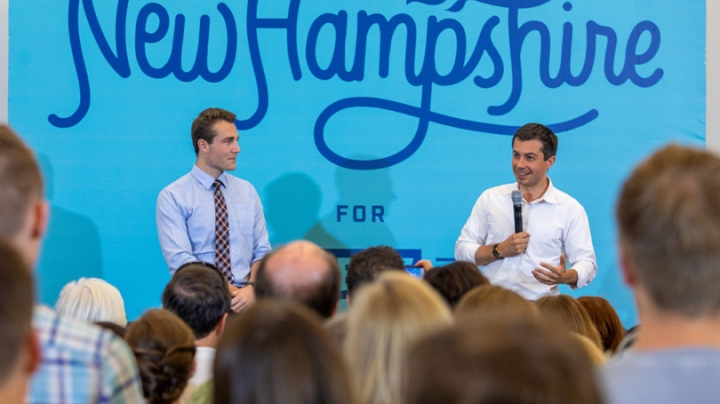 The day before, on Aug. 23, former vice president Joe Biden (D-Del.) held a town hall discussion in Alumni Hall focused on health care. Biden’s status at the time as front runner in the Democratic race attracted dozens of reporters and television cameras from local and national media, and remarks during the candidate’s wide-ranging question-and-answer period, lasting more than an hour, continued to turn up in accounts of the Dartmouth visit for more than a week during the relatively slow August news cycle.

At the Biden event, Arjun Bhatt ’20 talked about plans to see as many candidates as possible in the run-up to the New Hampshire primary. 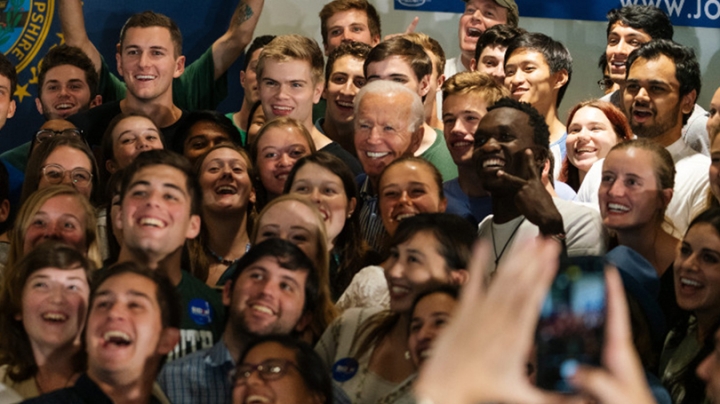 Bhatt says Dartmouth’s strategic location in an early primary state “helps students get early access to what it’s like being a politician and gives them an up-close view of how community organizing and political activism works. I think it motivates students here to care—having the candidates come to them.”

Students have many opportunities to get involved with the process in New Hampshire, “where they can canvass, or phone bank, or work for a national presidential candidate that they support and who they have more than likely met,” Bhatt said.

With President Donald Trump seeking a second term, there are fewer events on campus for Republican candidates, unlike in 2016, when 10 out of 16 GOP presidential hopefuls visited campus. Some campus Republicans did travel to Manchester on Aug. 15 to attend a Trump rally, and 2020 GOP candidate former Massachusetts Gov. Bill Weld will visit campus on Oct. 10.

Weld’s visit, at the invitation of the Dartmouth College Republicans, is billed as a policy talk, not a campaign event. Weld will speak from 4:15 to 5:15 p.m. in Filene Auditorium. The discussion and question-and-answer period are free and open to the public.

Alexander Rauda ’21, acting vice-chair of the Dartmouth College Republicans, says that while the membership has agreed to support Trump for reelection, the group invited Weld to campus in the interest of a free and open dialogue.

“We are confident in President Trump’s re-election in 2020,” Rauda says. “We are so confident, that we seek to provide an open forum for any candidate to present the best case as to why the Republican Party should not re-nominate President Trump. We will likely not agree with Mr. Weld’s case—regardless, we remain committed to freedom of speech.”