“It’s honestly the most fun group I am part of at Dartmouth,” says Hilda Friday ’20. 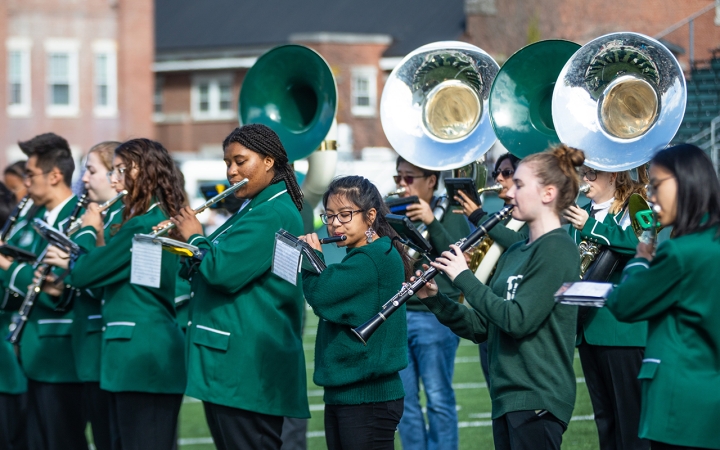 Now that football season is in full swing, so is the Dartmouth College Marching Band, which celebrates its 130th year this fall.

The small, enthusiastic ensemble peps up every home football game by parading through Hanover to the gridiron, where they put on a humorous half-time show. If the Big Green wins, they march through the Dartmouth Library’s Baker-Berry Library playing school fight songs. And they travel to one away game each season. 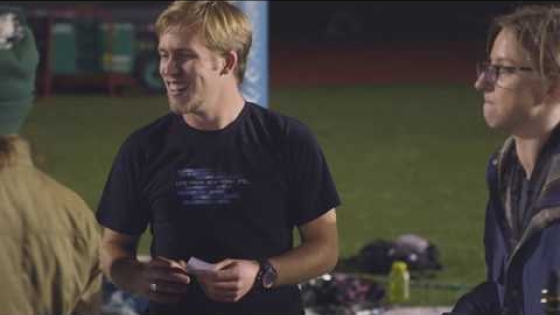 Sometimes they don silly costumes. For example, at their final show, seniors traditionally run the length of the field wearing their tailored uniform jackets over boxer shorts.  Even Dartmouth’s now famous “MVP” robotic tackling dummies got their bling on for a cameo role as dancers in a 2016 show.

Started in 1889, the Dartmouth College Marching Band (DCMB) is the oldest in the Ivy League. But the name is a bit of a misnomer, because they don’t exactly march in formation.

Fairly common in the Ivy League, “scatter bands” aren’t big enough to pull off complicated geometry on the field. Instead of marching like soldiers, they scramble in all directions until they land on enough spots to create a shape. Formations can range from the go-to “D” to, say, a toothbrush, if Colgate happens to be the visiting team.

Whatever their geometry, the band performs in all kinds of weather—which can be unkind to woodwind instruments. As the sun set on a cold, raw Friday evening a week before homecoming, they practiced moving onto the field.

“It’s honestly the most fun group I am part of at Dartmouth,” said drum major and alto saxophonist Hilda Friday ’20. She belonged to her high school marching band in Hilo, Hawaii, and joined the DCMB four years ago.

“It’s also one of my main social groups. We enjoy music, eat dinner together, hang out and watch movies, play board games, and trade jokes.”

Some of those jokes find their way into zany scripts co-written by the band’s two show chairs, Jack Burgess ’20 and Peyton Bullock ’22. Burgess, from Tucson, Ariz., plays trumpet in the band, and his twin sister, Isabelle, plays saxophone. It’s a family tradition; their mother, Kathryn Burgess ’83, was also a DCMB member.

The writers poke good-natured fun not only at opponents, but at Dartmouth as well. For the homecoming game against Yale—a 42-10 win, giving Coach Buddy Teevens his 100th victory—the band was joined, as always, by alumni musicians. They gave a tongue-in-cheek introduction and welcome to the opposing team:

“And now, the only band in the Ivy League to warm your heart and your fingers,

The Dartmouth College Mitten Band!” the announcer said on the public address system.

“Hey Yale. In the spirit of homecoming, we remember old-timey Dartmouth-Yale marching band memories! We used to be the best of friends. Why don’t you call anymore? You never host us or stay over.”

Then they played “Call Me Maybe,” and scattered into the shape of a boat.

While the DCMB is a student-led activity, it has a professional conductor, who also directs Dartmouth’s wind ensemble. Brian Messier led musical ensembles at Williams College before coming to Dartmouth this year, and he’s already loving his work with the DCMB, he says.

“It acts as the heart of the student body,” says Messier. “It’s very clear that they’re having fun doing what they’re doing, for its own sake. Football is important, yes—and so is the music.”

Next month, the band hits the road—for Yankee Stadium, site of the Nov. 9 face-off between Dartmouth and Princeton, part of the College’s 250th celebration.

Meanwhile, the door of Hartman Rehearsal Hall, in the Hopkins Center for the Arts, is open to new members. No auditions are required, and if necessary, instruments are provided. 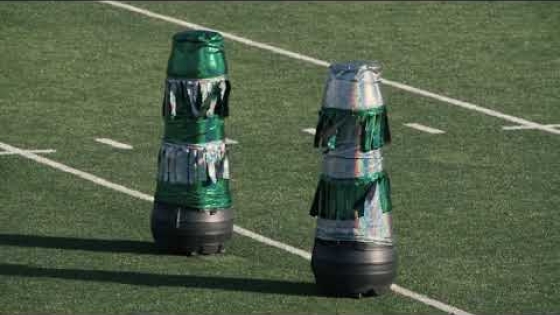