Two novelists and Thomas Mann’s grandson are among this year’s fellows. 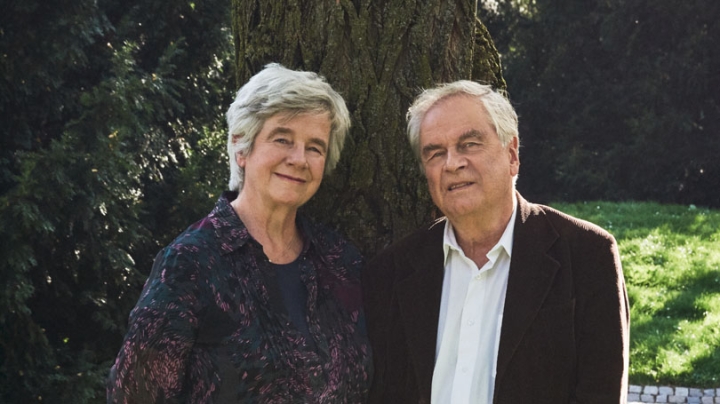 In its 42nd season, the Montgomery Fellows program will be bringing writers and public intellectuals to campus to give public talks, participate in workshops and discussions, and meet with faculty and students in and outside of the classroom.

Look for Montgomery to be more visible on campus, says the program’s director, Steve Swayne, the Jacob H. Strauss 1922 Professor of Music. “Our hope is for Montgomery to be increasingly nimble in bringing to campus a diverse and intellectually and creatively eclectic range of fellows,” Swayne says. “And I would like for us to find ways to be more responsive to student interests.”

First up this fall are authors and public intellectuals Frido Mann and Christine Heisenberg Mann, who will be in residence Oct. 15-25.

Frido Mann, a clinical psychologist and former executive director of the Institute for Medical Psychology at the University of Münster, is the grandson of the Nobel-Prize-winning 20th-century German novelist Thomas Mann. Christine Mann, also a writer, is the daughter of theoretical physicist Werner Heisenberg, who won the Nobel Prize in 1932 for his groundbreaking work on quantum mechanics.

During their residency, the Manns will participate in a public discussion with Associate Professor of Physics and Astronomy Chandrasekhar Ramanathan on “Ethical Phsyics” at 4:30 p.m. Wednesday, Oct. 16, in Silsby 028, and a lunchtime conversation with undergraduates on “What, If Anything, Do We Owe Our Blood Relatives?” at noon in the Blunt Alumni Center, Suite 204. Frido Mann will also deliver a talk, titled “Democracy Will Win,” at 4:30 on Oct. 24 in Rockefeller Center, Room 003, sponsored by the Department of German Studies.

They will also be participating in an Oct. 24-25 workshop on Thomas Mann’s legacy, titled “Mann Family Lives and Fictions,” organized by Associate Professor of German Studies Veronica Fuechtner, who is working on a book exploring the life of Thomas Mann’s Brazilian-born mother, Júlia da Silva Bruhns Mann.

In the winter term, in a residency timed to coincide with the New Hampshire presidential primary, award-winning British novelist and essayist Zia Haider Rahman will be on campus Feb 9-22. Rahman won the 2015 James Tait Black Memorial Prize for his novel In the Light of What We Know. The Bangladeshi-born writer is an astute observer of UK politics and culture whose writings on Brexit, published in The New York Review of Books, have sparked conversation on both sides of the Atlantic.

In the spring, award-winning Lebanese author Hoda Barakat returns to campus for a residency, May 11-13. Barakat, who was a visiting professor of Middle Eastern studies last year, is the author of six novels, including The Night Mail, which won the 2019 International Prize for Arabic Fiction, as well as two plays, a book of short stories, and a memoir. Her work has been published more than 14 languages.

In the summer, fiction writer Phil Klay ’05 will be on campus as a Montgomery Fellow for two weeks in July. Klay’s debut collection of short stories, Redeployment, won the 2015 National Book Award.

Looking forward to the 2020-2021 academic year and beyond, Montgomery hopes to welcome to campus British novelist and essayist Pico Iyer, novelist Louise Erdrich ’76, neuropsychiatrist and behavioral neuroscientist David Silbersweig, and others.