Who collects and owns digital data about you? Can you and should you take more control of it?

Those are the questions Jacqueline Wernimont, the Distinguished Chair of the Digital Humanities and Social Engagement (DHSE) academic cluster, asked in “Corporeal Imaginations,” an exhibit on display last month outside Dartmouth Library’s Jones Media Center.

Wernimont is also an associate professor in the Women’s, Gender, and Sexuality Program. The exhibit, which featured eight interactive stations, was a project of the Digital Justice Lab she has created with two graduate and six undergraduate students.

There was, literally, food for thought. Visitors could take selfies, print them out on vegetable-based paper, and eat them—a metaphorical reminder that our personal information can be consumed.

At a table, groups of people could slip their fingers into oximeters—small plastic sleeves normally used to measure pulse rates. Strung electronically together, the devices made a chorus of beeping sounds. By adding their fingers to the sleeves or removing them, participants could shape, collectively, the eerie music.

On a nearby wall hung a piece called “Anatomies for Quantified Life.” Pinned to a board, like insects, were tiny components extracted from fitness trackers, from monitors designed to keep track of babies and children, and from a “happy fork” (a weight loss aid that tracks food intake and vibrates to slow down eating).

“We’ve dissected several popular quantifying devices because we wanted to give an inside view of black-box technologies, which consumers buy and use, but are not meant to see ‘under the hood,’” said Wernimont. She said she hoped the exhibit would serve as a reminder that many of our digital devices know more about us than we know about them, and that the social impacts of technology are not always equitable.

Wernimont said the conveniences and the costs of digital culture are borne disproportionately, depending on race, gender, sexual preference, and other factors.

“For example, in my research, I’ve worked to address violence against women and gender minorities, and received and honored requests from transgendered people not to post information about community security practices. It’s not safe, right? The visibility around best practices to address harassment is not a benefit to them. It’s a risk. But for other people who are relatively more secure, and less likely to be targeted, they get a lot of benefit from internet published resources. So it’s uneven,” said Wernimont.

The Digital Justice Lab is not anti-technology. “What we are trying to do is offer a counterbalance to widespread notions of a techno-Utopian space,” Wernimont said. “I don’t want people to be afraid of their devices, but I do want them to be informed.”

During the week that “Corporeal Imaginations” was on display, Wernimont guided visitors through the hands-on exhibits. When Sana Nadkarni ’22 wandered in, she made a beeline for the “Anatomies for Quantified Life.”

Nadkarni said that unlike many of her peers, she tries to experience life directly, unfiltered by technology. “I actually left my Apple watch at home when I packed for college, and told my mother if she wanted to use it she should be aware that it’s tracking her health data,” she said.

Wernimont and Nadkarni paused for several minutes in front of a crocheted net about the size of a laundry bag, hanging from the ceiling. Inside the net, a clear silicone substance called liquid glass dripped, every few seconds, to the ground, simulating an oversized teardrop.

Wernimont designed the exhibit with Christiana Rose, Guarini ’20, a graduate student in the digital musics program. “We were thinking about what it would mean to represent the length of a teardrop as it travels,” Wernimont said. “A tear drop is the kind of thing on the body where quantification might not work. Or perhaps work in a number of ways.”

Rose says the lab and a class she took from Wernimont have made her think more deeply about how, as a multi-media artist, she uses technology.

“There are some really smart people here at Dartmouth, in engineering and the sciences, doing interesting things,” says Rose. “And there’s so much push to just make and create and innovate. But there also needs to be critical engagement. The Digital Justice Lab is really asking those questions, and it’s also thinking about gender and race and a lot of other issues that are involved in the collection and use of data.” 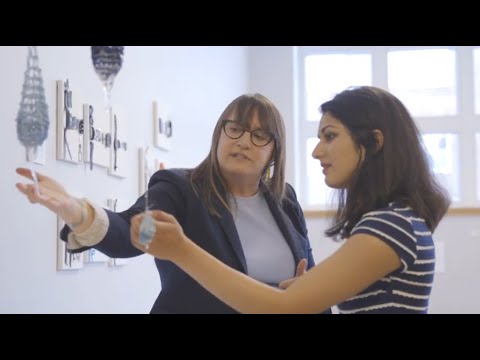