Community members participated in workshops on mentoring and gender harassment. 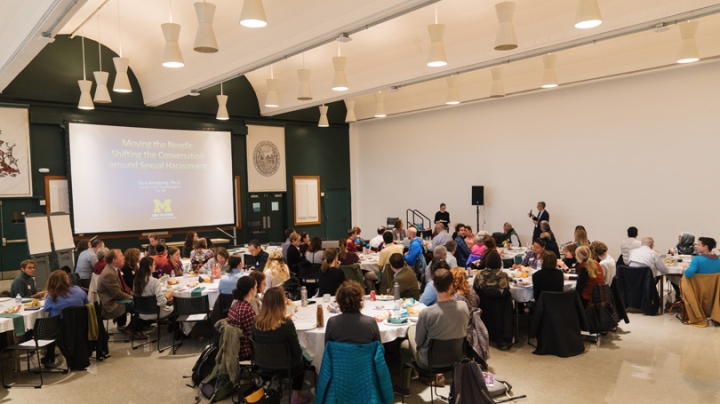 A department chair makes a point of checking in with a new faculty member to see how she’s settling in—but doesn’t leave enough time to listen to her response. Another chair, during a third-year review, downplays a junior colleague’s concerns about biased student evaluations. Elsewhere on campus, a staff member who is being harassed about her sexual orientation feels that her only recourse is to find a different job.

These were some of the scenarios members of the Dartmouth community grappled with last week during two workshops led by a group of actor-facilitators from the University of Michigan’s Center for Research on Learning and Teaching (CRLT). The nationally recognized CRLT Players use research-informed theater performance—what they call “embodied case studies” of situations that might occur on any campus—to facilitate conversations about challenging topics related to the social and power dynamics common in higher education settings.

The sessions were sponsored by Office of the President and the Dartmouth Center for the Advancement of Learning (DCAL) in support of the Campus Climate and Culture Initiative (C3I), which addresses issues of sexual misconduct and other abuses of power in the Dartmouth community.

“I thought these workshops would be good, but they were transformational,” said Theodosia Cook, the director of C3I. “They’ve brought to life the stories—the true narratives—that people are experiencing on our campus and on other college campuses. This gives us an even stronger foundation upon which to continue the necessary work of C3I.”

The first workshop, “The Chair’s Role in Faculty Mentoring,” presented situations chairs might encounter in supporting colleagues at all stages of their academic careers. The second, titled “Moving the Needle: Shifting the Conversation Around Sexual Harassment,” focused on the impact of gender and sexual harassment on individuals and communities in an academic setting.

Participants included President Philip J. Hanlon ’77 and other members of Dartmouth’s senior leadership as well as faculty chairs, and, in the second session, faculty, staff, postdoctoral fellows, and graduate students. CRLT Director Sara Armstrong challenged participants to look beyond the specific interpersonal dynamics illustrated in the skits and think about the organizational systems that permit them—and to consider how those systems might change for the better.

“If you attend to the people who have negative climate experiences, you improve the climate for everyone,” Armstrong said.

For example, in the mentorship workshop, participants considered whether departments should make more opportunities for assistant professors to receive meaningful feedback before the third-year review. Could the mentorship systems departments have in place for junior faculty continue post-tenure? Could committee work and other faculty service responsibilities—which fall disproportionately to women and minoritized faculty—be made more efficient and less time-consuming?

Of the mentorship session, Scott Pauls, the director of DCAL and chair of the math department, said, “I found the session impressively useful in thinking about how my own department deals with different kinds of issues and puts structures in place. These kinds of experiential case studies are enough removed from a specific instance at Dartmouth that people can interact with them well. It’s really powerful.”

In the session on gender and sexual harassment, Armstrong presented data, including from the 2018 National Academies of Sciences, Engineering, and Medicine (NASEM) report on sexual harassment, whose recommendations are the foundation of Dartmouth’s C3I initiative. Among the more sobering findings: Instances of harassment in higher education settings have hardly changed since the mid-1990s.

“Historically the focus has been on reporting,” Armstrong said. “Has that worked? No.” Reporting structures are important, she said, but insufficient, since the burden—and risk—of coming forward falls on the targets of harassment. Instead, she encouraged the group to think collectively about how to create an organizational culture resistant to harassment.

Of the workshop, Erin DeSilva, assistant director for learning, design, and technology in the Office of Information, Technology, and Consulting, said, “I appreciate the way that theater sets up a conversation, and gave me a chance to both listen and learn, but also talk and hear the thoughts of my colleagues. I was glad to see people make connections from the performances to their own personal experiences and the culture at Dartmouth.”

Elli Goudzwaard, the associate director of faculty programs and services at DCAL, said she found it helpful that President Hanlon and other College leaders participated in these workshops. “There’s value in the opportunity to keep these conversations going with all members of our community—but particularly the folks who have the power to set policies and enact cultural change,” she said.

Cook agreed. “It was instrumental to have our leaders in the room to hear and be a part of the discussion with people from across the institution. These conversations are important because it’s time for us to be a community. It’s time for us to gather around and hear each other—to not only do the personal work, but make the institutional shifts that are needed so that people can thrive at this institution.”

C3I is one of three initiatives the College has launched in recent years to improve campus climate, along with Moving Dartmouth Forward, an effort to decrease high-risk behavior, and Inclusive Excellence, which is strengthening the College’s work to increase diversity, equity, and inclusivity.