The Big Green won a miraculous 9-6 victory on Saturday afternoon at Harvard Stadium.

For 59 minutes, it appeared that Dartmouth would suffer its first loss of the 2019 season as the Big Green trailed host Harvard by three with one minute on the clock, no timeouts and the ball at their own 4-yard line. Yet somehow, quarterback Derek Kyler ’21 guided Dartmouth the 96 yards, ending on a 43-yard Hail Mary to Masaki Aerts ’21 in the end zone as time expired to lift the Big Green (7-0, 4-0 Ivy) to a miraculous 9-6 victory on Saturday afternoon at Harvard Stadium.

Harvard looked as if it had sewn the game up when Kyler fumbled the ball on a sack at the Dartmouth 9 with 1:19 to play. The Crimson ran three plays and forced the Big Green to use up their final two timeouts while the defense forced the Harvard runner out of bounds on the second-down play to stop the clock. Instead of taking the field goal facing 4th-and-goal at the 2-yard line, Harvard elected to go for it. But David Chalmers and Ross Andreasik ’20 teamed up to knock Devin Darrington back two yards and turn the ball over on downs.

Kyler returned to the field unfazed by the daunting task ahead and began by taking what the Harvard defense would give him — passes over the middle. The first went for eight yards to Hunter Hagdorn ’20, then he ran for a first down before completing a 19-yard throw to Hagdorn again. Then it was Drew Estrada’s turn on a 22-yard haul, his 11th catch of the game, putting the Big Green on the Harvard 43 with eight seconds left.

Kyler hurried the offense to the line and spiked the ball with six seconds left, and Harvard called a timeout to set its defense. The Crimson applied pressure, but Kyler was able to elude four pass rushers to give his receivers time to get down field. Kyler said his throw was “not the prettiest thing, but it probably helped to get it tipped up in the air.”

Two defenders leaped to meet the wobbling ball but could only bat it up, and it landed right in Aerts’s arms as he went to the turf to ensure he hung on to it for just his 12th career catch and first career touchdown, setting off a jubilant celebration from the Dartmouth team and thousands of Big Green fans on hand among the 20,112 in attendance.

After Dartmouth’s winning touchdown, Buddy Teevens ’79, the Robert L. Blackman Head Football Coach, said, “It took forever to come down. Then it’s, ‘Did that really happen or am I dreaming?’ To see the joy in the eyes of the players and in the stands … I’ve never been involved with a game like that where you win on a final, desperation pass. We’ve thrown a bunch up but never caught one.” 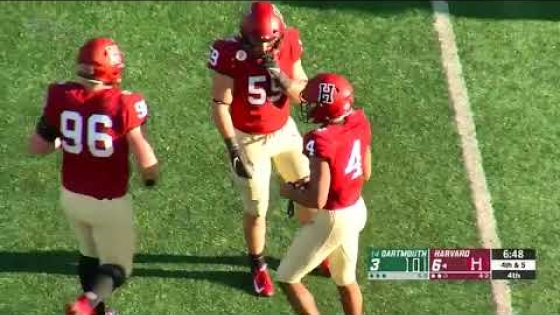