The judges call “The Indian World of George Washington” “a once-in-a-generation study.”

Professor Colin Calloway has received the George Washington Prize, which recognizes the year’s best new works on the nation’s founding era, for his book The Indian World of George Washington. (Photo by Robert Gill)
11/04/2019
Body

One of the nation’s largest literary prizes, including an award of $50,000, the George Washington Prize honors its namesake by recognizing the year’s best new books on the nation’s founding era, especially those that engage a broad public audience.

The judges for the award applauded the complexity in Calloway’s portrait of Washington’s relationship with Native American leaders and the key role the first Americans played in the establishment of the United States.

“The book paints a new and, at times, disturbing portrait of the nation’s first president—as an untested militia officer on the banks of the Ohio, as a diplomat who gradually learned to work with Indians on their own terms and, during his final years, as a disappointed Indian land speculator,” the judges wrote. “America’s first inhabitants, the book shows, were as central to the founding of the American republic as the nation’s first president.”

Accepting the prize at a ceremony at New York City’s Union League Club on Oct. 24, Calloway underscored the importance of understanding American history “warts and all,” because “great nations need great histories—they have to try to embrace everybody, but also confront the underside as well as the things that make us feel good.”

Established in 2005 by the Gilder Lehrman Institute of American History, the organization George Washington’s Mount Vernon, and Washington College, the George Washington Prize has honored many leading writers on the Revolutionary era, including Lin-Manuel Miranda, creator of the Broadway hit musical Hamilton, and former Dartmouth trustee Annette Gordon-Reed ’81, for The Hemingses of Monticello: An American Family.

“Colin Calloway is one of the best historians of the era,” said Doug Bradburn, president of the organization George Washington’s Mount Vernon and a scholar and writer on early American history. “His monumental analysis of the Indian impact on George Washington’s life helps us understand a half century of powerful Native American history more clearly. This is a once-in-a-generation study.”

Calloway has said that one of his goals in writing the book was to use Washington to draw in people who wouldn’t normally read about Native American history. The acclaim the book has attracted, including being selected as one of five National Book Awards finalists for nonfiction in 2018, suggests to Calloway that the story of Native Americans’ fundamental place in the founding of this country has struck a chord.

“I think one of the reasons why the book’s gotten the attention that it has, apart from it being about George Washington, is it’s one of those books that links two things together that don’t normally go together. It prompts us to look again at something we thought we knew. Hopefully that has a significance,” Calloway said.

“But this is not revisionist history. The point I’m making in the book is George Washington understood this link. He knew that Indians mattered. He knew that even in its first decade the United States couldn’t ignore Indians.” 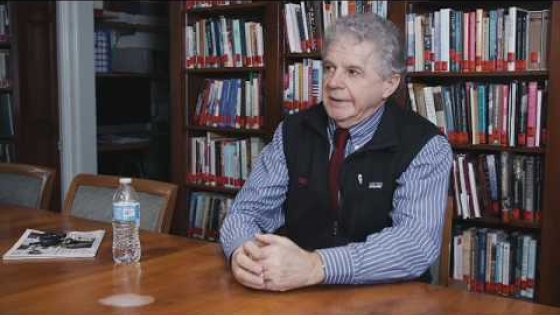