The Nobel laureate spoke at Dartmouth, where he learned to “think like a molecule.” 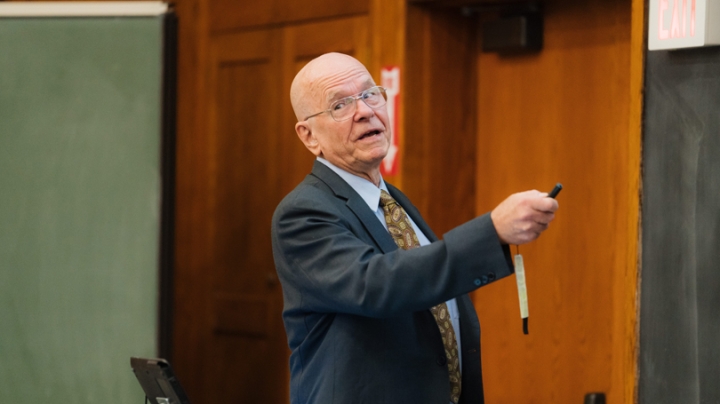 “I learned from Dartmouth to be honest about everything,” says K. Barry Sharpless ’63, winner of the Nobel Prize for Chemistry, who recently came back to Dartmouth to talk about his work. (Eli Burakian ’00)
11/24/2019
Body

It was evidently the right career track. In 2001, with William Knowles and Ryoji Noyori, Sharpless won the Nobel Prize in Chemistry for discovering chirally catalyzed oxidation reactions.

“Many molecules appear in two forms that mirror each other—just as our hands mirror each other. Such molecules are called ’chiral,’” the Nobel Prize website explains. “Pharmaceutical products often consist of chiral molecules, and the difference between the two forms can be a matter of life and death—as was the case, for example, in the thalidomide disaster in the 1960s. That is why it is vital to be able to produce the two chiral forms separately.”

After graduating from Dartmouth, Sharpless earned a PhD in chemistry from Stanford, taught at MIT for 20 years, and is now the W.M. Keck Professor of Chemistry at the Scripps Research Institute in La Jolla, Calif. At Scripps, he and his team are working on what he calls “click chemistry”: high-yielding reactions that are relatively simple to perform and whose by-products can be removed. It’s a powerful tool for pharmaceutical discoveries.

As a guest speaker for the College’s yearlong 250th anniversary celebration,  Sharpless recently came back to Dartmouth to talk about his work. He gave the lecture in his beloved chemistry classroom, but this time, the tables were turned. His former teacher, mentor, and friend, Thomas Spencer, the New Hampshire Professor of Chemistry Emeritus, sat in the front row.

You said you learned many years ago from Professor Spencer to “think like a molecule.” Could you explain?

I know I have no right to say I think like a molecule, because they’re so small, they’re out of whack, and they’re just in a different dimension. But I’m smart enough to know that I’m playing this game and it makes me different from other people. It gives me power over nature, knowing what’s going to happen. You tell me what’s going into the pot and I’ll give you my best shot at three main things that’ll happen to the thing. I don’t need a lot of fancy equipment. “Click chemistry” actually doesn’t need much, either. It’s so guaranteed that you know what the product’s going to be. With that, we can make things that are functional.

What would be the highest, best function that might come from the click chemistry that you’ve been pioneering?

Right now we’re working on resistance to tuberculosis, with support from the Gates Foundation and Calibr, a research institute at Scripps. Tuberculosis is a horrible disease. It gets into your lungs and it’s hard to kill it. And it has thick, artificial membranes that no other organism has. So we found an inhibitor, and it stops one of the key proteins that makes this weird stuff that is the membrane.

You’ve also said that it’s impossible to “design discovery.” What do you mean by that?

It’s hard for many of us to believe, because everything about our culture teaches us that if we can design and be smart enough, we can go straight to a great discovery or invention. But in truth, anything that we can design and plan is usually going to be pretty simple and not very exciting.

Discovery is a different thing. Usually it’s like this: “Ah! What happened here?” And that’s the kind of feeling I always wanted to have. I got it from the ocean when I grew up as a kid working with people. Fishermen would let me come in the boat crabbers on the Manasquan River. It’s amazing how much stuff there is in a river. When you dig in, there are worms down there and you learn to be fascinated. You figure out what’s alive and what isn’t alive. In a sense, I’m always looking for creatures.

When I got to be a chemist, I didn’t need to have real creatures anymore. I had unknown creatures that were things that could exist and might be used in great medicines. But until I got to Dartmouth, I didn’t know what it was, to think in an original way. You know, Emily Dickinson said such a powerful thing. She said she wanted to be surprised by what life was. What nature was. One of my favorite lines is, “The pedigree of honey does not concern the bee. A clover, any time, to him is aristocracy.”

Speaking of literature, you started your lecture by re-phrasing the title of Tolstoy’s short story “How Much Land Does a Man Require?” to “How much chemistry does a man need?”  What’s your answer to that question? Are you trying to do more in medicine using less chemistry in the lab?

Yes, with click reactions, because they’re reactions that won’t be interfered with. Nature can’t work that way. Nature needs all those little pieces, in all those amino acids. If she had to make the pieces over and over again, it would crash life. There couldn’t be life; it would just be a mess, a soup. But in chemistry, if I have one reaction that can click hundreds of blocks together, each block combination will give me a different property or potential medicine.

You’re a scientist who loves the liberal arts. Did Dartmouth have anything to do with that?

At Dartmouth, I read James Joyce’s Ulysses, and I didn’t think it would be easy to like, but I fell in love with it. I can make things in a lab, but my brain is inadequate when it comes to making sentences. I get really short-circuited quickly when I see something that is a fundamental vibration in what I’m learning.

I learned from Dartmouth to be honest about everything. I learned to really dig deep. I couldn’t have had a better science education. But it was liberal arts that made me really want to be more of a human being.