The Robert Clements Professor of Democracy and Politics will become interim director Dec. 1. 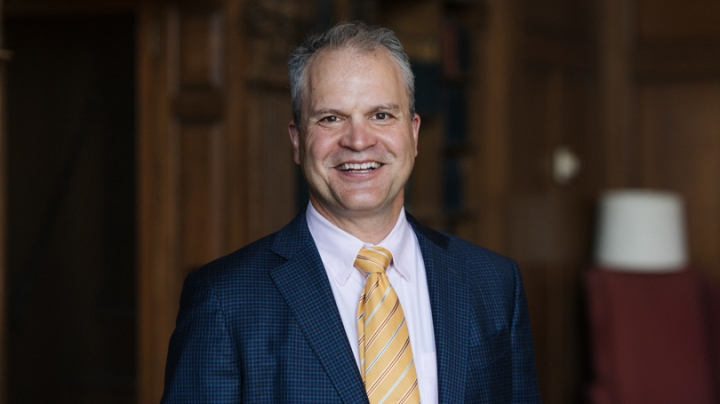 Russell Muirhead, the Robert Clements Professor of Democracy and Politics, has been named interim director of the Nelson A. Rockefeller Center for Public Policy. He will serve as the search continues for a permanent center director. His appointment is effective Dec. 1.

John Carey, the associate dean of the social sciences and the John Wentworth Professor in the Social Sciences, announced the appointment today.

“I’m grateful that Russ has agreed to lead the Rockefeller Center on an interim basis,” Carey said. “Russ has a proven track record of leadership in our division and across the College. I know he’ll bring enthusiasm and inspiring leadership to the role.”

Muirhead, who has been at Dartmouth since 2009 and is chair of the Department of Government, has recently co-taught courses on “Daniel Webster and the Dartmouth College Case” and “The Future of Capitalism.” His perennial offering, “American Political Thought,” attracts students from across the College.

Andrew Samwick, the Sandra L. and Arthur L. Irving ’72a P’10 Professor of Economics, stepped down as the Rockefeller Center’s director at the end of June to return to teaching and research after serving for 15 years in the role.

The search for his replacement is ongoing and has taken longer than anticipated, Carey says.

“We have the highest aspirations for the Rockefeller Center,” he says. “Our goal is to recruit a director who can bridge scholarship to the application of public policy on the ground, and who can find creative ways for Dartmouth students to contribute to our most pressing policy debates at the national and local level. Scholars with this rare combination of talents are in high demand, and we will be persistent in our search to hire the right person.”

The center has always been led by a tenured faculty member, and that is the current plan. Candidates need to go through Dartmouth’s tenure review process, which takes months and involves internal and external reviewers.

The Rockefeller Center, which offers a public policy minor, has a variety of opportunities for students who are interested in public policy research and topics. The center runs an undergraduate leadership fellows program, is the home of the Class of 1964 Policy Research Shop, and hosts a full schedule of speakers, workshops, and visiting scholars.

Muirhead says he’s looking forward to working with students and the staff at the Rockefeller Center.

“From the moment I arrived at Dartmouth, I’ve admired the center’s work. Its programs engage students in an intensive and transformative way, and, more importantly, inspire them to orient themselves to public-facing issues and effort. The center helps students understand that they can have what it takes to step forward and make a difference.

”I’m delighted to do all I can to support the good work Rocky does at Dartmouth and in the world,“ he says.

Muirhead is the author of A Lot of People Are Saying: The New Conspiracism and the Assault on Democracy (2019), which is about the recent rise of conspiratorial thinking in American politics. His research focuses on the ethical dimensions of constitutional democracy. He’s written about the place of partisanship in democratic citizenship (The Promise of Party in a Polarized Age, 2014) and the moral meaning of work (Just Work, 2004).

He is also a co-founder of the Political Economy Project, which brings together departments such as economics, government, and philosophy to address questions about capitalism and its alternatives.

Muirhead has degrees from Harvard University, where he received his PhD, and Balliol College, in Oxford, England, where he was a Rhodes Scholar.