Kathryn Cottingham and Robert Caldwell have been recognized by the scientific society. 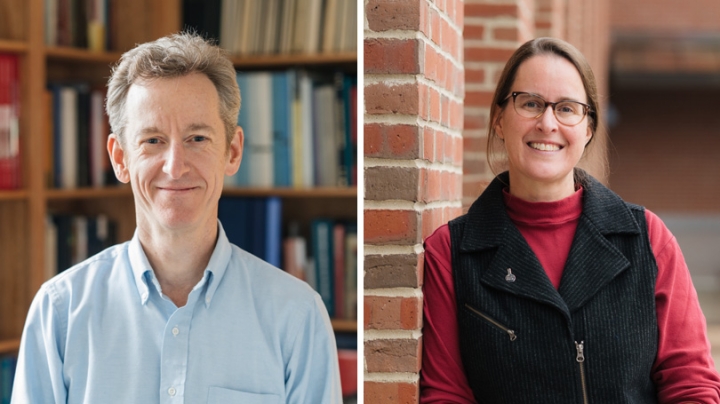 Professor Robert Caldwell and Professor Kathryn Cottingham are new fellows of the American Association for the Advancement of Science. (Photos by Eli Burakian ’00)
11/25/2019
Body

Robert Caldwell, a professor of physics and astronomy, and Kathryn Cottingham, the Dartmouth Professor in the Arts and Sciences and a professor of biological studies, have been named fellows of the American Association for the Advancement of Science (AAAS), the world’s largest general scientific society and the publisher of the journal Science.

They are among 443 scholars awarded the honor this year for their “efforts to advance science or its applications,” according to an announcement from AAAS.

“Congratulations to Robert and Kathryn on their well-deserved selection as AAAS Fellows,” says Provost Joseph Helble, who himself was named an AAAS Fellow in 2017. “This recognition speaks not only to their outstanding contributions to science as scholars and teachers, but to their leadership in the scientific community.”

In electing Caldwell as a fellow, AAAS cited his “array of distinguished theoretical contributions to cosmology, especially in the study of dark energy.”

A theoretical physicist, Caldwell studies the expansion of the universe. Much of his recent work focuses on the relatively new study of gravitational waves, which he describes as “a traveling disturbance in the gravitational field” created when heavy stars or black holes collide.

“If you can measure these waves—and people can measure them now—then you can detect the motions of black holes at distant locations in the universe,” Caldwell says. “I’m working with a group that’s looking ahead to the year 2030 to put a gravitational wave detector in space.”

That detector, known as the Laser Interferometer Space Antenna (LISA), will consist of three triangulated satellites that will shoot laser beams at each other across distances of more than a million miles.

“You can’t fit it on Earth,” Caldwell says of the project, a collaboration of NASA, the European Space Agency, and an international consortium of scientists. “Using LISA, it’s hoped that we’ll be able to detect the collision of some of the biggest black holes in the universe. So it will be really exciting.”

Of Dartmouth, Caldwell says, “I like the quietude that lets you concentrate on things, and also that I have the freedom to adapt my classes to focus on things that I think are interesting.”

In his current course on general relativity, for instance, “I try to bring in elements of cosmology or black holes that I find particularly exciting,” he says. “Maybe that attracts them into physics, but at the very least I want to make them a fan of cosmology and physics and science in general.”

Of being named an AAAS fellow, Caldwell says, “It’s an honor to be recognized by the scientific community. It feels good.”

The AAAS cites Cottingham’s “distinguished contributions to the fields of limnology and ecosystem science, and for applications of those basic science contributions to bettering human health.”

“The thrill for me is the recognition that my work matters in the broader field of science, beyond my own subfield,” says Cottingham.

An ecologist, Cottingham specializes in lakes, in particular studying the cause of cyanobacterial blooms.

“Cyanobacteria produce toxins that can kill dogs and make people sick. These toxins may also cause cancer over long periods of time. So we’re trying to understand the ecology of cyanobacteria so we can potentially prevent the blooms—and toxins—from happening,” she says.

She and her lab are in the 15th year of a study of blooms in New Hampshire’s Lake Sunapee—a project launched by one of Cottingham’s then-undergraduate students. And recently, she and her team have begun collaborating with Assistant Professor of Computer Science Alberto Quattrini Li on a new National Science Foundation-Established Program to Stimulate Competitive Research (NSF-EPSCoR)-funded project to study the blooms with robots and drones.

“My hashtag for the project is #robotsdronesbloomsohmy,” she says. “We’re bringing all these new tools and technologies to help with this problem that we have not been able to answer with conventional approaches.”

In addition to lake ecology, Cottingham has collaborated with colleagues at the Geisel School of Medicine to apply ecological models to the study of arsenic exposure in children.

This year, Cottingham—who was recently named editor-in-chief of Ecology, the flagship journal of the Ecological Society of America—returned to Dartmouth after two years at the NSF, where she served as a program officer reviewing environmental biology research funding.

“I came back very excited about where science is and where it might be going, and I hope to ripple that back to my colleagues here,” she says.