Shannon Sartain ’21 is an author of ‘PNAS’ article on mining’s effect on Peruvian rivers. 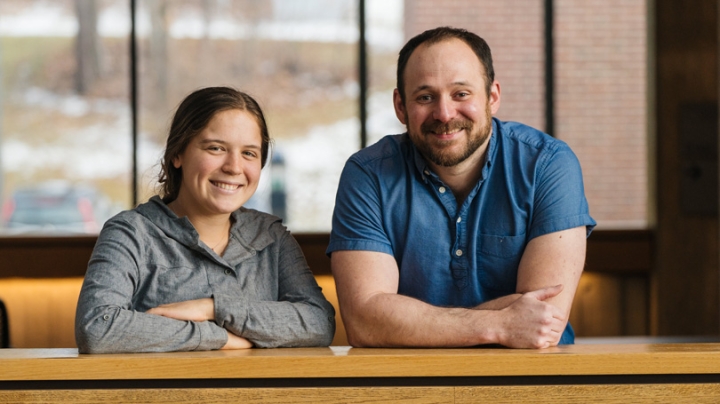 Shannon Sartain ’21 and Research Assistant Professor David Lutz, along with PhD student Evan Dethier, Guarini ’15, Guarini ’20, not pictured, published a study of the impact of gold mining on water quality in the Amazon basin in the journal Proceedings of the National Academy of Sciences. (Photo by Eli Burakian ’00)
11/25/2019
Body

Shannon Sartain ’21, along with lead author Evan Dethier, Guarini ’15, Guarini ’20, and Research Assistant Professor David Lutz, was published this month in the Proceedings of the National Academy of Sciences (PNAS), one of the most selective science journals in the world.

Sartain began working with Dethier as a first-year student in the Women in Science Project (WISP), which supports women in STEM fields, and continued her research work with Dethier and Lutz, an environmental scientist specializing in ecosystem modeling, through grants from Undergraduate Advising and Research (UGAR).

The trio’s study of the effects of artisanal-scale gold mining on water clarity and dynamics in the Madre de Dios River watershed of Peru was one of the first studies to examine the environmental impact of this industry on rivers and streams in the Amazon basin. The originality of the research—which used 35 years of satellite imagery—and its potential to inspire future multidisciplinary research on the topic, were likely important factors in the decision of the PNAS editors to publish the work, says geography professor Frank Magilligan, the Frank J. Reagan ’09 Chair of Policy Studies and one of Dethier’s PhD advisers.

“This is a huge deal. PNAS is one of the most impactful scientific journals out there,” says Magilligan. “They really want to publish research that is going to resonate across the sciences.”

And the fact that the second author is an undergraduate is a testament to the valuable work of the Women in Science Project, Magilligan says.

“WISP is about trying to deal with the higher attrition rate of young women scientists who come into Dartmouth—mentoring work that chemistry professor Karen Wetterhahn started more than 25 years ago. Shannon got a start in our lab, and she’s taken the ball and run with it. We should herald the fantastic mentoring work happening at Dartmouth. The representation of that is she’s a junior who is now second author on an article in PNAS.”

Reached by phone in Nevada after concluding a semester with the Stretch, earth sciences’ field program across the American West, Sartain says the significance of being published in PNAS is starting to sink in.

“It hadn’t clicked until recently, with the amount of congratulations that we’ve been getting,” Sartain says. “I have what I think is a lot of research experience for an undergrad, but I don’t have a lifetime of it that some people do, so it’s really cool.”

Sartain says she is grateful to the network of WISP mentors who offer opportunities to first-year Dartmouth women to become part of cutting edge scientific research.

“Evan and Dave and Carl (Renshaw, professor of earth sciences) are all really awesome mentors and want me to succeed and want to include me in projects that they know I’ll learn from, so I’m really appreciative of them.”

Dethier and Lutz say WISP does more than offer mentoring and research opportunities to first-year women: It has also brought many talented and motivated developing scientists like Sartain into research projects at Dartmouth.

As their research into the effect of artisanal gold mining on water quality moved into the rigorous editing and revision stages that go along with submitting research to a top scientific journal, they made sure Sartain was part of the process, Lutz says.

“In addition to contributing excellent research and analysis in working with the satellite data, Shannon was there in the meetings and in on the emails as we were writing and revising, so she’s learning how this level of science gets done,” Lutz says. “And we all had meetings with Frank Magilligan, because this level of scholarship and the protocols for submitting to the National Academy of Sciences require some nuance that he was able to help us with.”

It is this level of involvement that makes the WISP program and undergraduate research opportunities at Dartmouth in general extraordinary, Magilligan says.

“Shannon did a lot of the work, and she was also part of the conversation about the articulation of the project and its methodological approach, and that’s what got her the second author spot. She was a fundamental part of the intellectual exchange that went into that article,” Magilligan says.

“The good news is that she is only a junior and she is already working on another manuscript with Evan—that’s quite an accomplishment and a testament to her abilities and drive.”