The institution’s founding document was the focal point of an event at the Library. 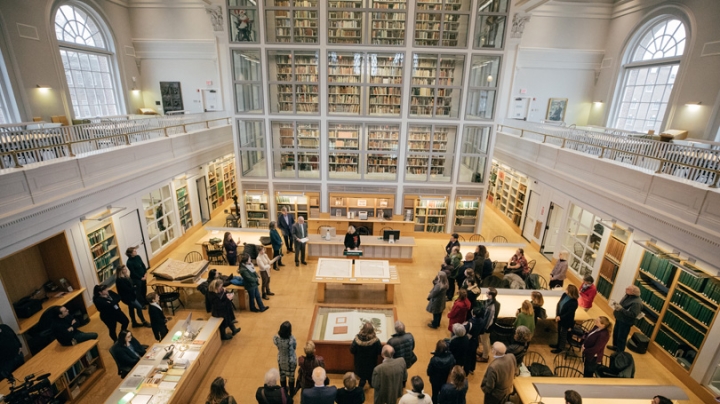 Even the best birthday party has to end sometime. And what more fitting way to conclude Dartmouth’s yearlong 250th celebration than by commemorating its founding on Dec. 13, 1769?

On Friday—Charter Day—members of the College community gathered in Dartmouth Library’s Rauner Special Collections Library, around a glass display case holding the Royal Charter that N.H. Gov. John Wentworth granted to Eleazar Wheelock “for the education & instruction of Youth of the Indian tribes in this Land.”

Charter Day was also celebrated around the world, as landmarks were lit up in green. An ice-skating party in Cambridge, Mass., featured CNN’s Jake Tapper ’91 and retired Boston Bruins player Lee Stempniak ’05, among other guests.

In her welcoming remarks at Rauner, Dean of Libraries Sue Mehrer said the sestercentennial’s many events relied heavily on the library’s holdings. “This year’s adventures in the archives have helped us extract unknown narratives of our past that teach us who we are,” she said.

President Philip J. Hanlon ’77 said that while the charter document is a reminder of Dartmouth’s past, “we are never fully beholden to it. Indeed, it is the choices that we make and the values we choose to uphold throughout time that determine our destiny. We must always remember that Dartmouth as an institution is a work in progress and that our story is still being written.

”Our 250th anniversary has motivated us to reflect on how this institution has advanced from the earliest days of its founding, through the education of our students, through the path-breaking research and areas of global import, throughout creative endeavors that have helped us understand and make sense of the world, and through our commitment to making the world a better place.“

”The whole community came together—faculty, staff, alumni, families, students—to make a difference for our anniversary,“ Bascomb said. ”Everybody has been involved.“

Bascomb also paid tribute to the Abenaki people who lived and continue to live on the land where Dartmouth was built. ”Fifty years ago, for our 200th anniversary, President John Kemeny recommitted Dartmouth to its founding purpose, establishing a Native American studies program and directing admissions to actively recruit Native students as a community devoted to teaching and learning,“ she said.

Charter Day concludes a commemoration that began with a re-enactment and symposium about the landmark 1819 U.S. Supreme Court Case, Trustees of Dartmouth College v. Woodward, which established Dartmouth’s right to be a private institution and set an important precedent in American law. Pease spoke about the charter and the case as defining moments in the history of a college willing to embrace change in service of its founding mission.

”The immortal aspect of our institution—what makes it undying—depends upon its individuality,“ he said.

After the ceremony, Wright talked about how Dartmouth has changed since its 1969 bicentennial year, when he joined the faculty in the history department.

”The Dartmouth that I came to had 3,200 students, 95 percent of them white,“ said Wright. ”There were no women, and few international students. Dartmouth today is a remarkably different, global, energetic place that President Hanlon is moving ahead so wonderfully.

“And when the president said that Dartmouth was a work in progress, I think that’s an essential thing to remember. If we are ever not a work in progress, we are in trouble. We should never reach a point where we’re satisfied. We are always thinking of what we can do better.”