Dartmouth Economist Gets a Nobel Shout-Out in Stockholm 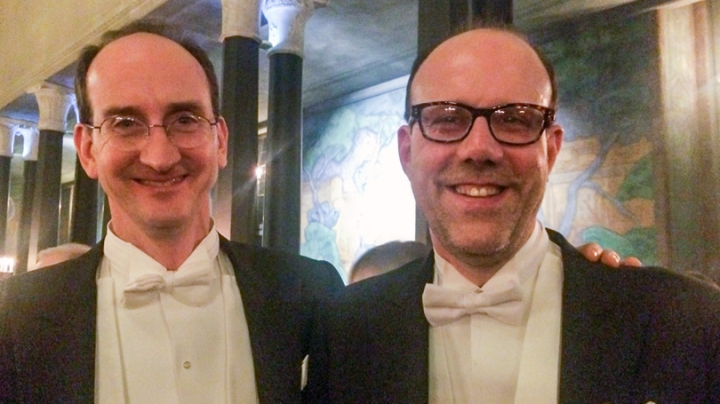 This year’s winner of the Nobel Prize in economics gave a shout-out to longtime collaborator Christopher Snyder, the Joel Z. and Susan Hyatt Professor of Economics, during his Nobel lecture on Sunday at Stockholm University.

Michael Kremer, a professor at Harvard, shared the 2019 economics prize with Abhijit Banerjee and Esther Duflio, a married couple who both teach at the Massachusetts Institute of Technology, “for their experimental approach to alleviating global poverty,” the Nobel committee wrote.

Kremer had invited Snyder, a co-author on numerous papers, to attend the week’s events in Stockholm, so he was in attendance when Kremer mentioned one of their research projects during his Nobel Prize lecture on Dec. 8. Snyder also attended the award ceremony and banquet hosted by King Carl Gustaf Folke Hubertus of Sweden on Dec. 10.

“Rachel Glennerster, Chris Snyder, Owen Barder, and I have also been involved in research on ways to harness the power and energy of private sector innovation to address specific needs of some of the world’s poorest people,” Kremer said. “So, for example, under current institutions the private sector may not invest enough in vaccines needed in developing countries. We propose that donors commit in advance to help finance the purchase of vaccines for developing countries’ needs if they were developed. Such a commitment could provide an incentive for the development of such vaccines and ensure that if the vaccines were developed, price would not be a barrier to access.”

Snyder said he was honored by the invitation. “They have a small number of people they get tickets for. The king makes room for them at the table,” Snyder said. “I figured it’s not every day that your co-author invites you to watch him get his Nobel Prize, so I said ‘yes! Absolutely.’ ”

Their collaboration began when Kremer was a new professor at MIT and Snyder was a graduate student. “He just loves ‘big think’ ideas,” Snyder says. “He’s just a brilliant guy. It’s been fun to work with him over—I think it’s been 20 years.”

After Kremer went on to Harvard and Snyder came to Dartmouth, they continued their collaboration, and have co-authored eight papers since. Snyder and Kremer have also included two Dartmouth undergraduates in recent years as co-authors on briefs on current theory in economics journals: Natalia Drozdoff ’17, now a PhD student in economics at Yale, and Albert Chen ’20.

“I try to take every opportunity I can to integrate undergraduates in my work. So on a policy brief for example, I might say, ‘Hey, Michael, how about we enlist a Dartmouth student on this’ if I have an excellent research assistant,” Snyder said.

Snyder says he typically gives his student the opportunity to do some initial writing, for example, and then Kremer and he will start a conversation and work through drafts of the paper, including the student along the way.

“Dartmouth’s economics department is unique in that we are very highly regarded in terms of research rankings and citations. We’re trying to be at the cutting edge and at a very high level of research, but we’re doing it without graduate students,” Snyder said. “It’s very rare for undergrads to be involved at that level—to be able to work closely, for example, with a Nobel economist.”