The Menorah: A Symbol of Light

Hanukkah begins Sunday, with the lighting of two menorahs on campus. 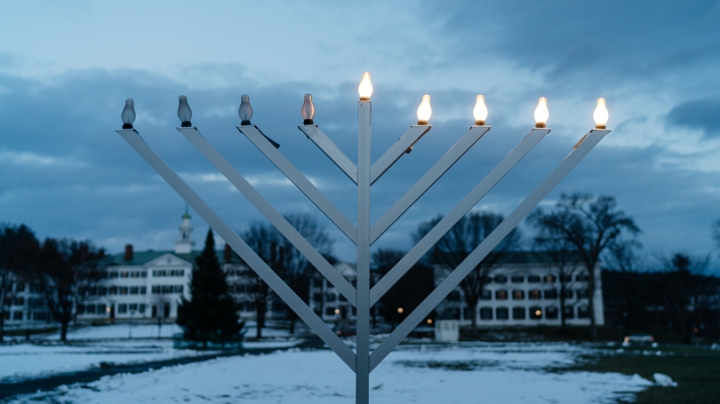 On Sunday, Dec. 22, the lighting of two menorahs, one on the Green and another at the Roth Center for Jewish Life, will signal the beginning of the eight days of Hanukkah. The menorah on the Green is sponsored by Chabad, one of the groups overseen by Tucker Center for Spiritual and Ethical Life. The menorah at the Roth Center, which also serves the Upper Valley Jewish Community, is sponsored by Dartmouth Hillel.

The menorah traces its origins to the second century B.C.E., says Rabbi Daveen Litwin, dean and chaplain of the Tucker Center for Spiritual and Ethical Life. Rabbi Litwin spoke with Dartmouth News about the history and symbolism of the ancient oil lamp.

What is the origin of the menorah?

In Hebrew, the word menorah means “lamp.” The ancient menorah had seven branches—one for each day of Creation—and it burned in the Temple in what was then Judea, a small area caught in the middle of conflict between the Egyptian empire and the Greek-Assyrian empire. It was an everlasting light, an oil lamp that was never supposed to go out. Those two empires clashed in 167 B.C.E., and under the ruler Antiochus IV, Judea became Hellenized. Antiochus outlawed Judaism. The Jewish people were told they could not keep the Sabbath, they could not keep kosher, and the Temple was desecrated. A small group of people rebelled, and they became known as the Maccabees. Over several years, they were able to take back the Temple and relight the menorah. As the story goes, one day’s worth of oil miraculously lasted for eight days. That’s why the Hanukkah menorah has nine candles: one for each of the eight days, and one to light the rest. The Hanukkah menorah is more accurately called a hanukkiyah.  One additional oil wick or candle is lit each night to celebrate the eight days of Hanukkah.  By the way, oil also finds its way into Hanukkah foods such as latkes—potato pancakes fried in oil—and delicious jelly-filled doughnuts called “sufganiyot.”

Is Hanukkah a time of sacred holy days in the Jewish calendar? Or more like a festival?

It began as a delayed celebration of Sukkot, an eight-day agricultural festival that also recalled the time of wandering in the desert. The Jewish people had not been able to celebrate Sukkot in the fall, during the Maccabean rebellion. It’s harvest festival, a time of joy. One of the things that happens in Sukkot is the singing of Hallel—Psalms of Praise—so during Hanukkah we sing those same songs of thanksgiving.

Hanukkah means dedication. Historically, Hanukkah marks the rededication of the sanctuary itself. The story of the oil and how it lasted for eight days came later in Jewish tradition. And it was most likely an attempt by the rabbis to take a story that began as a military saga and shift the emphasis to the importance of religious freedom and hope and light.

Do you see any common threads linking Hanukkah with other religious observations that happen this time of year?

In faiths throughout the world, there’s power in the metaphor, the imagery, of light. Hindus have their own festival of light, called Diwali, which was beautifully celebrated in Rollins Chapel at the end of October. The Buddhist’s day of enlightenment is Bodhi Day, on Jan. 2 this year, when they string trees with beads and lights, similar to the way Christians light Advent candles and decorate an evergreen. For Hanukkah, the menorah was traditionally put on a shelf on the outside of the house to show that this was a Jewish home. Now it’s often put on a windowsill, to shine a light through darkness at a time of year when the days grow short.

What do you think the menorah, and Hanukkah, signify in our modern world?

It’s really a minor holiday in the Jewish calendar, but it’s grown in significance. One way to view it, even if you are not Jewish, is that it celebrates the miracle of people looking after one another and doing what is right. In a traditional hanukkiyah, the candles representing each day are not higher than one another. In a divisive world, we have rituals to remind us that there’s danger when we lift one group over another, and there’s hope and beauty when we connect to one another as equals. 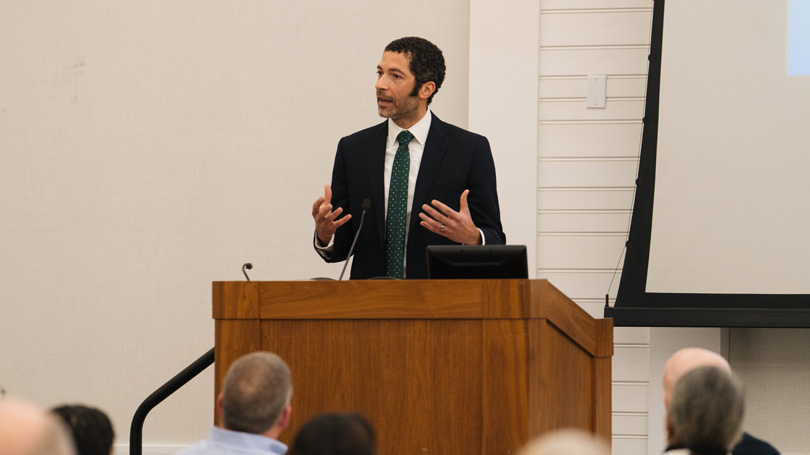