Peter Orner on the Art of Reading and Writing

The professor of creative writing is the author of ‘Maggie Brown & Others.’

“You end up forgetting the people you shouldn’t and remembering the people who’ve forgotten all about you,” award-winning author and Dartmouth Professor of English and Creative Writing Peter Orner writes in the title story of Maggie Brown & Others, his latest collection of short fiction.

“For me what echoes, what reverberates, what I often relive and relive, are those times that were cut short, times so fleeting they hardly even happened.”

As in many of the other short—sometimes very short—stories in this collection, not much seems to happen (spoiler: the Chekhovian gun the narrator purchases four pages in never does go off), yet somehow, everything does. Orner is a master of the small, illuminative moments that shape the arc of human lives.

Readers and critics are taking note. Maggie Brown has been featured on several best-books-of-the-year lists, including The New York Times’ 100 Notable Books of 2019, Chicago Tribune’s Best Books of 2019, Kirkus Review’s Best Short Fiction of 2019, and Oprah’s Book Club, where it comes in at No. 2, between Ta-Nahesi Coates’ The Water Dancer and Ann Patchett’s The Dutch House.

“I met Oprah once as a high school kid growing up in Chicago. She was larger than life even then,” says Orner. “So, yes, I’m incredibly honored.”

This month, Maggie Brown was awarded the Edward Lewis Wallant Award, among the oldest and most prestigious awards for Jewish Fiction in the United States. Previous winners include Cynthia Ozick, Jonathan Rosen, and Nicole Krauss.

Maggie Brown is Orner’s sixth book—he is the author of two novels and two previous story collections, as well as a collection of essays, Am I Alone Here: Notes on Living to Read and Reading to Read, that traces his life as a reader. That collection was named a National Book Critics Circle Award finalist.

“To me, reading is a form of writing, in a weird way,” he says. “I can’t do one without the other. A few years ago I was in a rut, and I found that if I read in the morning and then sort of riffed off that reading, that that could get me going. It was a way of reentering fiction. I don’t know what I would do if I couldn’t read.”

Orner’s writing life was shaped in part by his experience as a teacher in Namibia in the early 1990s, when he was a volunteer with the NGO World Teach. His first novel, The Second Coming of Mavala Shikongo, was set there. “It’s based on the experiences I had as a volunteer at the dawn of Namibia’s independence,” he says. “It was a wild time. To watch a country being born.”

The experience led him to return two decades later as a Fulbright Scholar at the University of Namibia. “I’m working on a nonfiction book based on the archival research I did there,” he says. “Namibia is one of my favorite places on Earth. It was also—not enough people know this—the country that experienced the first genocide of the 20th century. The book in progress is about this period in Namibia’s colonial history.”

Of teaching at Dartmouth for the past two years, he says, “I love it here. Northern New England and this campus are an incredibly vibrant place to be. I have talented and generous colleagues. And my fiction students here have been absolutely wonderful to work with. They are so engaged from the minute they walk in the door.”

His approach to teaching novice writers is to demystify the academic workshop. “In some ways the codification of storytelling in a classroom setting can be problematic—the academic sphere can make it feel contained,” he says.

“I always remind my students that this is about connecting to a reader as a storyteller. On the first day, students come in and say, ‘I’ve never done this before.’ I’m like, ‘How many stories have you told today, before you walked in the door, to your roommate, to your parents?’ I find it exciting to try to harness that ability that they pretty much already have.”

Above all, he wants to foster in his classes a sense of literary community. “That is essential for developing storytelling and critical reading skills,” he says. “You’re interchanging ideas with others who have read the same stuff. Incredible things can happen if you give a piece of literature to a classroom and see what happens.” 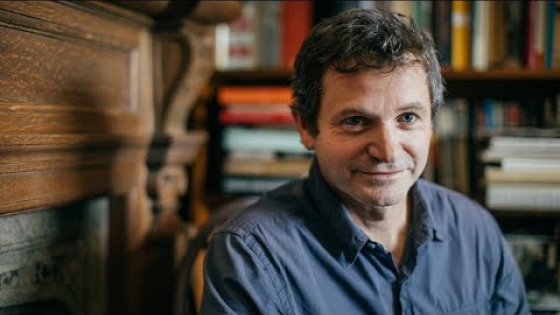