Sarah Pearl ’20 Is a Marshall Scholar

The prestigious award will let the physics and environmental studies major study in the U.K. 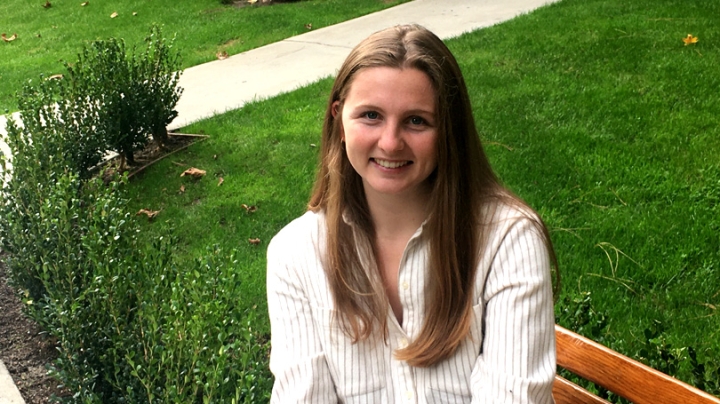 “I hope to use the Marshall as a starting point for future academic and professional endeavors abroad," says Sarah Pearl ’20. (Photo courtesy of Sarah Pearl ’20)
12/08/2019
Body

Sarah Pearl ’20, a double major in environmental studies and physics from Los Angeles, has been named a Marshall Scholar. She will use the scholarship to pursue two years of graduate study in the United Kingdom, at the University of Reading and the University of Oxford.

Up to 50 Americans each year are selected for the award, which was created by the U.K. government in 1953 in honor of U.S. Secretary of State George C. Marshall’s work to restore Europe in the aftermath of World War II. The program aims to “strengthen the enduring relationship between the British and American peoples, their governments and their institutions,” according to the program’s website.

“Congratulations to Sarah on this achievement, which the entire Dartmouth community can be proud of,” says Provost Joseph Helble. “To be named a Marshall Scholar is a testament to her academic excellence, leadership ability, and intellectual curiosity, which reflect the best tradition of the liberal arts.”

In the U.K., Pearl will work toward two master of science degrees: the first in atmosphere, oceans, and climate at Reading; the second in environmental change and management at Oxford.

“This is my ideal combination of coursework,” Pearl says. “I’ll have the chance to delve deeply into both the scientific and socio-political dimensions of climate change and environmental problems. I’m interested in environmental issues at the international level, so I hope to use the Marshall as a starting point for future academic and professional endeavors abroad.”

Pearl says her academic interests are driven by a deep concern about the threat of climate change. “Learning about the technological innovations and policy measures currently being researched and implemented to combat the problem really excites me,” she says.

“My Dartmouth education has encouraged me to find connections between seemingly disparate academic fields, namely physics and environmental studies,” she says. “Double majoring equipped me with the kind of interdisciplinary thinking necessary to get the most out of the degrees I plan to pursue in the U.K.”

She credits her professors with helping her to “develop the courage of my convictions to continue studying the issues I care about. I have them to thank for this opportunity.”

At Dartmouth, she was a James O. Freedman Presidential Scholar for Robyn Millan, the Margaret Anne and Edward Leede ’49 Distinguished Professor of Physics, assisting Millan’s research on high-energy particles. She is currently working on a senior thesis in environmental studies that considers the potential of solar geoengineering to offset climate change from a technological, ethical, and policy perspective.

Through the Nelson A. Rockefeller Center for Public Policy, she spent a term as a research intern at the Climate Institute in Washington, D.C., and was a National Science Foundation undergraduate researcher at the International Arctic Research Center in Fairbanks, Alaska, where she studied changing wind trends, research that she will be presenting this month at the 2019 American Geophysical Union conference in San Francisco and has published as a co-author in the Journal of Atmospheric and Climate Sciences.

These experiences solidified her desire to bridge what she sees as a divide between “the political and scientific worlds. I decided that I wanted to continue studying climate change through a cross-disciplinary lens in graduate school and beyond.”

Among her other Dartmouth activities, she volunteered with Growing Change, teaching local elementary school students about sustainability and the environment, and served as a writing tutor for the Student Center for Research, Writing and Information Technology (RWIT).

Through the John Sloan Dickey Center for International Understanding, she spent a summer in Jerusalem as an intern with Seeds of Peace. “This experience opened my eyes to cultures and communities I previously knew little about and helped me forge connections with people I never would have had the chance to meet otherwise,” she says.

Millan calls Pearl “an outstanding student with a unique capacity to lead and organize others.”

“She has all the attributes to become a leader in tackling the world’s environmental issues,” Millan says. “This is a well-deserved honor.”

Of receiving the Marshall Scholarship, Pearl says, “I am so honored and excited. I think it demonstrates how strong a support network I was lucky to find at Dartmouth. I am so immensely thankful to all my professors and mentors, along with my family and friends. And I also want to give a huge thank you to the fellowship office and (Assistant Dean of Faculty for Fellowship Advising) Dr. Smolin for encouraging me to apply.”

For information about applying for Marshall and other programs, visit Dartmouth’s Fellowship Advising Office.