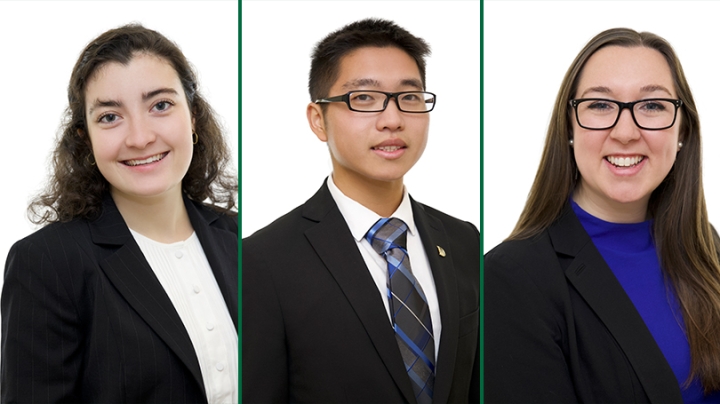 From left, Delia Friel ’20, Danny Li ’19, and Colleen O’Connor ’19 were named 2021 Schwarzman Scholars. They will begin a year of study at Schwarzman College at Tsinghua University in Beijing, China in August 2020. (Courtesy of the Schwarzman Scholars program)
12/04/2019
Body

In a Dartmouth record,  two alumni and one undergraduate have been named 2021 Schwarzman Scholars. Delia Friel ’20, Danny Li ’19, and Colleen O’Connor ’19 join 142 other top students from around the world who will receive a fully funded scholarship to study at the Schwarzman College at Tsinghua University in Beijing.

The 2021 cohort, the fifth Schwarzman class since the program welcomed its inaugural scholars in 2016, was selected from more than 4,700 applicants and includes students from 41 countries. Schwarzman Scholars pursue a master’s degree in global affairs with a core curriculum focused on three pillars: China, global affairs, and leadership.

“Delia, Danny, and Colleen have demonstrated an outstanding commitment to public service and scholarship that will not only serve them well as Schwarzman Scholars, but will also represent Dartmouth well on the global stage,” says Provost Joseph Helble.

Founded by Stephen Schwarzman, chairman, CEO, and co-founder of the global investment firm Blackstone, the program seeks to prepare a new generation of international leaders “to respond to the geopolitical landscape of the 21st century,” according to the program’s website.

For information about applying for Schwarzman Scholarships and other programs, and to see a list of past recipients, visit the Office of Fellowship Advising .

Delia Friel ’20 is majoring in biomedical engineering with a minor in Spanish. As a James O. Freedman Presidential Scholar, Friel worked as a research assistant studying the mechanics of morphogenesis in embryonic brain and heart development at Thayer School of Engineering and was a learning fellow for a scientific computing class at Thayer, serving as a teaching assistant. She served as a counselor for the U.S. State Department’s Women in Science Program in Kosovo and was an intern for the Ways and Means committee in the U.S. House of Representatives. She was also a player on Dartmouth’s national championship women’s rugby team in 2018.

“I am absolutely overjoyed and honored to be a Schwarzman Scholar,” Friel says. “I want to thank Dartmouth and my professors for their support and preparation over these past four years. This is an absolute dream come true, and I am excited to continue learning about the intersection of global affairs and science.”

Friel says she looks forward to learning more about China and thinking about how the global community can work to pursue innovation and improve healthcare delivery.

At Dartmouth, Danny Li ’19 served as class president for four years, founded two student organizations focused on international diplomacy and foreign policy, and served at the helm of six other student organizations including the Dartmouth Law Journal, graduating as a class marshal. As a Rockefeller Leadership Fellow at the Nelson A. Rockefeller Center for Public Policy, he was involved in a range of public policy programs, including as an intern at the Association for Diplomatic Studies and Training and writing memoranda on the 2018 National Defense Strategy.

Li currently serves as an analyst at The Asia Group, leading the firm’s portfolio in identifying and assessing geo-economics and trade trends in Asia, and conducting research for the firm’s China practice, assessing political and market developments taking place in mainland China in order to provide insights for U.S. companies.

“I am excited for Schwarzman because I see it as an opportunity to engage in a deep yearlong discussion about the economic, political, and technological trends and developments that are taking place in China as well as Asia more broadly, and to think deeply about how the United States and China fit into that changing global landscape,” Li says.

At Tsinghua, Li plans to explore the economics, business, and international studies curriculum and take advantage of the Schwarzman Deep Dive and Practical Training Project opportunities to explore how the Chinese system of government creates policy, with a focus on understanding of cross-cultural governance and tackling real-life policy challenges in mainland China.

“I hope to emerge from this experience enriched and better equipped to shape and inform Asia policy in Washington, D.C.,” Li says.

Colleen O’Connor ’19 describes herself as “a tri-lingual social entrepreneur passionate about creating social change through the private sector.” She graduated as salutatorian and a class marshal. As an undergraduate O’Connor studied Chinese, economics, and human-centered design and was a leader of Women in Business and the Dartmouth Entrepreneurial Network, part of the Magnuson Center for Entrepreneurship at Dartmouth.

She has spent the past three years promoting entrepreneurship as a vehicle for female empowerment in South America and East Asia, which she started as a Stamps Scholar at Dartmouth. Professionally, O’Connor works in business strategy consulting at EY-Parthenon in Boston, and formerly worked with startups and nonprofits in Japan, China, Mexico, and Peru.

“My heart is absolutely bursting with gratitude—both for this amazing opportunity and for the family, friends, and professors who helped get me to this point,” O’Connor says. “I am still in a little bit of shock that I get to return to China for a fourth time, but this time surrounded by a cohort of future leaders and supported by some of the preeminent forces in business, politics, and academia.”

At Tsinghua University, she plans to take classes in international relations and public policy with the aim of becoming a more globally oriented leader. O’Connor says she is interested in exploring the contradictions of a country that has the highest number of self-made female billionaires yet have remnants of culturally enforced gender discrimination and male preference that still affect female entrepreneurs within the economy’s informal sectors.

“As someone passionate about social entrepreneurship, I hope to use this opportunity to fully embrace the culture and better understand why some of these seemingly contradictory practices occur simultaneously in China,” she says.

Since graduating from Dartmouth, O’Connor has also committed to attending Harvard Business School, where she has deferred enrollment until the fall of 2021, following the Schwarzman Scholars program.