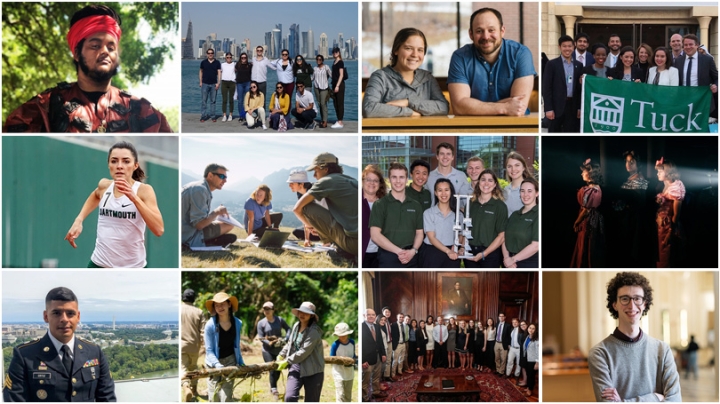 This is the second in a three-part series highlighting some of the stories that shaped the Dartmouth community in the College’s 250th year. Read part one, highlighting events from around campus and beyond, and part three, highlighting faculty accomplishments.

The past year brought intellectual adventures both on and off campus, as Dartmouth students excelled in the classroom, on the playing fields, and across the globe.

In the fall, 22 undergraduates set out with six faculty members on the College’s one-of-a-kind odyssey, the Stretch, a two-and-a-half month road trip covering nearly 3,000 miles across six states and provinces. As geologists-in-training, they lived, traveled, and worked together, measuring the depth of glaciers, mapping bedrock formations, collecting data from rivers, and analyzing their findings.

“At the end, we had built ourselves this overarching narrative of the geologic history of North America,” said Kellen Appleton ’20.

For War and Peace Fellows from the John Sloan Dickey Center for International Understanding, the destination was Qatar, where, during winter break, they got a first-hand view of foreign policy, attending the Doha Forum, a high-level international affairs summit, and meeting with U.S. and Qatari diplomats in the Persian Gulf state. Elsewhere on the globe, the Frank J. Guarini Institute for International Education sponsored foreign study programs (FSPs) in Morocco, Rome, and South America, among other countries.

There’s no FSP to Mars—yet—but a group from Thayer School of Engineering won NASA’s 2019 BIG Idea Challenge for its innovative design of a Mars greenhouse that could grow food and sustain a crew of astronauts on a future mission to the red planet.

Other stellar science projects include research by Shannon Sartain ’21 on the impact of gold mining on water quality in the Amazon basin, published with faculty co-authors in the prestigious Proceedings of the National Academy of Sciences (PNAS).

Lucayo Casillas ’19 was among many students who wove travel into academic work. For his senior honors thesis, he spent several weeks in Jamaica gathering oral history for his book-length thesis about Maroons—Africans who escaped slavery and established independent communities during the 17th and 18th centuries.

In the spring, students from the East Wheelock house community went to Puerto Rico and volunteered with El Departmento de la Comida (El Depa), a sustainability and food-justice collective devoted to empowering the island’s communities to be ecologically resilient through local and sustainable farming. It was one of a series of alternative spring breaks devoted to community service around the globe.

Five students and two recent alumni were selected by the Fulbright Program to study or teach in Spain, the United Kingdom, Hungary, South Korea, and Cambodia. Aaron Karp, Guarini ’19, a master’s candidate in digital musics, received a Luce Scholarship from the Henry Luce Foundation to work with professional artists in Asia next year.

Here at home, student actors and crew ventured Into the Woods for the spring mainstage production. And Dartmouth’s student-athletes gave fans much to applaud, as well. The women’s track team won the 2019 New England championship, cross-country skier Katherine Ogden ’21 won the NCAA National Championships in both the classic and freestyle races, and, in football, the Big Green finished the season with a 9-1 overall record and a 6-1 mark in the conference, sharing the Ivy League title with Yale.

View a list of top stories. And watch for tomorrow’s story, focusing on faculty.