Top Stories From 2019: Faculty Continued to Inspire and Innovate

The third in a three-part series looking at the top stories from Dartmouth’s 250th year. 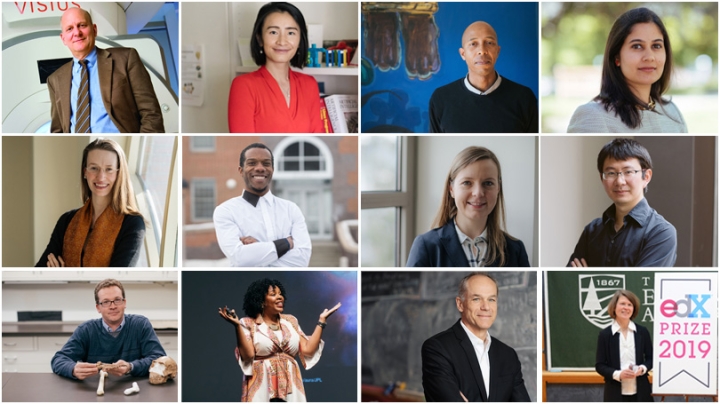 This is the third in a three-part series highlighting some of the stories that shaped the Dartmouth community in the College’s 250th year. Read part one, highlighting events from around campus and beyond, and part two, highlighting students’ accomplishments during the past year.

Over Dartmouth’s 250th year, the College’s faculty have continued to inspire in the classroom, lead in the creation of new knowledge, and break new ground through innovation and invention, earning many high honors from prestigious institutions and academic associations.

Four new scholars joined Dartmouth’s academic cluster initiative—created in 2014 to amplify Dartmouth’s existing strengths in order to tackle some of humanity’s greatest challenges. Colin Meyer, assistant professor of engineering at Thayer School of Engineering joins the cluster on Arctic Engineering in a Period of Climate Change. Paul Robustelli, who joins the faculty in January 2020 as an assistant professor of chemistry, will work in the William H. Neukom Academic Cluster in Computational Science. Benjamin Ross, assistant professor of microbiology and immunology at Geisel School of Medicine, joins the Personalized Treatments for Cystic Fibrosis cluster, and Tor Wager, the inaugural Diana L. Taylor 1977 Distinguished Professor of Neuroscience, joins the Breaking the Neural Code academic cluster.

Some highlights from the world of discovery include Associate Professor of Anthropology Jeremy DeSilva’s ongoing work on the discovery of Australopithecus sediba, a 2-million-year-old human ancestor whose fossilized remains were discovered in South Africa in 2008. DeSilva published his research on this new human ancestor in a special issue of PaleoAnthropology dedicated to that discovery. Caroline Robertson, an assistant professor of psychological and brain sciences, launched the Dartmouth Autism Research Initiative (DARI), which is devoted to understanding biomedical causes of autism while seeking to improve the lives of individuals on the autism spectrum. And Assistant Professor of Physics and Astronomy Elisabeth Newton led a research team that discovered an exoplanet—a planet outside our solar system.

Always, the scholarly work of Dartmouth faculty is linked to teaching and learning. Professor of Anthropology Jesse Casana led his students on an excavation on the lawn of Dartmouth Library’s Baker Berry Library, unearthing the foundation of the 18th-century Ripley-Choate House, and David Lutz, a research assistant professor of environmental studies, with a student research team, found that climate change will reduce maple syrup production in Vermont and New Hampshire by the end of the century.

Making academic work relevant both locally and globally is a central principle at Dartmouth. Faculty from Dartmouth’s Department of Biological Sciences and Department of Education and from Thayer School of Engineering will join the Guarini School of Graduate and Advanced Studies on a five-year project to create new science, technology, engineering, and math (STEM) programs for students and teachers in rural New Hampshire and Vermont. And Dartmouth engineers have joined researchers from around the world on the largest polar expedition in history—The “Multidisciplinary-Drifting Observatory for the Study of Arctic Climate” (MOSAiC)—to better understand the scale of climate change and what that means for the planet.

While in popular culture, Visiting Professor of Middle Eastern Studies Ezzedine Fishere was named the second Jamal Khashoggi fellow at The Washington Post. Dawnland, a documentary co-produced by Samson Occom Professor of Native American Studies N. Bruce Duthu ’80, won an Emmy award for research, and a prime number theory equation by mathematics professor emeritus Carl Pomerance turned up on a whiteboard on the set of the TV show The Big Bang Theory.

View a list of top stories. And read the two previous stories showcasing some of the year’s top stories and highlighting student accomplishments.