Davos Interview: Hanlon on the Promise of Higher Education

As the village of Davos, Switzerland, was gearing up for this week’s World Economic Forum, President Philip J. Hanlon ’77 visited the country on a trip that included stops with alumni groups. While there, he and leaders from business, industry, and other organizations participated in a series of interviews called Davos 2020, produced as a supplement to the Davos sessions, which began today and run through Friday.

“In today’s landscape of technological and social transformation, the challenge for the education sector has never been greater to produce a next generation ready to tackle complexity, diversity, and change,” said former Sky News media company anchor and foreign correspondent Andrew Wilson, who conducted the interviews. “Ivy League college Dartmouth says a liberal arts curriculum has never been more relevant to create the necessary communication skills and lateral thinking required for the 21st century.”

The interviews, also available on CBS News, feature leaders from technology, finance, manufacturing, travel, food, sustainability, and other sectors talking about the future and their place in it.

President Hanlon spoke with Wilson about Dartmouth as the institution looks ahead after a year of celebrating its first 250 years. He noted that a liberal arts education is the foundation for success in all fields.

”What is the promise of higher education for students? It’s a transformed quality of mind, keen analytic skills, having a commitment to explore every question with an open mind, gather all available evidence—not just that which suits your world view—being able to separate fact from fiction, having the reasoning skills to apply this evidence to draw a conclusion, and then being able to explain it to people.

“For the global economy, it’s to create a workforce that unleashes those reasoning skills on the world’s greatest problems.”

Hanlon and Wilson spoke beside a wall of windows at the InterContinental Davos that revealed the snow-covered village below, experiencing a few days of tranquility before thousands of visitors would arrive for the economic forum.

“Dartmouth, like Davos—it’s a destination,” Hanlon said. “You don’t happen there on the way to someplace else. You go there with a purpose, the purpose to enter this amazing academic community. And like Davos, it’s in a remarkably beautiful part of the world.”

Susan J. Boutwell can be reached at susanjboutwell@dartmouth.edu 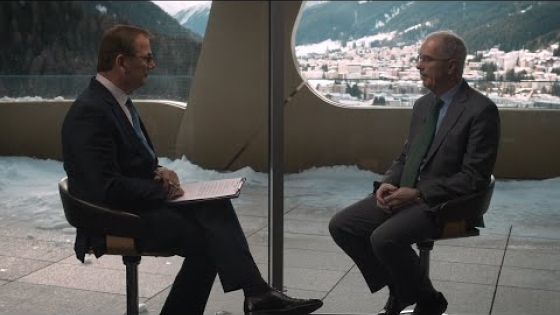