Matthew Delmont kicks off MLK events with a reminder that King’s struggle goes on today. 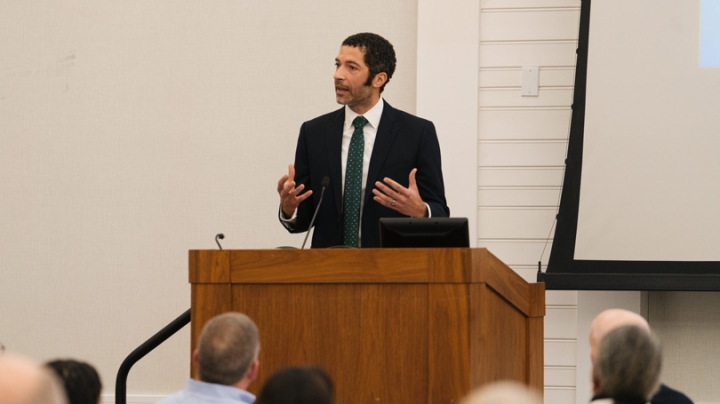 Speaking at the employee breakfast that kicked off Dartmouth’s month-long Martin Luther King Jr. celebration, history professor Matthew Delmont warned against the temptation to focus on the familiar and comforting parts of King’s words and legacy, which can distort a true understanding of his life and the larger goals of the civil rights movement.

Delmont, the Sherman Fairchild Distinguished Professor of History, pointed to the iconic “I have a dream” speech, saying, “In the decades since King spoke these words, people with goals very different from King’s have taken this sentiment—to judge not by the color of one’s skin but by the content of one’s character—to argue that public policies, laws, and institutions should not pay attention to racial identities, and instead, to advocate for ‘colorblind’ policies that often entrench racial inequality.”

That famous speech on the steps of the Lincoln Memorial, Delmont told some 170 people gathered in the Hanover Inn ballroom on Monday morning, was part of the 1963 “March on Washington for Jobs and Freedom,” where more than 200,000 people demanded better housing, education, and health care, and King denounced the “unspeakable horrors of police brutality” and the denial of voting rights faced by black Americans in both the North and the South.

Under the theme of “Rise Together!” the event began at the annual breakfast with Evelynn Ellis, vice president for Institutional Diversity and Equity, singing the hymn “This Is My Song,” accompanied by Selina Noor ’22 on the piano.

MLK events continued Monday evening with a candlelight vigil hosted by the Alpha Phi Alpha fraternity, which led a procession from Cutter-Shabazz house across the Green, and a keynote address, “Of Silence and Words,”  by Kianny Antigua, a senior lecturer in Spanish and a poet, translator, and fiction writer.

Upcoming events include a speech by civil rights attorney, minister, and Harvard professor Cornell Brooks at a multifaith celebration on Sunday, Jan. 26, in Rollins Chapel, hosted by the William Jewett Tucker Center for Spiritual and Ethical Life, and the annual social justice awards honoring members of the Dartmouth and Upper Valley communities starting at 5 p.m. on Thursday, Jan. 30, in Filene Auditorium.

Delmont, whose research and teaching focus on African-American and U.S. history, suggested two responses to the problem of turning King into a glossy and comfortable figure. First, he said, it is important to remember the difficult fight, led by his widow Coretta Scott King, to create a national holiday in his honor. And second, he urged his audience to read and study the challenging, reproaching, and inspiring words and writings King left behind.

Coretta Scott King, a civil rights leader in her own right, began the fight for the King holiday just days after her husband was shot down in Memphis on April 4, 1968, Delmont said. President Ronald Reagan signed the King holiday bill into law in November 1983, but the fight to win recognition for the holiday in the individual states continued for another 17 years until 2000, when New Hampshire became the 50th state to declare a state holiday for Martin Luther King Jr.

“In some ways I’m glad that the state was one of the last to approve the King holiday, because it can help ensure that we don’t take the holiday for granted. When we gather on the third Monday of each January, we should thank Coretta Scott King and the local organizers who fought to make this holiday a reality,” Delmont said.

Finally, said Delmont, it is important to remember that King’s work and writing, from “Stride Toward Freedom,” King’s 1958 memoir of the Montgomery bus boycott, to his 1967 anti-war sermon at New York’s Riverside Church, challenged, inspired, and goaded all people of good will to rise up against racism, poverty, and militarism, and to keep up the fight for economic and social justice.