At the Hood: Sitting (Very Still) for Tintype Portraits 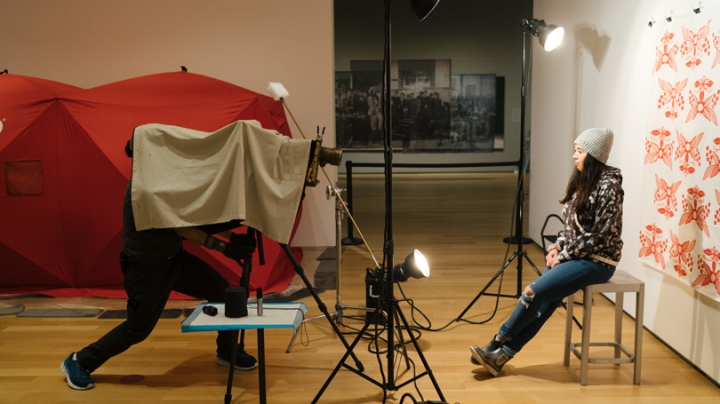 Photographer Will Wilson makes a tintype portrait of Gabe Canfield ’21 as part of an exhibit at the Hood Museum of Art. (Photo by Eli Burakian ’00)
1/15/2020
Body

The Hood Museum of Art is displaying photographic portraits that look as if they were made hundreds of years ago. But in fact, the pictures are only a week old. For five days last week, on the second floor of the museum, photographers Will Wilson and Kali Spitzer asked gallery visitors to pose in front of vintage tintype cameras favored by itinerant photographers in the late-19th and early-20th centuries.

Through a “wet plate collodion” process, a metal plate is sensitized to light with salted collodion and silver nitrate; the image is captured and developed within 20 minutes. For this quick turnaround, Wilson and Spitzer needed a portable darkroom, which they set up in a bright red nylon ice fishing tent.

The Hood recruited students and other community members to sit for the camera, and then, in the tent, watch their images slowly take shape as chemicals created first a negative and then a positive image.

“It’s part of CIPX Dartmouth—CIPX is an acronym for the Critical Indigenous Photographic Exchange. And this residency builds on a body of work that Wilson, who’s a citizen of the Navajo Nation or Diné, began in 2012,” says Powell.

“He began the project in response to the early-20th-century photography of Edward Curtis and his series  about the North American Indian. Curtis was well known for using the phrase ”the vanishing Indian“ to refer to the Indigenous people he photographed. Like many people of his time—photographers, anthropologists and the general public—Curtis thought that it was important to capture these images of Native peoples because, through westward expansion and assimilation policies, he thought they were going to disappear.”

But though Native Americans have been targets of discrimination, they have not, of course, disappeared. “So this project is really Will and Kali’s engagement with that history, trying to reframe our historical understanding,” Powell says.

Wilson’s first subject was Gabe Canfield ’21, an environmental studies major and Native American studies minor from Ketchikan, Alaska. She is Iñupiat, a group of Alaskan natives belonging to the Inuit community. For her portrait, she chose to wear something she treasures, a handmade butterfly-print tunic called a “qaspeq.”

Before sitting for her portrait, Canfield did something Wilson captured on video. The manufacturer’s label on the red tent serving as a temporary studio is “Eskimo,” a word that many Artic Indigenous peoples consider a derogatory term because it was widely used by nonnative colonizers. Wilson gave Canfield a big black marker and asked her to black out the offending word. Canfield chose to replace it with the phrase “We Are Iñupiaq.” 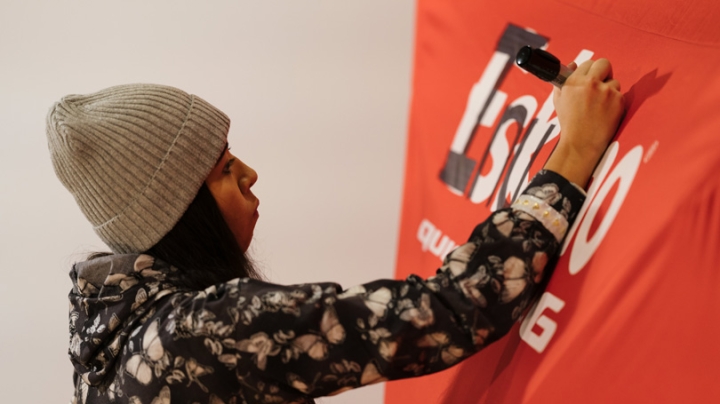 Gabe Canfield ’21 replaces the label on a portable darkroom tent with “Iñupiat,” the tribe she belongs to. (Photo by Eli Burakian ’00)

Wilson combines video and still photography to create a hybrid art form, marrying a 19th-century photographic process with 21st-century augmented reality. “I make a still image, the tintype, and at the same time we have a video camera rolling,” he says. “I’ve developed an app, a free download on the app store called ‘Talking Tintypes,’ and it enables you to link the two.”

Canfield promised not to move as much as an eyelash as Wilson, at his camera, slid in a metal plate coated with emulsion, ducked his head under a piece of fabric shutting out the light, and took the shot, producing a blinding flash. He removed the wet plate, took it into the tent, and lowered it into a shallow basin filled with a liquid developer solution. 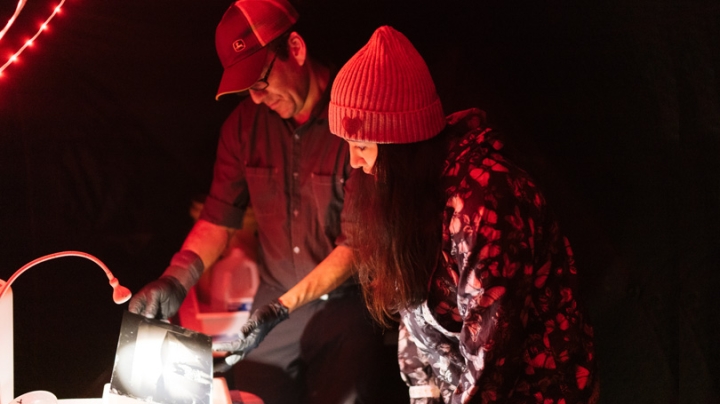 Photographer Will Wilson (left) shows Gabe Canfield ’21 how he is developing her tintype portrait in a portable darkroom at the Hood Museum. (Photo by Eli Burakian ’00)

Wilson has done this kind of work all over the world. But Dartmouth, he says, is an especially fitting place for it. “As part of its charter, the College takes responsibility to educate Indigenous people, whose land we are standing on right here.”

With these residencies, Wilson also seeks to educate the broader community about Native American culture. Powell met him several years ago at Tufts University, where she had her own portrait made.

“I’m Osage, and my work is all about issues of Native representation and art,” she says.

Instructed to hold still for seven seconds, Powell attempted what she called “a Mona Lisa smile.” When she watched her face emerge in Wilson’s portable darkroom, she was stunned to find that she looked remarkably like her grandfather.

It was a telling moment that linked her to family heritage. Yet, at the same time, the camera made her skin look darker than it really is. That made her ponder “what the technology itself did to these images and how the actual photographic process and the technology of the time really, more so than Curtis, shaped our understanding of Native peoples.”

The CIPX Dartmouth exhibit will be on display through March 27.