Mars Lab Asks: Where There Was Water, Was There Life? 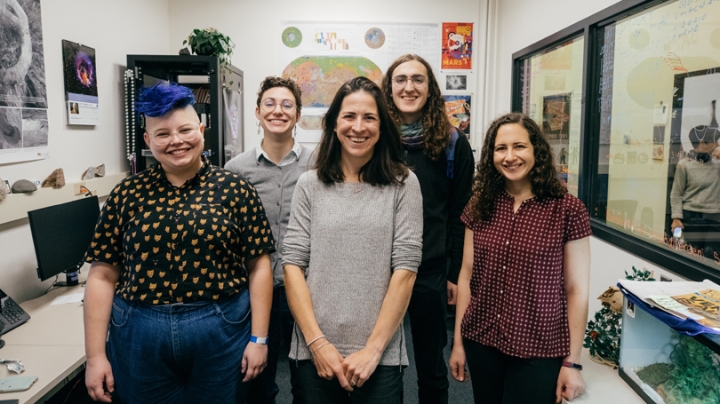 It’s a long way from Star Trek’s spaceship USS Enterprise to a computer lab in Fairchild Hall. But Assistant Professor of Earth Sciences Marisa Palucis has made the journey, at least in her mind. As a girl, she was a big fan of the sci-fi TV series.

“That was my dream job, to be a Starship captain,” she remembers.

Now, in her Planetary Surface Processes Computing Lab, Palucis captains a research team of graduate and undergraduate students and a postdoctoral fellow who peer online every day at topographical maps indicating where, 2 billion to 3.5 billion years ago, there might have been water. The pictures captured by NASA’s Mars Curiosity rover raise the tantalizing possibility that there was once life on the red planet.

“It’s really exciting because we have these discoveries from the Curiosity rover and a lot of us have been looking at this one crater, called Gale Crater,” says Palucis, who came to Dartmouth in 2017. As a geomorphologist, she studies how landforms and their formational processes inform us about past climates.

“What my group is doing is providing the regional context for what the Curiosity rover is seeing and showing that Gale Crater wasn’t the only place where there were large, dynamic lakes on Mars. Gale was likely connected to a very large groundwater system and surface water. This whole region of Mars would have been covered in lakes 3.5 billion years ago. That’s an important finding, that the reservoir of near-surface and surface water on Mars was probably quite large.”

And Palucis says where there was water, there may have been life—at least simple life forms. “We probably won’t find any dinosaur bones up there, but there could still be microbes. Though they would have needed stable water volumes, temperatures, and pHs, over long periods of time, to have evolved there. As life tends to do, it may have managed to survive extreme climate change on Mars.”

Palucis notes that climate change is not unique to Mars; it’s happening here on Earth, though in different ways, and apparently for human-made reasons. But even though there were no cars or coal-fired plants influencing temperatures on Mars, Palucis says scientists base their climate models for Mars on Earth climate models. “Early on, I think the two planets were more similar,” she says. “But Mars being farther from the sun, and smaller, they diverged over time.”

NASA will send another rover to Mars this year (Mars 2020), and this one won’t just take photos—it will collect samples of terrain. Working closely with Justin Strauss, assistant professor of earth science, and William Leavitt, assistant professor of earth science and the Simons Early Career Investigator in Marine Microbial Ecology and Evolution, Palucis expects Dartmouth to be on the front lines of research into Mars’s distant past. “We’ll be a magnet for new talent, and I want our lab to grow,” she says.

That’s an exciting prospect for lab member Melanie Kanine ’20. “I’m studying a series of paleo-lakes on Mars, trying  to get at how much water there was, when it was there, how long it was there, trying to answer the overarching question, ‘What was the paleo-climate on Mars like, and how has it changed over time?’ ”

Postdoctoral lab member Frances Rivera-Hernandez says the Mars rover is advancing research at a dizzying pace. “We actually have footage of Curiosity landing. And that, in itself, is amazing.”