Dartmouth Students Turn Out for the N.H. Primary 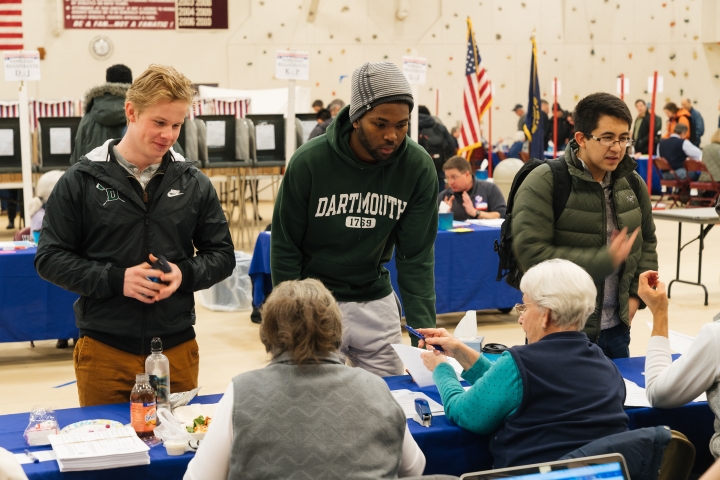 Dartmouth students turned out in force to cast their ballots in the New Hampshire primary Tuesday, with more than 1,000 people, a majority of them students, registering to vote at the polls.

Walking out of the Hanover High School polling place, Marco Allen ’23 said growing up in a working-class family in North Carolina, he was aware of politics from an early age. When he came to Dartmouth, he saw the chance to vote in the first-in-the-nation primary as a great opportunity and decided to exercise his right to vote in his new home.

“North Carolina is also a big battleground state, so we do get a lot of attention, but we don’t normally get much of a say in choosing the candidate that we end up voting for,” Allen said. “It felt really important to me to vote here, especially in this election where the Democrats are at a historic turning point. I think it is very important here to have your voice heard.”

Nearly 18 percent of the 5,723 votes cast in Hanover were from voters who had just registered.

The New Hampshire primary caps a year of stops in Hanover by presidential hopefuls. The state’s first-in-the-nation primary gives every Dartmouth student the opportunity once in their four years to experience the parade of candidates through the state, many of whom stop at least once at Dartmouth.

Leah Brams ’20 said she was undecided right up to the morning of the primary. She said she found it hard to commit to a candidate with so many people talking about electability and the importance of voting strategically. In the end, she said, she went with her gut.

Voting was steady throughout the day, with quickly moving lines and an efficient same-day registration operation. Staff from Dartmouth’s Office of Residential Life were on hand beside the registration table to verify students’ campus residency, as required for registration.

Kimberly Kirkland, a legal observer from the New Hampshire Coordinated Democratic Campaign, was watching the polls at the high school in the afternoon. “This is the most efficient registration of new voters, new registrants, I’ve ever seen, and they’re getting hit with big numbers. It’s no small feat,” she said.

One of the poll workers checking IDs against the list of registered voters and handing out ballots was John Carey, associate dean for the social sciences and a government professor. Carey’s work focuses on elections, constitutions, and the politics of Latin America.

“It’s one thing to study this stuff, but to spend a day at the polls, it’s a good lesson in the nuts and bolts of elections,” he said. “And there’s so much more attention now on the way we check voter IDs and the way people get registered, and stay registered.”

“There were a lot of students coming through. It was good to see them,” he added.

Ellie Geier ’23, who was heading back to campus after voting for the first time, said it was a Dartmouth government class that prompted her to make the effort to register and vote.

“I’ve got a class right now where we’re learning about democracy,” Geier said. “It’s interesting to learn about countries where people really don’t have the ability to exercise their voice. I was kind of unsure about voting today, but after that class I was like, I am so lucky to have the right to be able to make an impact on who is going to be our leader. I felt it was a responsibility for me to get out and vote today.”

A total of 5,723 votes were cast in Hanover, 5,418 in the Democratic primary and 305 in the Republican primary. Here’s how the votes added up: