The former Obama administration official’s Feb. 27 talk is hosted by the Dickey Center. 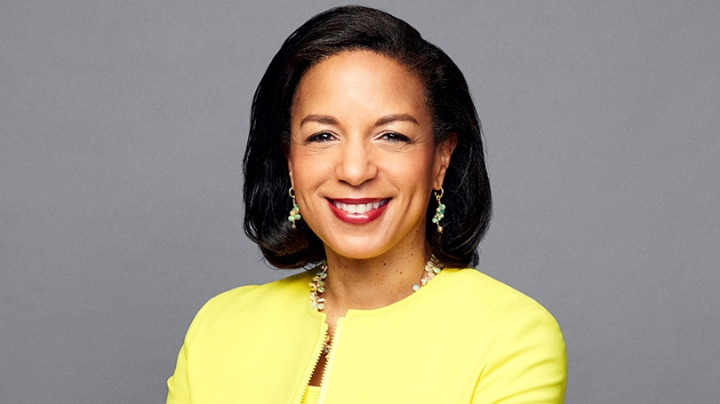 Former U.S. ambassador to the U.N. Susan Rice will appear with Dickey Center Director Daniel Benjamin at a public event on Feb. 27. (Photo courtesy of the Office of Ambassador Susan E. Rice)
2/19/2020
Body

Susan Rice, the former U.S. ambassador to the United Nations and national security adviser to President Barack Obama, will speak about her career in public service at a Feb. 27 event sponsored by the John Sloan Dickey Center for International Understanding.

Rice will also discuss her new memoir, Tough Love: My Story of the Things Worth Fighting For, in conversation with Daniel Benjamin, the Norman E. McCulloch Jr. Director of the Dickey Center, from 4:30 to 6 p.m. in Spaulding Auditorium at the Hopkins Center for the Arts. Rice will hold a book signing following the public discussion.

Benjamin, who has known Rice for many years, says the former ambassador is a compelling figure for her life story as well as her professional achievements.

“Yes, she is one of the foremost foreign policy thinkers and practitioners of our times—and I feel fortunate to have known and worked with her for more than 25 years, since we were both in the Clinton White House—but she also has had an extraordinary upbringing and set of experiences as an adult, and she has reflected deeply on those experiences in her memoir,” Benjamin says. “Everyone talks a lot about leadership. Well, we can learn a lot about that vital subject by hearing about all the ingredients that went into this remarkable leader’s career, and not only her views on foreign policy.”

Before her appearance in Spaulding, Rice will meet with first-year students in the Dickey Center’s Great Issues Scholars program; she is also scheduled to meet with Dickey Center postdoctoral fellows earlier in the day.

The Great Issues Scholars program, which is marking its 10th year at the Dickey Center, enables first-year students who have an interest in international affairs to meet and talk with renowned public officials, scholars, and journalists.

The evening event with Rice and Benjamin, part of the Mary and Peter R. Dallman 1951 Great Issues Lecture series, is free and open to the public, but tickets are required. For more information and to obtain tickets, visit the Hopkins Center event website.