Students Bring Research to ‘The Sweet Science of Bruising’ 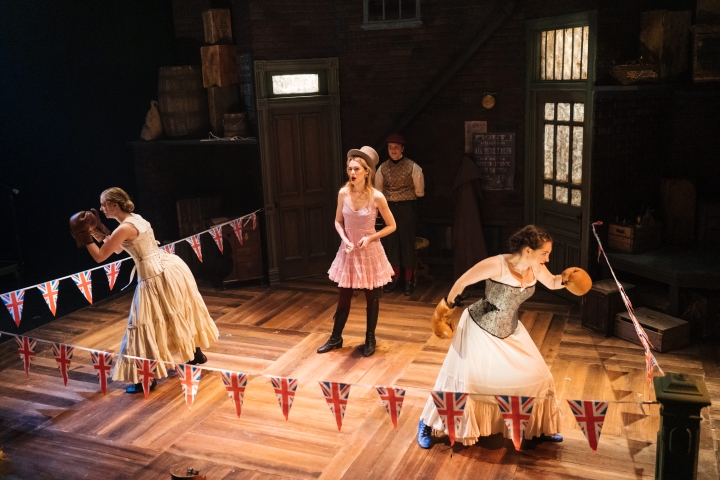 In the ring: Brooke Bazarian ’20, right, prepares to fight Kerrigan Quenemoen ’20 in a boxing match emceed by Jacqueline Byrne ’22, in a scene from the dress rehearsal of The Sweet Science of Bruising. (Photo by Eli Burakian ’00)
2/20/2020
Body

The Department of Theater’s winter main stage production, The Sweet Science of Bruising—which opens this weekend in the Moore Theater at the Hopkins Center for the Arts—gives audiences a ringside view of the lives and struggles of women boxers in 19th-century England.

The production—which focuses on the lives of four women from different backgrounds who discover independence through boxing—is the American debut of the critically acclaimed 2018 work by British playwright Joy Wilkinson, who will be in Hanover to attend the opening and talk with the audience and students.

The play’s director, Peter Hackett, the Avalon Foundation Chair of the Humanities and a professor of theater, says this kind of cross-campus collaboration between the theater department and Department of English and Creative Writing is welcome.

Dever’s students have read the play, observed rehearsals, and whittled dramaturgical notes from 500 words (the maximum for the first draft) to about 200 words—an assignment designed to help students write concisely and clearly for a nonspecialist audience, Dever says.

“It’s been an exercise in minimalism for me, and in how much can you assume a person knows before walking into the play,” Miller says.

Another of Dever’s students, assistant stage manager Lucy Biberman ’23, says, “It’s been interesting in rehearsal to hear things come up relating to dramaturgy. It’s neat to see the play through a lens different from the way in which you’re involved in it. I think this is a really important show. This play speaks to issues that women have been fighting for for hundreds of years.”

“I was looking for a play to direct that had fantastic women’s roles,” he says. “The issues in Sweet Science are very contemporary, and because it’s set in the Victorian era, in 1869, I thought there’d be an opportunity for the students to research the social and cultural background of this play in order to perform it.”

It happened that Dever had also seen the production in London, she says. “Scroll forward a couple of months, I’m reading the Hop program for this year, and there’s the play. I thought, wouldn’t it be cool to focus my course around the play? And maybe Peter would be willing to collaborate. So that’s what we’ve done.”

Brooke Bazarian ’20, a theater major who plays boxer Polly Stokes, saw the play during the FSP. “It was in this beautiful old music hall that felt like it was built for this show,” she says. “My friend and I knew that we wanted to audition, and we left the theater glowing because we each had our eyes on a specific part that was speaking to us.”

Bazarian’s role required her to learn the fundamentals of boxing and fight choreography. “I’m like addicted to boxing,” she says. “I get giddy to go to rehearsals because there’s such a release of energy. There’s so much power in it.”

While in London, Hackett and the students had the opportunity to meet Wilkinson, and Hackett invited her to see the show in Hanover.

“It’s not every day that you get to see a production and then just chat with the playwright about questions you have,” Bazarian says. “The production is so rooted in history that it’s almost surreal to then see the author in front of you in the present.”

Bazarian is studying the play for another English class—Lecturer Christie Harner’s “’Postmodern’ Britain: Fictions of Pluralism, Dystopia (and Brexit).” Like students in Dever’s class, Harner’s students have also attended rehearsals and will have the chance to ask questions of Wilkinson when she visits their class.

Harner says she learned of the play from Dever. “I was thinking about the book list for my course, which is focused around the question of contemporary literature in Britain. All but one of the texts are very contemporary, and I wanted them to be in dialogue with the past, because so much contemporary British fiction is in dialogue with 19th-century fiction, especially. As soon as Carolyn mentioned the play, I thought, this is perfect.”

The Sweet Science of Bruising opens Feb. 21 and continues through March 1. Tickets are available on the Hopkins Center website.