Students Get Front-Row Seats to the Primary Finale

Days away from the New Hampshire vote, campaigns make final pitches at Dartmouth.

In the days before Tuesday’s New Hampshire primary, Dartmouth students have enjoyed front row seats as the presidential candidates shifted attention from the inconclusive Iowa caucuses to vie for the New Hampshire vote in hopes of a definitive showing in the state’s first-in-the-nation race.

This weekend, Democratic candidates will practically be bumping into each other on campus. Former South Bend, Ind., Mayor Pete Buttigieg is scheduled to be at the Top of the Hop at 2:30 p.m. on Saturday; Sen. Amy Klobuchar has an event in Alumni Hall at 5 p.m. Saturday; Sen. Bernie Sanders will be at the Hanover Inn at 1:30 p.m. Sunday; and Andrew Yang will have an overlapping event in Alumni Hall at 1:45 p.m. Sunday.

Former Massachusetts Gov. Deval Patrick spoke on campus Monday; and Republican candidate Joe Walsh, a former congressman from Illinois, spoke at a policy forum on Wednesday in what turned out to be one of his last events as a candidate. Walsh dropped out Friday.

“To be this close to the political process is the most amazing experience you can have in college,” said Sana Nadkarni ’22, who attended the Patrick event. She said she has worked on state-level campaigns in Massachusetts, but being able to just go to the Top of the Hop and hear presidential candidates “makes me love Dartmouth even more.”

Potential primary candidates started showing up on campus nearly two years ago around the 2018 midterms. Since then, nearly 20 presidential hopefuls have come through, including all of the top contenders. Some, like Buttigieg, Sanders, Warren, and Yang, have had multiple events here.

Ethan Lang ’23, a member of the College Republicans, spoke with Walsh after the event at the Nelson A. Rockefeller Center for Public Policy Wednesday and secured a promise from the GOP Trump challenger to return to campus for more discussions about his views on the future of the Republican party.

“I’ve come out to see Weld, Walsh, and every Democrat whose come through,” said Lang, who said he appreciates the political access the primary offers even though he still plans to vote by absentee ballot in his home state of Delaware.

He said the primary was one of the reasons he came to Dartmouth. “Being able to not just sit and debate about politics, but to experience so much living politics is an opportunity of a lifetime. I like to have discussions, even with people I disagree with. Being at Dartmouth has been a very good, humbling experience. You can see all perspectives and hear all voices.”

On Feb. 11, the polls are open from 7 a.m. to 7 p.m. in the Hanover High School gym at 41 Lebanon St. All students who have registered to vote in Hanover can check in at the polls with a Dartmouth ID, said Hanover Town Clerk Betsy McClain.

Eligible voters who have not yet registered will be able to register at the polls on Tuesday. All students who are U.S. citizens, live in New Hampshire, and will be at least 18 years old on election day have the right to vote in the state.

McClain said students can register at the polls with a Dartmouth ID, a passport or other proof of age and citizenship, and proof of domicile—in other words, where they live on campus. Staff from the Office of Residential Life will be present at the polls to provide students with documentation of residence. Students who live off campus can bring an electric bill or lease or an image of those documents on their phone.

Students and other eligible voters who do not have a form of ID or proof of domicile or citizenship when they arrive can sign appropriate affidavits at the polls and will be permitted to cast a ballot that will be counted on election day. The secretary of state’s office will follow up to verify registration.

Voters will receive a primary ballot for the party they selected when they registered. Independents can declare for either party at the polls and receive that ballot.

In a campus-wide email this week, President Philip J. Hanlon ’77 urged everyone to get out and vote.

“Due to the important role the New Hampshire primary plays in this process and the intimate nature and tradition of retail politics in our state, all of us, as members of the Dartmouth community, have the opportunity to engage directly and repeatedly with candidates and ideas from all political parties,” President Hanlon wrote.

“Whether voting in New Hampshire or Vermont, or by absentee ballot in another state, engaging in our nation’s democratic process is both our right and our responsibility,” he said. 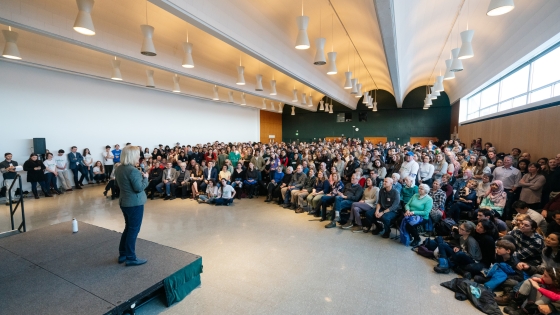