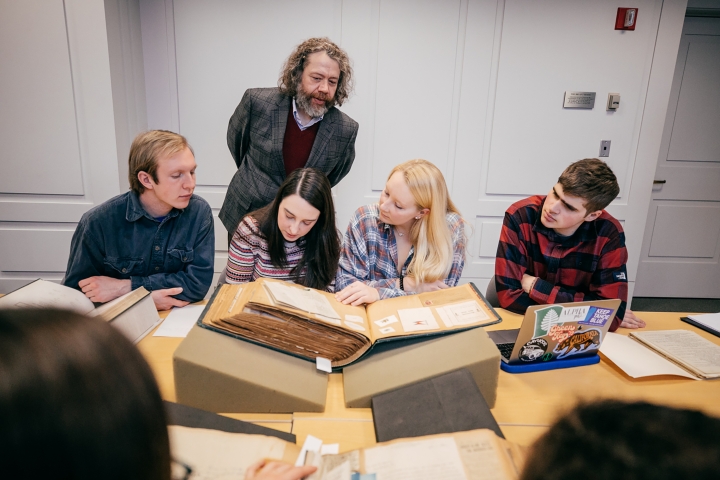 It is the students’ third visit to the archive, so they need little prompting to dive into the documents that Head of Special Collections Jay Satterfield has arrayed on the table in front of them: the original constitution of the Dartmouth Outing Club; two “mem books” or scrapbooks collected by DOC and winter carnival founder Fred Harris, Class of 1911; a logbook from the DOC cabin on Moose Mountain; and a variety of memorabilia from the heyday of winter carnival, which Satterfield pinpoints as 1939 and 1940—including a sterling tiara once used to crown the “Queen of the Snows,” which Satterfield encourages students to try on.

What do these early 20th-century records have to say to students of 19th-century American literature who are themselves about to experience Dartmouth’s 110th winter carnival?

As Chaney tells the class, the 19th-century texts the group has been reading—works by Henry David Thoreau, Caroline Kirkland, Frederick Douglass, Nathaniel Hawthorne, Herman Melville, and others—directly shaped how Harris and his classmates constructed their relationship with the natural world.

“A general question when looking at this information is, how is this influenced by cultures that came before? And you guys are almost expert in that,” Chaney says. “You’ve been looking at the discourses of maybe 50 or 60 years prior to the invention of these activities, and the ways of talking about them are informed by that literature.”

Satterfield leads the students in a discussion on the DOC’s roots as a competitive winter sports organization. One student observes that Harris’ mem book makes the DOC of 1911 seem “more like a varsity team than it is now.”

“It seems like it was kind of cliquish because it only appealed to a certain segment of the population,” another student says. “Then you realize that Dartmouth at this time was pretty homogenous, so it may have been pretty inclusive” of the students who were here at the time.

Satterfield agrees. In the beginning, he says, the DOC and carnival “formed for winter sports, sort of embodying the ‘Dartmouth Man’ ideal—this guy who’s athletic, outdoorsy, is going to become a successful businessman.”

By 1940, students can see from photos, contemporaneous articles in The Dartmouth and Jack-o-Lantern, and other artifacts, the focus of winter carnival had transformed from a celebration of individual athletic prowess in the wilderness to a raucous party that brought hundreds of women—students from Smith, Mount Holyoke, and other women’s colleges—to campus on special trains chartered for the occasion. The annual event drew attention from national media outlets like LIFE magazine and Reader’s Digest. 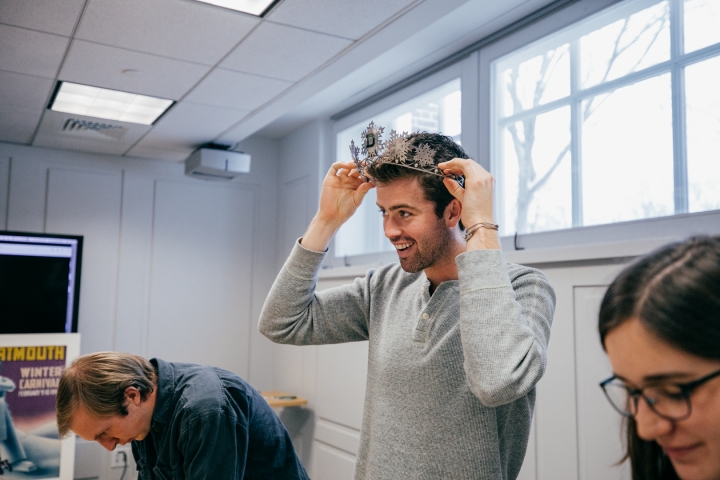 Of photos of women crowned Queen of the Snows—who were sometimes literally pulled off the street to be judged—English major Victoria Quint ’22 says she was struck by how “not enthusiastic” they look.

“It was something I hadn’t really thought about. What would I have done if I were a woman at a female college in 1940 and I got invited here—would I have come? I don’t know, probably not,” Quint says.

Math and economics major Sam Barrett ’20 says he was drawn to Chaney’s class because of its emphasis on the historical roots of some of Dartmouth’s traditions. Looking at texts from archives made him realize that his own Dartmouth experience has antecedents.

“What I’ve found striking is how many things you feel as though you’ve had an original thought about, and then you find that somebody 150 years ago felt the same way about a similar environment,” Barrett says.

Quint calls the opportunity to visit Rauner with the class “an amazing experience.”

“Last week we were here reading accounts from a literary journal—students who had gone out for a weekend hike and then written about it,” she says. “We went around the circle saying, yeah, we all hiked Moosilauke, they hiked Moosilauke. We can see that continuity between what Dartmouth students did in the 19th century and what we are still doing now. And being able to touch their newspapers and their scrapbooks gives us a more personal sense of what wilderness meant to specific people who are as close to us as you could get in an historical archive.”