The group of faculty and staff will lead gender-bias conversations with their peers. 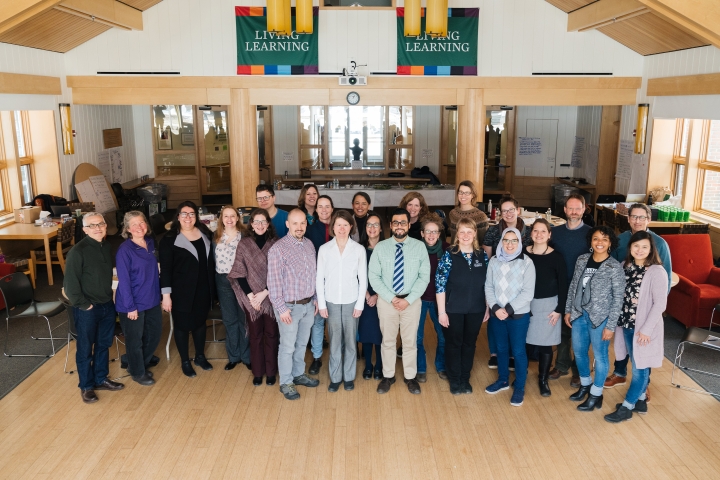 Faculty and staff at their most recent C3I Ambassador training session to facilitate conversations about gender bias and how to change it. (Photo by Eli Burakian ’00)
3/10/2020
Body

This winter, 17 volunteers—faculty and staff from throughout the institution—have spent more than 20 hours training to facilitate conversations within their own departments about gender bias and how to change it.

The program is part of the Campus Climate and Culture Initiative (C3I), which addresses issues of sexual misconduct and other abuses of power in the Dartmouth community. C3I is one of three initiatives Dartmouth has started in recent years to improve campus climate, along with Moving Dartmouth Forward, an effort to prevent high-risk behavior, and Inclusive Excellence, which is strengthening Dartmouth’s work to increase diversity, equity, and inclusivity.

In the coming year, the inaugural cohort of 17 C3I Ambassadors will be tasked with sharing with colleagues in their home departments the knowledge they’ve gained about how gender bias affects the workplace, and helping to find ways of changing their departmental cultures for the better.

On a Friday in late February, the group gathers in Occom Commons for the last of their two-and-a-half-day intensive trainings, led by C3I Director Theodosia Cook and a team of co-facilitators from the Office of Human Resources, Advancement, Institutional Diversity and Equity (IDE), the Dartmouth Center for the Advancement of Learning, and Information, Technology, and Consulting (ITC).

In a circle, the ambassadors-in-training ask questions and share concerns and advice about the next phase of the program: going back to their departments to help make change. One trainee asks for ideas on how to adapt an activity for her much larger department. Another wants input on navigating tricky power dynamics in his office.

The conversation is a culmination of the group’s work throughout the term, says co-facilitator Erin DeSilva, assistant director of learning, design, and technology in ITC.

“The training followed an arc—we began by doing some personal identity work, and then we got some historical context and data on marginalized communities in higher education,” DeSilva says. “The third part of the training has been on active facilitating—trying to empower the ambassadors to own this information enough to bring it back to the department in the way that’s right for them.” 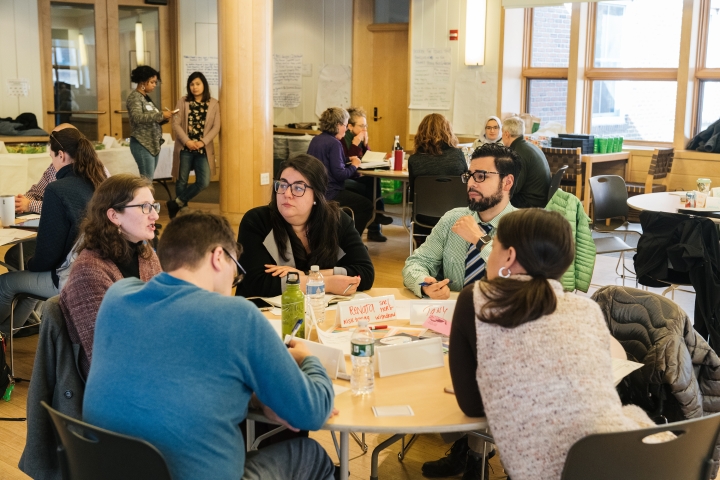 C3I Ambassadors break up into small groups at a training session in Occom Commons. (Photo by Eli Burakian ’00)
Bringing It Back to the Departments

The ambassadors will be basing their department-level programs on, among other tools, a program called “50 Ways to Fight Bias,” developed by Lean In to provide evidence-based information about bias in the workplace.

“It’s one of the most comprehensive trainings for bias in the workplace,” says Cook. “And it has amazing footnotes—every fact links to a research paper or an article. Some people learn with stories, but others want to see and evaluate the data.”

Julie Kalish, a lecturer in the Institute for Writing and Rhetoric who has taught at Dartmouth for 30 years, says it was seeing the engagement of senior leaders at another C3I-sponsored event—a workshop on gender harassment led by a group from the University of Michigan—that inspired her to apply to be an ambassador.

“I had a feeling that this initiative could be different—that there was a lot of work still to do, but that the level of commitment seemed to be different this time,” she says. “So I wanted to do whatever I could to help.”

Rosi Kerr ’97, the director of sustainability, agrees. “I feel like culture change is an all-hands-on-deck thing,” she says. “I was listening to (Provost) Joe Helble and others talking about the C3I initiative, and I felt like, here’s an opportunity for me to put work where my mouth is.”

Assistant Professor of Music Richard Beaudoin calls the training “one of the best things I have ever done at Dartmouth. In my group is a tenured professor, an untenured professor, staff members—so there’s a variety of viewpoints. Our conversations have very much pulled back the veil on how people really feel.”

Kalish says she’s looking forward to bringing her knowledge back to her colleagues with “excitement and a little bit of trepidation,” she says. But she feels prepared by the training. “Being part of this cohort—there’s a sense of community that I’m finding very exciting.”

Giovanni Bosco, the Oscar M. Cohn ’34 Professor of Pharmacology and Toxicology and a professor of molecular and systems biology at the Geisel School of Medicine, calls the ambassador program “an important effort that everyone on campus should be invested in.”

Bosco says he decided to become involved because he wants to change the disparity between his department, which is majority male, and the medical student population, which is about half female.

“I thought it was important for a senior, male, white faculty member to take a position that this is important,” Bosco says. “Hopefully I can be a role model for students and other faculty who care about this.”

“What’s helpful about the ambassador model is that you’re taking people who are already embedded in their department, understand the culture, and have relationships,” says co-facilitator Alexis Kanda-Olmstead, the director of talent management in Advancement. “They can customize their approach so that it will resonate with the people who are in that department. It has an exponential potential for change.”

Associate Professor of Sociology Emily Walton says the program’s model, of training individuals who can be a resource to their own departments, makes sense.

“Faculty might not take it as seriously if IDE or some other entity came in and said, you need to do this training,” she says. “The fact that I’m able to speak to my colleagues as peers brings a different kind of power to the situation.”

Asked what she thinks the Dartmouth community should know about the C3I Ambassadors, Cook doesn’t hesitate. “These ambassadors are taking on a leadership position that has risk,” she says. “They are putting their professional selves on the line to delve deep into these conversations within their departments. That means we have people in this institution who recognize that we have things to work on and who are willing to invest their time. They are supporting the institution, and we as an institution should support them while doing this work.”

Cook is making a big change in her own life—she has accepted the role of chief diversity officer for the University of Colorado, an opportunity she says she could not pass up. But she remains committed to Dartmouth and the success of C3I and the C3I Ambassadors.

“I hope the ambassadors program continues,” she says. “The curriculum is there, the lesson plans are there, we have awesome co-facilitators who can definitely do this work. And it’s a great way for the institution to provide leadership opportunities. This is a program that develops leaders who can show up and hear and consider the people they lead.”

The search for the next director of C3I will be under way soon.