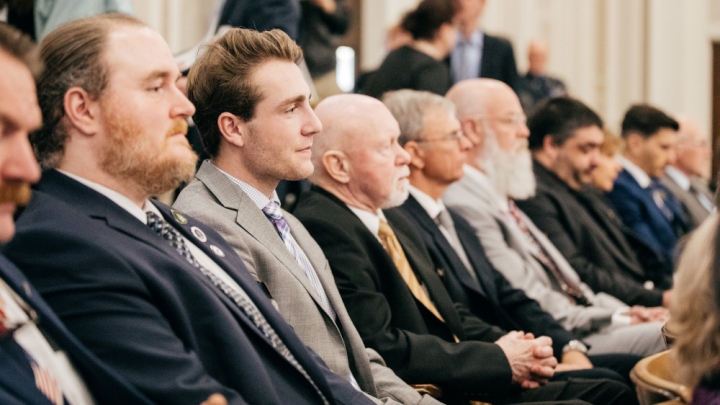 State Rep. Garrett Muscatel ’20, second from left, listens to debate from his seat on the floor of the New Hampshire House after legislators were sworn in for the new session on Dec. 5, 2018. (Photo by Robert Gill)
3/20/2020
Body

In the marathon New Hampshire House session last week, as lawmakers pushed to pass hundreds of bills before the legislative deadline and coronavirus concerns increased by the hour, Rep. Garrett Muscatel ’20 saw the passage of three pieces of legislation he introduced, including a $100 monthly cap on insulin prices, making New Hampshire only the fourth state in the nation to attempt to limit the price of the essential diabetes drug.

Passage of the bill came in the midst of one of the most grueling legislative sessions in recent memory. The House faced a deadline of Thursday, March 12, to finish its work, otherwise all the bills from the session would die. That was complicated by the growing seriousness of the coronavirus alerts. But under House rules, as long as the Thursday session did not adjourn until the work was done, and the chamber maintained a quorum, the deadline is met, no matter how long it takes, Muscatel explained.

He was on the floor of the House into the evening on Wednesday and through the Thursday session until the House adjourned at 4 a.m. on Friday.

While Muscatel was on the House floor, Dartmouth announced that students should not return from spring break, and classes would be conducted remotely. After his breakfast at Lou’s, Muscatel packed up his belongings, left campus, and got on a plane to Hawaii, where he is caring for his grandparents. He has finished all his coursework for graduation, and plans to attend Stanford Law School in the fall, but he is waiting to hear when the legislature reconvenes for “cross-over day,” when bills from the House go over to the Senate, and bills from the Senate cross over to the House. Due to the coronavirus crisis, the legislature is in recess until further notice.

Other legislation Muscatel introduced that passed the House this session include a bill to allow paid compensation for college athletes, a bill to mandate the state department of labor to collect data from businesses on pay differences between men and women, and a bill to allow HIV/AIDS prophylaxis treatment for minors without parental consent.