The professor works to present African-American history to new audiences in new ways. 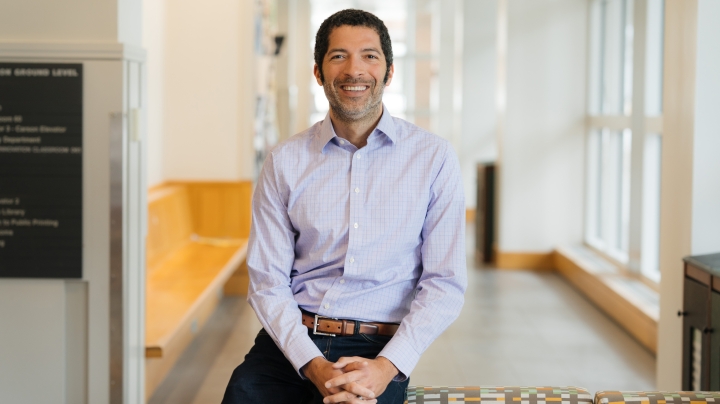 Matthew Delmont, the Sherman Fairchild Distinguished Professor of History, uses multimedia digital scholarship to push his students to think beyond the traditional texts of African American history toward something deeper.

Delmont’s work melds traditional historic sources with newer forms of media, he says. “I’ll look at textual documents, but I’ll also look at what was going on in terms of the most popular television show of the era, and I’ll look at music, and say, high school yearbooks and different pop culture memorabilia I can get from eBay.”

In his classes, such as “History of Civil Rights” and the co-taught “#EverythingHasAHistory: Understanding America Today,” Delmont asks his students to use digital databases to find and post newspaper articles from the general-circulation and black press, photographs, movie clips, advertisements, and materials from other sources that are related to the era and events they are discussing in class. Students then post these materials on Canvas, the class learning-management website, as a prompt for class discussions.

“I’ll encourage my students to think about what it means to have a photograph as a source, or a song as a source, or a letter or an oral history interview, while not viewing one kind of source as better or ‘more legitimate’ than another one, but understanding each different kind of source can give us a different point of entry into these histories.”

Many students have been trained in high school to view historic texts more seriously than the products of popular culture, Delmont says, but when they see that all forms of media are part of the historical record, they embrace it, because media is already everywhere in their lives.

“Ultimately students are excited about it because it opens a much wider range of possibilities, both in terms of materials and in terms of the kind of stories you can tell and the kind of people you can talk about,” he says.

In Delmont’s most recent work, Black Quotidian: Everyday History in African-American Newspapers, he applies this scholarly approach to a digital book. The open source, multimedia project draws from an extensive archive of digitized African American newspapers, supplemented with television news footage, photographs, advertisements, and commentary text from Delmont for every day of the year.

“I wanted to find a way to talk about African American history that didn’t just focus on either ‘marchers or martyrs,’ ” he says. “The idea is to touch on some of the iconic figures—King, Tubman, Parks—but then, more importantly, be able to talk about a host of other people, some kind of middling famous, some largely unknown, as a way to encourage students and everyday Americans to appreciate the range and complexity of African American history.”

The reader can move through the work by date or follow themes such as youth, politics and voting, sports, and civil rights and black freedom. While Delmont has supplemented his previous scholarly work with companion websites linking multimedia sources, Black Quotidian is his first completely digital work, part of a new open-access digital publishing project at Stanford University Press.

“The biggest concern for academic authors is to reach the broadest audience. A webbook has 10 or even 100 times the reach of a traditional scholarly text. So the idea is college students, high school students, teachers at all levels, journalists, and people who have an interest in history can have access to the complexity of African American history,” Delmont says.

His next project, which will include research by Dartmouth undergraduates, is a book about the African American experience during World War II. Titled Half American: African Americans Fighting World War II at Home and Abroad, the book has been supported by a Guggenheim fellowship and is under contract with Viking Books. It will draw on some the same resources that formed the foundation of Black Quotidian, Delmont says. He is working with more than a dozen undergraduate research assistants to gather, sort, and analyze materials about the war era from historical newspapers and archives.

Uncovering the everyday details and the lessor-known people from African American history is a recurring theme in Delmont’s work. For example, the entry for Feb. 24 in Black Quotidian highlights a Feb. 24, 1934, article in the Pittsburgh Courier by historian Carter G. Woodson under the headline “ ‘Forgotten Negroes’ Who Played Major Roles in the Race’s March of Progress.”

Delmont’s entry about the article quotes Woodson, who, in 1915, helped found the Journal of Negro History, saying, “If a race has no history, if it has no worthwhile tradition, it becomes a negligible factor in the thought of the world, and it stands in danger of being exterminated.”

Delmont then writes, “Reading articles by and about Woodson from the 1920s and 1930s has helped me better understand a time when this iconic figure in black history was someone with whom ordinary black Americans could correspond or engage.

”As a historian, these articles have also helped me situate myself in the long tradition of scholars and educators who have worked to present African-American history to new audiences in new ways.“